Forecasters say we’re in for 2 to 4 inches, starting mid-morning. 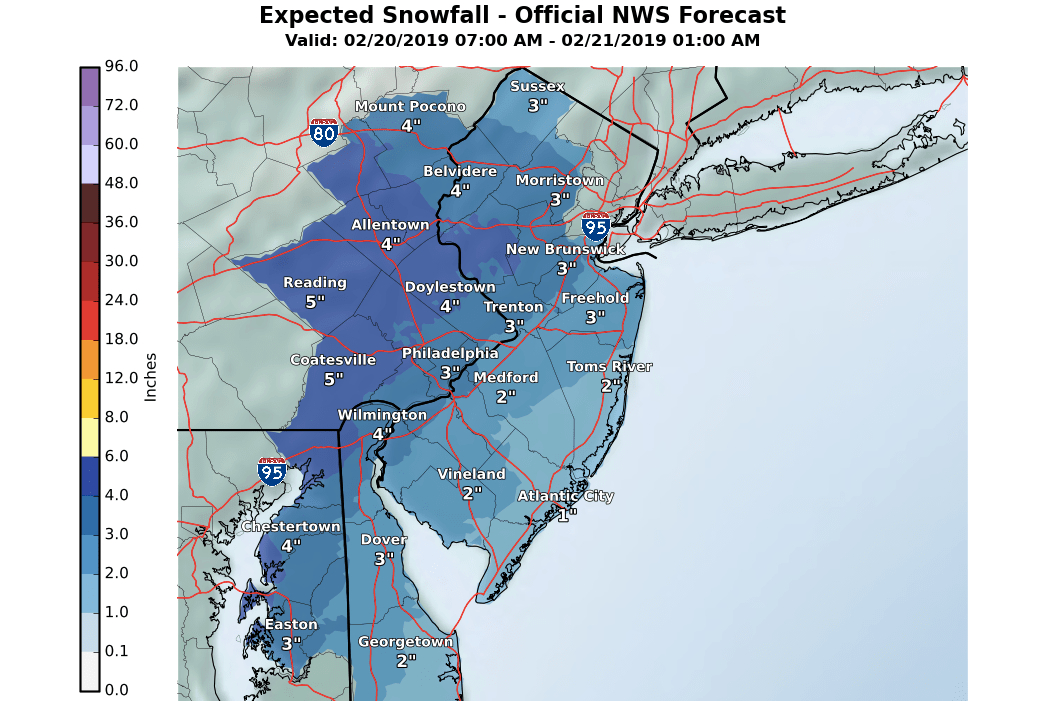 Another week, another potential winter storm — and this one looks like it will actually bring some snow.

Forecasters say the Philly region will likely get 2 to 4 inches of snow on Wednesday. They’re warning of potentially hazardous road conditions, likely at their worst during the evening commute.

As a result, both the School District of Philadelphia and the Archdiocese of Philadelphia have cancelled classes on Wednesday. (For a list of other local school closures and delays, visit 6ABC.)

Due to the forecasted inclement weather, all School District of Philadelphia schools will be closed Wednesday, Feb. 20, 2019. The District will announce the decision regarding the status of administrative offices by 5 a.m. on Wednesday. pic.twitter.com/EeBaI5x3wp

Here’s the deal with the forecast: According to NWS, snow is expected to begin mid- to late-morning (sometime after 8 a.m.), so the morning commute will likely be spared. We’ll probably see mixed precipitation by mid-afternoon (think: sleet and freezing rain), forecasters say. The wintry mix will switch to rain by the evening, probably around 8 p.m.

All in all, expect to see 2 to 4 inches of snow in and near Philadelphia, as mentioned, as well as a potential glazing of ice. The precipitation could make for slippery roads on Wednesday, especially during the evening commute.

We’re in for straight rain on Thursday, when the high is expected to reach a balmy 56 (!) degrees Fahrenheit. The erratic weather makes us think the snowstorm will coincide suspiciously well with February’s “super snow moon,” which peaked on Tuesday morning.

Either way, we could be in for a doozy on Wednesday, after a few recent “winter storm” flops. 6ABC meteorologist Adam Joseph compared the details of the impending snowstorm to that hellish mess of ice and slush we saw back in November.