What We Know About the Winter Storms (Yes, Storms) Headed Our Way
Subscribe
Follow
I'm a scraper
This search result is here to prevent scraping

What We Know About the Winter Storms Headed Our Way

Snow — and “dangerous wind chills” — are almost upon us. Here’s the latest revised forecast. 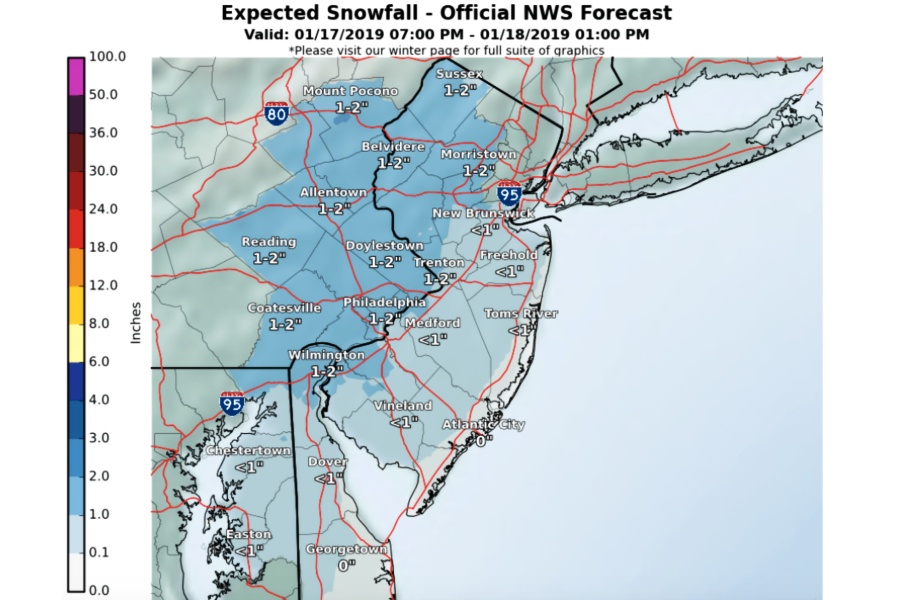 Forecasters say we’re in for not one but two snow events later this week and weekend. Here’s what we know so far.

The first winter storm — the weaker of the two — is expected to hit on Thursday. According to the National Weather Service, we’re in for some snow Thursday night, which will likely change to rain early Friday morning and end by midday. (That means the water could wash away the snow … or it means we could be in for a really messy Friday morning commute — remember the hellish, slushy mess that took us by surprise in November?)

Right now, forecasters are predicting snow amounts to be in the 1-2-inch range along and west of I-95, with the Lehigh Valley, northwestern Jersey and the Poconos expected to see the most snow accumulation. In Philly, we’ll probably only get an inch, but 2 inches is possible, according to current forecasts. In the meantime, keep your eyes peeled for a possible Winter Weather Advisory later this week. (As of Thursday morning, we were under a hazardous weather outlook.)

The “big action” begins on Saturday, according to the NWS — though the organization says the “details including precipitation types and impacts” regarding the winter storm remain uncertain. Still, they’re gearing up for what could be a significant weather event.

Forecasters are warning of a potential “mess of wintry precipitation” for the region — though our area is more likely to see a change from snow to rain throughout the storm. Either way, snow amounts in the region could be significant (like 6-10 inches northwest of us), they say, as well as icing and the potential for heavy rain and mixed precipitation. That’s expected to cause “several days of dangerous cold, large icy patches on roads” — even where precipitation is all rain. No word yet on exact snowfall amounts, though we’ll likely have a better picture on Thursday evening.

We’re also in for a “flash freeze” on Sunday afternoon, which could lower temperatures to the teens and 20s, and Monday is expected to be quite windy. In fact, the NWS is warning of “dangerous wind chills Sunday night through Tuesday.”

So yeah, it’s going to be a messy week/weekend, and apparently Mother Nature wants to remind us that we’re deep in the clutches of winter, despite what’s been a relatively mild season so far.

Still, there’s plenty of time for the NWS to make changes to the forecast. We’ll keep you posted.