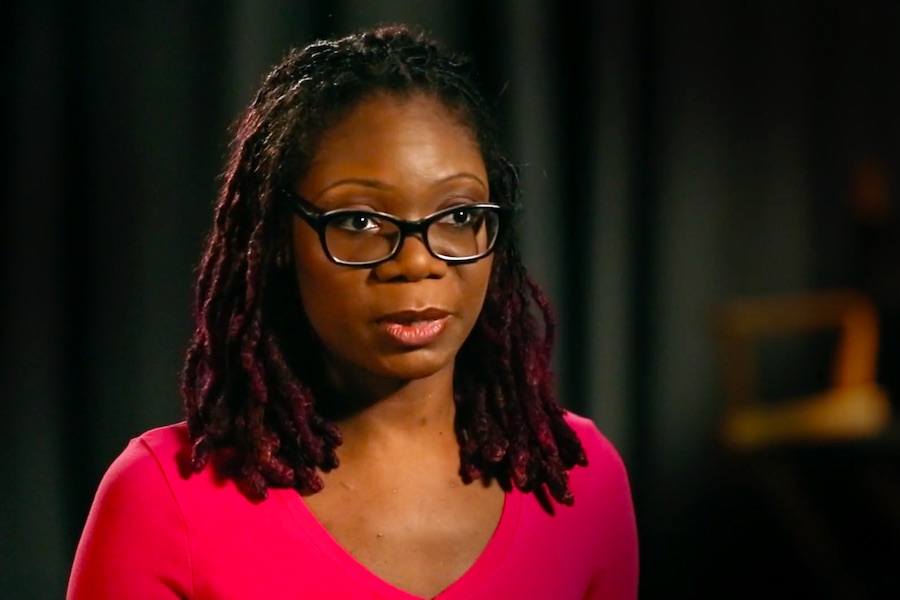 This week, the fascinating documentary Horror Noire premieres on Shudder, the streaming service from AMC Network. Horror Noire, which this Forbes review calls a “must-see deep dive,” explores the history of black people in horror movies — their exploitation, tokenization, and degradation, just for starters — from the earliest days of cinema through Get Out, the triumphant 2017 film from Jordan Peele, who takes part in the documentary.

We caught up with West Philadelphia’s own Ashlee Blackwell, a 36-year-old horror movie expert and founder of the scholarly website Graveyard Shift Sisters (“Purging the black female horror fan from the margins”) to learn more. In addition to appearing in Horror Noire, Blackwell is a co-writer and co-producer of the documentary.

At what point in your life did you discover a love for horror movies?
I’ve loved horror for as long as I can remember. I think I was five years old when Beetlejuice first hit VHS, and I’ve loved horror ever since then. And of course there was Michael Jackson’s “Thriller” video. Growing up, I was this weird black girl who liked horror, and I felt very isolated. I didn’t fit the mold of the young black female.

And when did it dawn on you that there were issues surrounding the way that black people were presented in horror movies?
I grew up in the ’80s, and so for me, it was about not seeing characters that looked like me on screen. But I didn’t really notice or think about it that much. Then I went to Temple and took black cinema courses, and I learned about minstrelsy and blackface and that the lack of representation of black people. But really, it wasn’t until I got the book Horror Noire in 2013 that I specifically saw and understood the treatment of black people in horror. I was able to see how films were filming blackness as something to be feared.

What brought you to start Graveyard Shift Sisters?
In 2013, I was really absorbing what was out there on the Internet, and it was a lot of white guys talking about the male characters in horror movies. They would talk about slasher films and break down meticulously the characters, but nobody would ever talk about the black women in these films.

This idea of the black guy always dying first in horror movies — is that basically true?
It is a thing. It’s obviously not always true. But the discussion around that frustrates me. I feel like it’s losing the point of the issue. I don’t care if we die first. I care about whether our characters are well-fleshed out. I care about whether we die as heroes. We’re always the characters sacrificing our lives for a white character or we’re the spooks or we get so little time on screen. That’s what I care about.

One thing I’ve always wondered: In the book The Shining, the black character at the hotel lives. In the movie, he dies a horribly violent death. Any thoughts on why Stanley Kubrick would have made that choice?
I don’t know, but it is perplexing. It’s kind of like what they did with the new It movie. In the book It, there’s a very nuanced black character who serves as the town’s historian. He is important. In the new movie, he is tokenized and there only for some read-between-the-lines subtextual racial tension. It’s really frustrating that we’re doing things like that in a movie that just came out two years ago.

What horror movie franchises are the biggest offenders?
That’s a rough one. It’s such a mixed bag. On one hand, you have a Nightmare on Elm Street movie with the sassy angry black character. But then in Nightmare on Elm Street 4, you have a nerdy black girl who is just herself. She’s not fitting some mold of what a young black girl is supposed to be.

And then I’ve always been surprised that the Halloween movies haven’t had more black characters, but then, you are in mostly white suburbia. And, of course, then you have Busta Rhymes in Halloween: Resurrection, and he was truly terrible in it — but so much fun to watch.

How about some suggestions for essential black horror movies that we should add to our queue?
Ganja & Hess, from 1973. Son of Ingagi, from 1940. The Blood of Jesus. And then Blacula, Sugar Hill, Scream Blacula Scream, Dr. Black & Mr. Hyde. And Tales from the Hood is probably the pinnacle of black horror.

Not Get Out?
I loved Get Out.

Speaking of Get Out, in your documentary, you show that over the years, time and time again, the industry has taken steps forward — the breakthrough performance of Duane Jones in 1968’s Night of the Living Dead, for example — only to then take two steps back shortly thereafter — blaxploitation in the 1970s. Do you feel like with Get Out that we finally “get it”?
I don’t know. I use the word “hope” a lot. I hope that these independent filmmakers get the kind of access and opportunities that Jordan Peele got. I hope that the people who have the money give it to talented black creators who want to make horror movies.

Any new movies in the pipeline that you are particularly excited about?
Absolutely. Sweetheart by J.D. Dillard. Little Monsters. And, of course, Jordan Peele’s Us.