And it was more exciting than the Super Bowl itself. 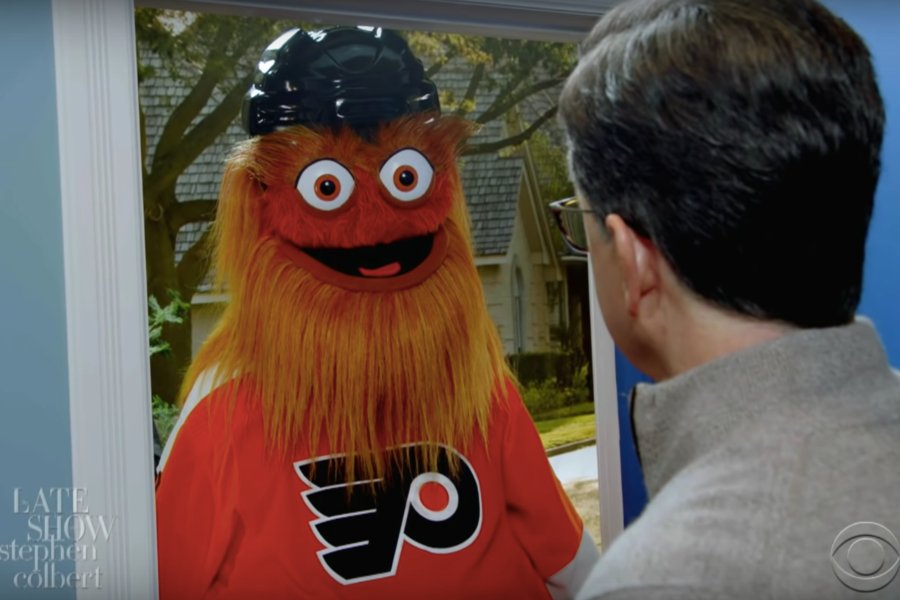 Now that most boring Super Bowl in history has passed, we can focus our attention on what really matters: Gritty.

Our beloved mascot graced Stephen Colbert’s Super Bowl party on Sunday night. Footage of their shindig aired shortly after most Philadelphians rolled their eyes and turned off their TVs — but it was better than the Super Bowl itself, naturally.

Gritty showed up at Colbert’s party as a guest of Sir Patrick Stewart, a.k.a. Jean-Luc Picard from Star Trek (because apparently Gritty and Stewart hang out). The thing is, Stewart arrived at the party before Gritty, which made for an awkward (and priceless) entrance: Gritty showed up alone, and Colbert, looking terrified, tried slowly shutting the door on his face. (It was sort of like when the Flyers first introduced Gritty to the world, and the world wasn’t ready yet.)

But Gritty made his way inside the party anyway. And throughout the course of the segment, we learned several new things about him, like that he used to dabble in the theater — he once played Juliet Capulet in “Romeo and Juliet.” (You’re surprised? Look at those luscious locks.) Oh, and apparently he sometimes goes by “Gritwald,” but only when he’s borrowing Stewarts’s transporter so he can beam Colbert to his show on time.

Related: How the Flyers’ Social Media Geniuses Made the World Love Gritty

At one point during the party, House Speaker Nancy Pelosi and Senate Minority Leader Chuck Schumer showed up — briefly. They never made it through the door. Standing outside, Pelosi cracked a few jokes, Schumer called the duo “the party leaders,” and then they hobbled off, podium in tow.

It’s a bizarre gathering — not the most exciting of those that Gritty has crashed (let’s not forget the occasions when he’s showed up to dance with unsuspecting brides on their wedding days). But we’d watch it over Sunday night’s Super Bowl any day.