The book — P is for Pterodactyl — is a New York Times best seller. 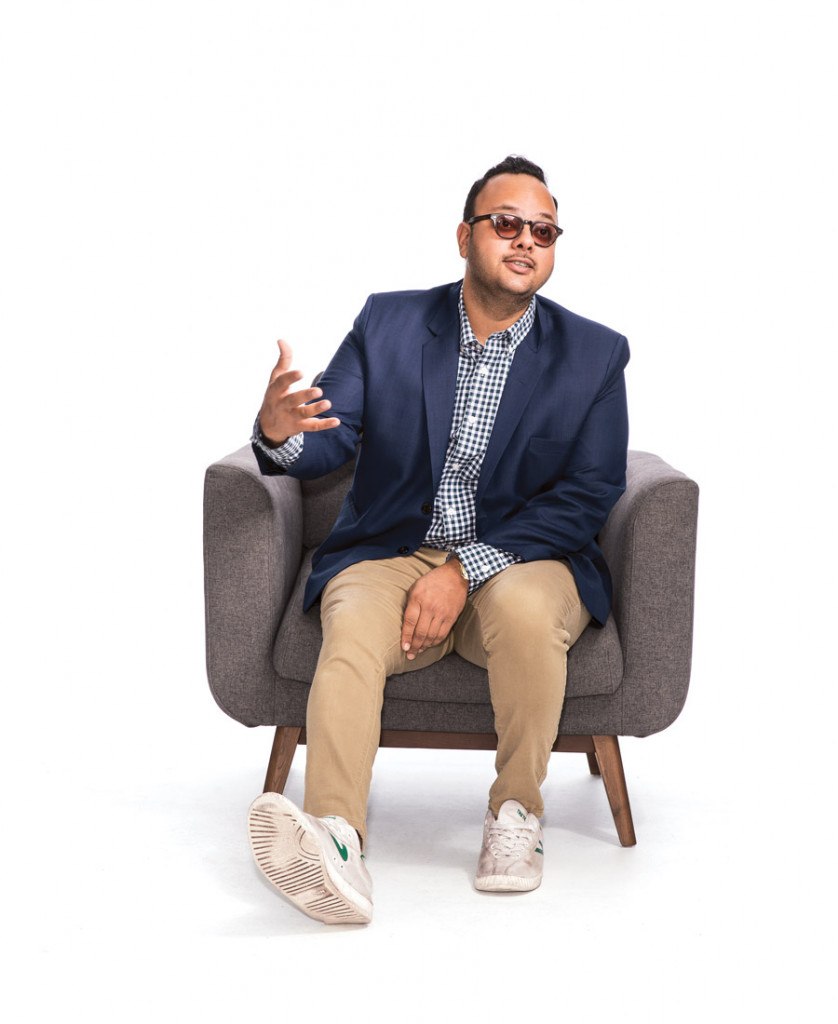 Philly rapper Raj Haldar is the co-author of P is for Pterodactyl. Photograph by Colin Lenton.

You’re an underground rapper with a best-selling children’s book. This is what you expected, right?
Ha. It’s literally what nobody expected. The publisher probably least of all.

Do you feel like an author?
It takes a little psychological adjustment. From the time I was 20 years old, when I look in the mirror — I’m a musician. Now, as I push into other media, that’s shifting a little. I think the baseline of all this is that I like to make shit. Whether it’s records or a children’s book, I like to create.

As of press time, your publisher was printing 200,000 more copies.
Not to open the kimono too much, but that’s definitely more than my records have sold.

P is for Pterodactyl is all about words that don’t sound like they look — aisle, czar, quinoa. Have you heard of the movement to reinvent English so every word is spelled like it sounds?
Oh my God, it’s ridiculous. I don’t think in language and art and the like that an Occam’s-razor outlook always makes sense. Things exist in weird ways because people are weird. I don’t think that should always change.

I’m sure you’ve seen the Amazon commenter complaining that you included the word “Ouija,” calling it an occult reference.
Seeing that review was, in a way, music to my ears. I don’t want anybody to be returning the book, but listen, we got to push the envelope where we can here.

This isn’t your first foray into kid stuff. You also make science rap videos for Nick Jr. Since your records are known for fast and wordy rhymes, is rapping for kids like putting on a restrictor plate?
From a pure artistic standpoint, doing the Nick Jr. songs has been a great exercise in learning how to communicate more simply and effectively. My rap stuff, by design, is full of my thoughts at a mile-per-minute pace, and that’s an aesthetic choice, of course, but with these Nick Jr. things, I have to boil concepts down to a very simple, empirical kind of thing.

If there’s a common thread between your book and your Nick Jr. videos, maybe it’s that kids deserve a little more credit.
Before the book found a publisher, there were a handful of rejections, and one of the common themes was, “Oh, this is too complex of a concept for kids.” I think, ultimately, the proof is in the pudding. When we do readings, kids already know words like “pterodactyl.” I’m finding that kids love to tangle with unwieldy, crazy, kooky words. I think there is too much content out there that doesn’t value the fact that kids are as voracious as shit. That’s, like, innate and natural, and I’m happy to feed that.

What’s it like deejaying at Eagles home games?
Last year was an incredible moment. Just getting to feel that electricity from preseason game one all the way through the Super Bowl — you could feel this energy that wasn’t there before.

You’ve lived in London and NYC. What does Philly offer you?
I will forever be indebted to the City of Philadelphia. From the moment I got here in ’06, I just knew this was a city that was going to allow me to live and breathe and grow as an artist. I heard somebody say the other day, “It’s like 80 percent of New York for 20 percent of the cost.” Which rings true on some level.

Published as “Word Nerd” in the February 2019 issue of Philadelphia magazine.