Watch an Olympic Medalist Fall Many, Many Times Trying to Snowboard the Rocky Steps

Sebastien Toutant became the first snowboarder ever to descend a railing down the iconic stairs — after a few attempts. 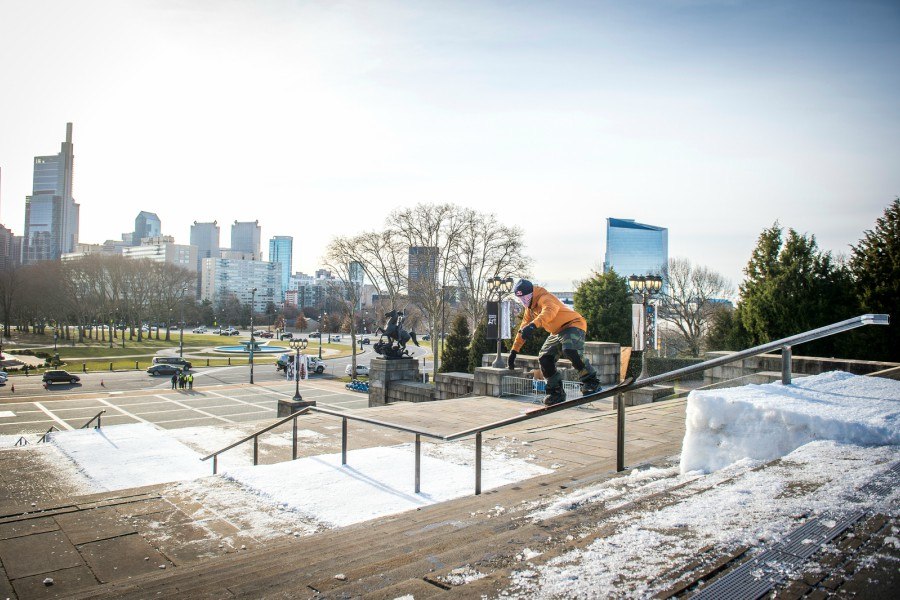 Olympian Sebastien Toutant just became the first person to snowboard down a railing on the Rocky Steps. | Photo by Aaron Blatt via Red Bull

Update: We knew it looked too easy! After we published this story on Monday, we found videos of Olympic gold medalist Sebastien Toutant (known as Seb Toots) trying and failing to snowboard along a railing down the Art Museum Steps. Apparently the trick took many attempts — and some Rocky-style training. We’ve included two additional videos below.

We glorify Rocky for running up the Art Museum steps — but apparently going down the stairs is just as impressive.

Canadian Olympic gold medalist Sebastien Toutant has become the first person ever to descend a railing down the so-called “Rocky Steps.”

Toutant, who’s 26 years old and from a suburb of Montreal, is the reigning Olympic champion in the men’s big air snowboarding event and twice a gold medal winner at the X Games (in 2011 and 2013). He also has an incredible nickname: Seb Toots.

After his gold-medal run at the 2018 Winter Olympics, Toots apparently sought a new challenge — specifically one involving stairs. One of his sponsors, Red Bull, wanted to help him in his quest. According to the company, Toots “searched far and wide for an iconic stair set and landed in Philadelphia on the Art Museum Steps that he saw in movies as a kid.”

Flash forward to January 7th: Red Bull transforms the Rocky Steps into a sort of snow terrain park, building a custom two-part, 145-foot kinked rail, with more than 20 tons of snow. After a few attempts (and some Rocky-style training), Toots conquers the trick — the largest kinked rail side on the East Coast, apparently.

We don’t disagree — Rocky would be proud. Next time you’re in Philly, Toots, pretzels and cheesesteaks are on us.

Oh, and this gives us some ideas, now that it’s sledding season …

Watch an Olympic Medalist Fall Many, Many Times Trying to Snowboard the Rocky Steps