21 Places to Escape the Tyranny of Modern Technology in Philly 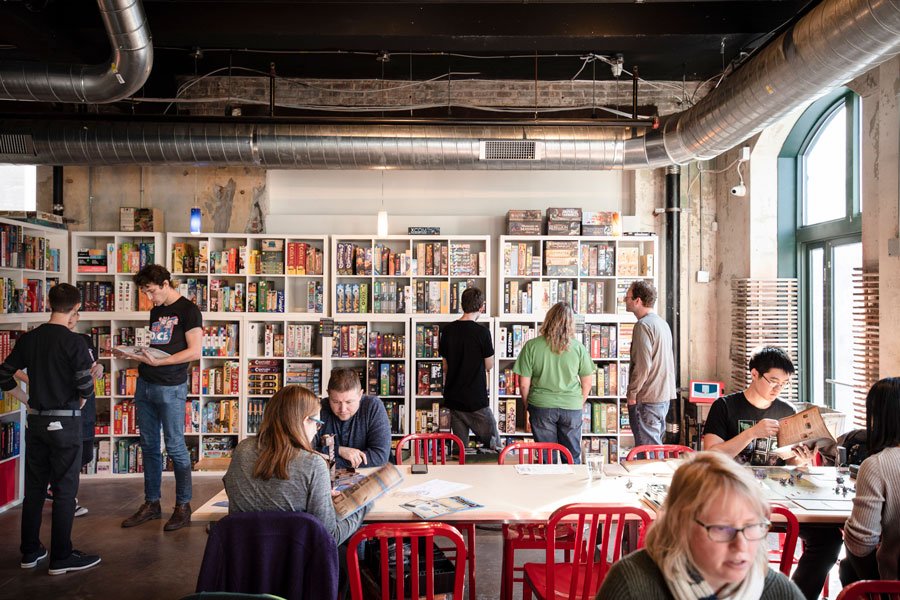 Thirsty Dice in Fairmount is packed with board games — and a perfect place to begin your digital detox. Photograph by Edwin Williams Photography

From typewriter stores to connection-free coffee shops, here’s your guide to 21 Philly places where you can live like it’s 1979.

Fergie’s Pub
Fergie’s opened its doors in 1994 with nary a TV screen — and nearly a quarter of a century later, it still doesn’t have any. So, nope, you can’t watch the game, the fight, or the finale of anything — but you can enjoy a beer and an actual conversation. 1214 Sansom Street, Midtown Village, 215-928-8118.

Thirsty Dice
With more than 800 games on hand and “game tenders” standing by to make recommendations and explain rules, Fairmount’s new game cafe calls to mind a time when just the thought of blowing up imaginary enemies on a handheld screen would seem as deranged as it really is. Bonus: plenty of comfort food, cocktails and craft beer. 1642 Fairmount Avenue, Fairmount, 215-765-2679.

Scrabble Club at the Lansdowne Library
Scrabble was invented in the 1940s, and Philly devotees soon launched players’ clubs all over the region. At the Lansdowne library, groups meet on Tuesdays at 5 p.m., and the suggested 1940s-era fee of $2 gets donated to the library. 55 South Lansdowne Avenue, Lansdowne, 610-623-0239.

La Colombe
Todd Carmichael’s coffee powerhouse is known for all sorts of innovations, but one piece of modernity it doesn’t embrace is wi-fi in its cafes. (At least, in most of them; the company bent its own policy by offering wireless connectivity at some Chicago locations.) Enjoy a latte, a conversation with the person next to you, or — gasp — maybe even a book. Various locations.

Brave New Worlds
On a recent weekday afternoon, it was hard to tell who was more jazzed about the shelves of comic books at the Old City outpost of Brave New Worlds — the middle-aged men poring over Marvel first editions or the grade-schoolers ogling the new Star Wars series. 433 West Moreland Road, Willow Grove, 215-657-8838, and 55 North 2nd Street, Old City, 215-925-6525.

Newtown Hardware House
This classic purveyor of everything from tools to toys opened in 1869, before humanity had witnessed a world war or a Home Depot. Even if you’re not a DIY-er, stop in for the store’s legendary homemade chocolate chip cookies, the ultimate American throwback. 108 South State Street, Newtown, 215-968-3611.

Hidden River Yarns
Sure, you can just pop in to buy a skein of yarn — but you may want to bring your needles and plan to stay a while on the comfy couch of Lisa Kathryn Johnson’s sweet space, which feels more like a friend’s living room than a storefront and is stocked with gorgeous yarns that have been almost entirely sourced, spun and dyed in the U.S. HYR also hosts weekly knitting groups and offers classes throughout the year; call for schedules. 4358 B Main Street, Manayunk, 215-920-2603.

Franklin Maps
Born as Franklin Survey Company in 1928 (and incorporating Philly map company J.L. Smith, which started in Philly in the 19th century), Franklin Maps is one of the few places where you can buy a gorgeous current or antique map or have one custom-made and framed. Call to make an appointment before you trek out to KOP. 333 South Henderson Road, King of Prussia, 610-265-6277.

PucciManuli
Quality + craftsmanship = the guiding philosophy at this chic toy boutique, where nothing requires batteries, many of the wares are handmade in Europe, and original toy innovations are celebrated. 2 East Lancaster Avenue, Ardmore, 610-649-2909.

Riverbend Environmental Education Center
If getting your kids out of the basement is a battle, pack into the minivan for a trip to Riverbend, where they can explore the meadow, stream, pond and forest as well as the indoor aquaponics greenhouse. Open 365 days a year, dawn till dusk. 1950 Spring Mill Road, Gladwyne, 610-527-5234, riverbendeec.org.

The Waldorf School
This Germantown-based pre-K-through-eighth-grade school goes against the cultural grain, not only eschewing computers in the classroom but discouraging students from watching TV or using home computers during the school week. 6000 Wayne Avenue, Germantown, 215-248-1662.

Puzzle So Hard
At this year-old start-up, founder Jen Hope partners with artists worldwide — including muralist Farid Rueda and string artist Danielle Clough — to convert their work to 1,000-piece puzzles and package it in boxes that rival the most gorgeous coffee-table tomes. Get them at Thirsty Dice (see: Board Games); otherwise, you have to go through the company’s website to order them. (We’ll allow the violation.)

Philly Typewriter
This 2018 Best of Philly winner recently launched its groovy Philadelphia Public Typewriter Program: For $150, spend three to four workshop sessions at the store learning how to take apart, repair and restore old typewriters that will then be put on display in public places for passersby to use — and fall in love with. Co-owner Bryan Kravitz, who’s been repairing typewriters since 1975, has committed to placing the machines in 2,000 spots around the region by the end of 2020. 1439 East Passyunk Avenue, East Passyunk, 267-541-2100.

The Last Word
Is a used-book store even a used-book store if there’s no haughty cat strutting the crowded aisles? You’ll find regal Lester skulking through the maze of tomes neatly shelved and piled around this Penn standby, which stocks everything from The Baby-Sitters Club to the Quran. 220 South 40th Street, University City, 215-386-7750.

Mr. Steve
Philly native Steve “Mr. Steve” Ferrell has been deejaying around town — Bob & Barbara’s Lounge, Johnny Brenda’s, North Bowl and South Bowl — since 2002, and in that time, he’s only ever spun records. “You can really feel things from a record, more so than on a digital platform,” he says. “It’s almost magical.” Ready to start your own collection? Some of Ferrell’s favorites: Philadelphia Record Exchange on Frankford Avenue, Long in the Tooth Records on Sansom Street, Brewerytown Beats on West Girard Avenue, and Molly’s Books and Records on South 9th Street.

Published as “The Luddite List” in the January 2019 issue of Philadelphia magazine.