Yes, there are two Women’s Marches being held in Philly on Saturday — but they’re not exactly separate. Details on that and more. 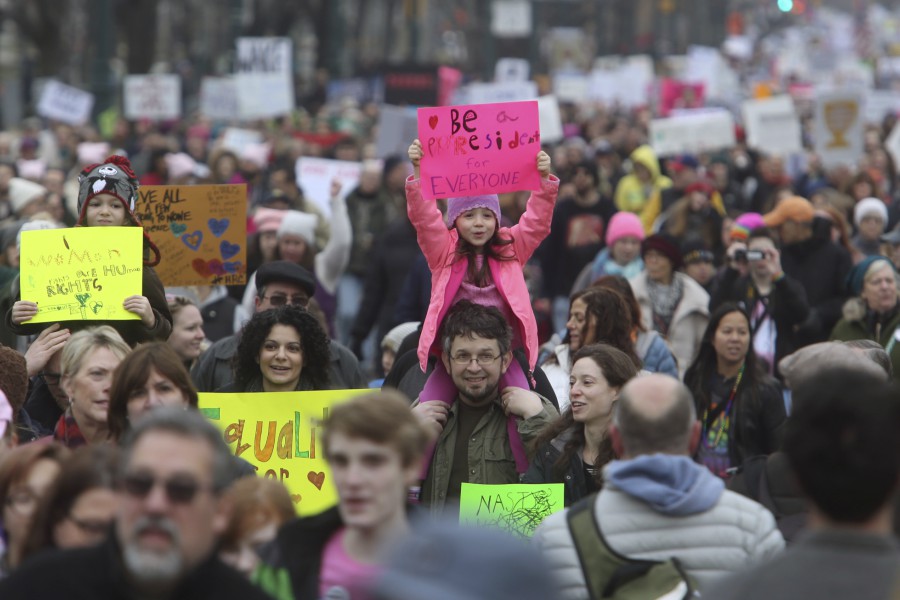 A young girl holds a protest sign as she participates in a Women’s March Philadelphia on Saturday Jan. 21, 2017. (AP Photo/Jacqueline Larma)

It feels hard to believe, but this weekend, we’re in for the third annual Women’s March since President Donald Trump‘s inauguration.

The demonstration is expected to take over the Benjamin Franklin Parkway yet again — pending a few factors. The first, and most important, is the weather: We’re in for a messy winter storm on Saturday. (More details on that below.) The second is that there are actually two Women’s Marches planned this year, in slightly different locations. While they’ll both take place on the Benjamin Franklin Parkway, one will wrap up on the east apron of the Philadelphia Museum of Art, as it has in the past, and the other will conclude near LOVE Park and JFK Plaza. We’re not really sure what to expect the regarding crowd size of either march. (More on that below, also.)

But there are other, more typical logistics to worry about — like road closures, for example. Here’s what you need to know about the 2019 Women’s March in Philadelphia.

There’s a significant winter storm brewing, and it’s expected to hit the area on Saturday. Forecasters are calling for snow on Saturday afternoon, with some accumulation possible (likely an inch, if that), before a change to a wintery mix of snow, sleet, and freezing rain on Saturday night. If you plan to attend the march, your best bet is probably to go early (like, as close to 10 a.m. as possible), before the worst of it. Be sure to check with the National Weather Service for the latest forecast.

Philly Women Rally, which is unaffiliated with the organization behind the national Women’s March, will start their march at Logan Square, then head to Eakins Oval, where they’ll host speakers. The group has held Philly’s version of the Women’s March for the past three years.

Women’s March Pennsylvania is connected to the national Women’s March. They’ll host a rally at LOVE Park all day, with speakers including former president of the Philadelphia chapter of the National Organization for Women (and lieutenant governor candidate) Nina Ahmad.

The marches aren’t exactly separate or competing: Both organizers told Philly.com that they would welcome an organic merge. We recommend checking out the Facebook pages for the events (linked above) to decide which march is up your alley.

Delays are expected throughout the course of the marches, which are expected to start at 10 a.m. and conclude around 3 p.m. Motorists are advised to avoid the areas if possible, as well as allow for extra driving time and refrain from double-parking, which creates congestion.

Per the city, the following streets will be closed between 5 a.m. and 5 p.m. on Saturday:

Cross traffic on the Benjamin Franklin Parkway will be permitted on the following numbered streets:

The following streets will be no-parking zones between 5 a.m. and 5 p.m. on Saturday:

The Philadelphia Museum of Art and other Parkway museums will remain open on Saturday.

Starting at 5 a.m. Saturday, inbound (eastbound) traffic on Kelly Drive must exit Kelly Drive at Fairmount Avenue. To access the west side of the Philadelphia Museum of Art, continue to 25th Street and turn right on Anne d’Harnoncourt Drive. To access the Barnes Foundation, follow Fairmount Avenue to Pennsylvania Avenue, turn right on 21st Street, and make the first left onto Callowhill Street. To access the Franklin Institute, use the main entrance on 20th Street. The parking garage can be accessed by traveling eastbound on Winter Street from either 22nd Street or the I-676 off-ramp. Vehicles will be directed to turn right at 21st and Winter Streets, and the garage entrance is on 21st Street on the left.