This Drexel Grad Helped the Boyd Theater Get Its Glass Back 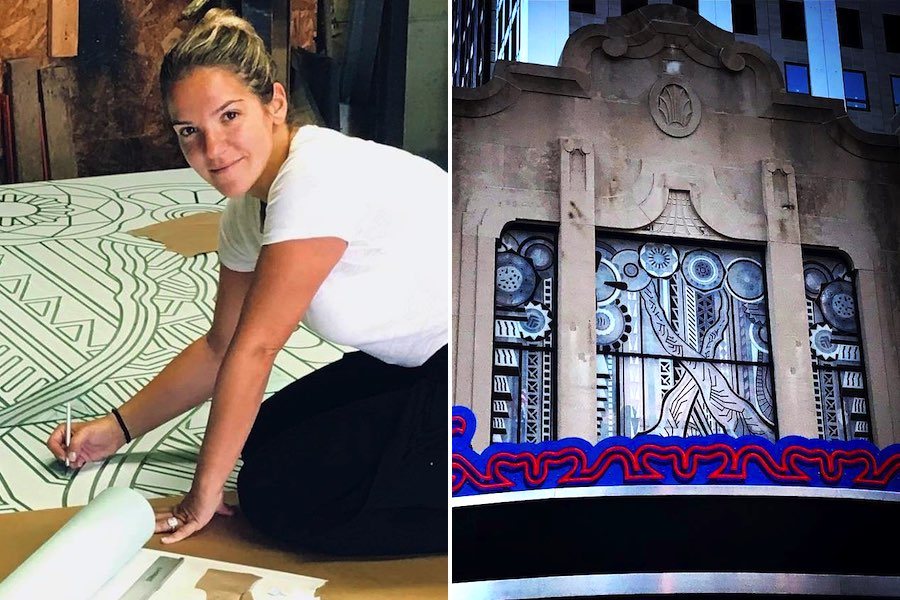 Left: Christina Sioutis at work on the glass panels for the Boyd building in Center City. Right: The completed glass pieces in place.

If you take a walk down Chestnut Street these days and look up when you get to the corner of 19th Street, you’ll notice that the old Boyd Theater building — yes, the one that’s in the middle of some very controversial development — has a new addition: the Art Deco glass on the façade has been restored.

It’s the work of 30-year-old Delco native Christina Sioutis, who never planned on becoming a glass artist. Sioutis majored in design and merchandising at Drexel, and she moved to New York to work for a Manhattan-based fashion design company after graduation.

But one day about eight years ago, Sioutis’s dad called her and said that a woman he knew was selling a small glass-etching business. Sioutis didn’t know anything about the craft, but she was bored in New York, so she decided to work with the woman to learn the ropes. And soon, Sioutis bought the woman’s equipment and opened her own one-woman shop: Ammos Glass.

“Ammos in Greek means sand,” Sioutis explains. “And I use sand — sandblasting — to create the glass pieces.” 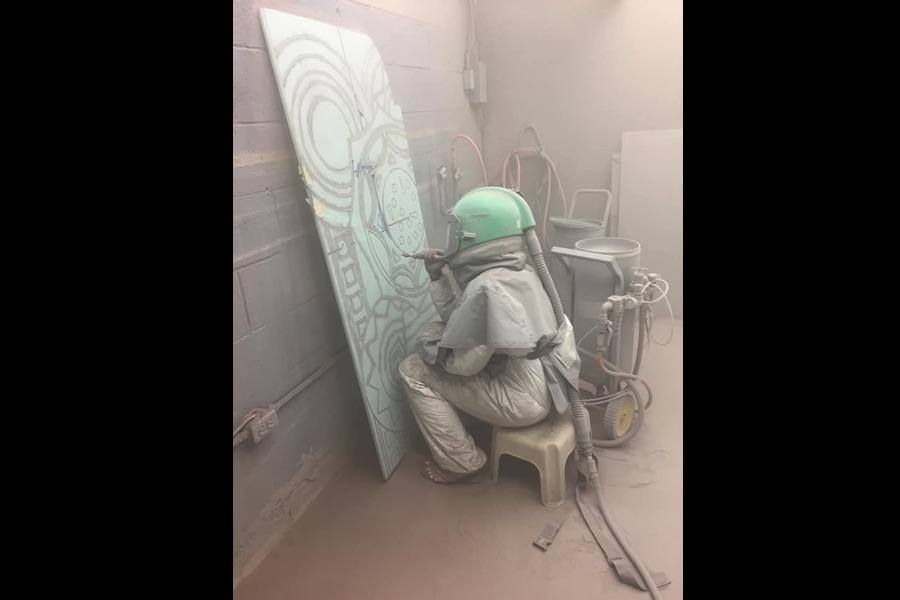 Martians making art? No. It’s just Christina Sioutis sandblasting one of the glass panels that decorate the façade of the old Boyd building on Chestnut Street.

Over the years, Sioutis has done glass etching for the University of Pennsylvania, Children’s Hospital of Philadelphia, Comcast, and Brandywine Realty Trust. She’s also the person responsible for the glasswork at Old City’s now-iconic Franklin Fountain ice cream parlor.

“When I got the call for the Boyd, I was super-psyched,” she says. “I walked through to see all the incredible work they did 100 years ago. That glass was originally carved 100 years ago. Imagine how they used to have to do it back then.”

To work up the design, Sioutis studied the existing glass pieces that were removed from the Boyd — most of the original panels were broken or missing entirely — as well as a couple of grainy historical photos.

Then she sandblasted new glass pieces — some 12 feet long and weighing hundreds of pounds — in her workshop in Upper Darby. She realized that to get the right shades of glass for some of the elements, she needed to do a type of sandblasting that she had never done before.

“I searched and searched and found an 89-year-old guy in Texas who knew how to do it,” Sioutis tells Philly Mag. “So I flew down there and said, ‘Teach me everything you know.’ This is truly a dying art.”

Once her work was done, Rittenhouse Square artist Perry Milou, a friend of her husband’s, painted some of the panels. The black details are his, but the rest of the shading comes from different depths of sandblasting completed by Sioutis. (Ignore the garish red and blue marquee details in front of the glass panels; Sioutis had nothing to do with that and says that it’s temporary.)

Sioutis says that business is good, but explains that most companies today choose a much simpler and cheaper option when they want a design on glass: they just use a vinyl sticker that gives a similar appearance.