Here are all the ways Eagles fans are embracing the term after Sunday’s unforgettable game. 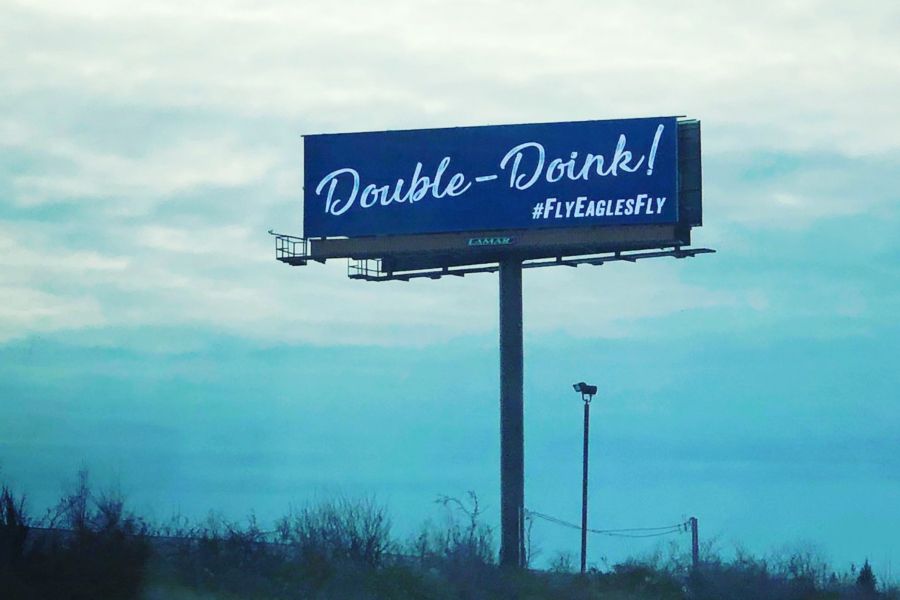 That didn’t take long: A double doink-themed billboard popped up in South Jersey on Monday. | Photo by @sferrari12 via Twitter

Eagles fans will forever joyfully recall January 6th, 2019, the day that Eagles defensive tackle Treyvon Hester tipped a field goal attempt by Chicago Bears kicker Cody Parkey, damning the ball’s trajectory and setting in motion its “doink, doink” off the field goal posts to secure a win for the Birds.

Yes, 2019 is the year of the Double Doink. The Philly Special, which is so 2018, must now move over. Because while the dazzling, all-important and unforgettable Super Bowl play will go down in history, Double Doink is of the moment, and Philly is wasting no time cashing in with Double Doink–themed T-shirts, food deals, and even a billboard.

The buzz prompts us to recall last February, when city businesses launched a plethora of “Philly Special” food and drink specials, and fans drank from fancy Bud Light glasses etched with the Super Bowl play. Because that’s how we do things here — when our Birds break free from their underdog status, we relive the moment over and over and over and over again, until there’s a new one. And in case you need any proof, here are all the places you’ll find the phrase right now.

1. On a billboard in South Jersey

Yep, that was fast. CBS3 reports that you’ll find a Double Doink billboard on Route 295 in South Jersey, near exit 45. According to the news organization, the tribute is owned by Lamar Advertising Agency, which also showcases Nick Foles–themed billboards throughout the Philly area.

There’s already a billboard on 295 in Jersey. pic.twitter.com/bglYxR08W1

BreakingT might have been the first apparel company to launch Double Doink T-shirts, which went on sale Monday and cost $25. It’s worth noting that the company’s Philly Special tees are currently on sale for $15.

3. In the Philly skyline

That’s right. The PECO building is now showing an animation of the blocked kick. If you’re feeling down this week, just look to the sky for a little cheering up.

The double-doink in bright lights high above the city of Philadelphia.

That's right, the PECO Building is showing an animation of the famous blocked kick. pic.twitter.com/UiicTFvhYA

The burger chain is running a Philly-only deal this week (it ends on Sunday, when the Eagles play the New Orleans Saints), according to PhillyVoice. If you order through the Shake Shack app and use the code “doinkdoink” at checkout, you can get $3 off your order. (The field goal would’ve been worth three points, had Parkey made it.)

In celebration of the Eagles win and missed field goals, all Philly @shakeshack tomorrow will be offering 3 dollars off app orders with the App code: doinkdoink. The promo will be running until the next Eagles game on 1/13. https://t.co/oNr4B02qZG
#FlyEaglesFly

Our favorite mascot (sorry, Swoop) trolled Parkey on Tuesday by riffing on the movie Bird Box, in which Sandra Bullock’s character and others wear blindfolds (yes, that’s where the memes and the so-called “Bird Box Challenge” are coming from).

WARNING: Do not attempt the Parkey challenge in Chicago!

Bonus: Coming soon … a Double Doink bar near you?

Because temporary drink and food specials aren’t enough, pizza master Joe Beddia (the man behind Fishtown’s now-closed Beddia, of course) suggested opening a bar called the Double Doink. It’s an idea we — and everyone else, apparently — can get behind.

Should we open a bar in Philly called the Double Doink?

It’ll be a sandwich served with two yellow toothpicks… one on each side, and the left one will have a football stuck to it!