A visit to the theater of justice. 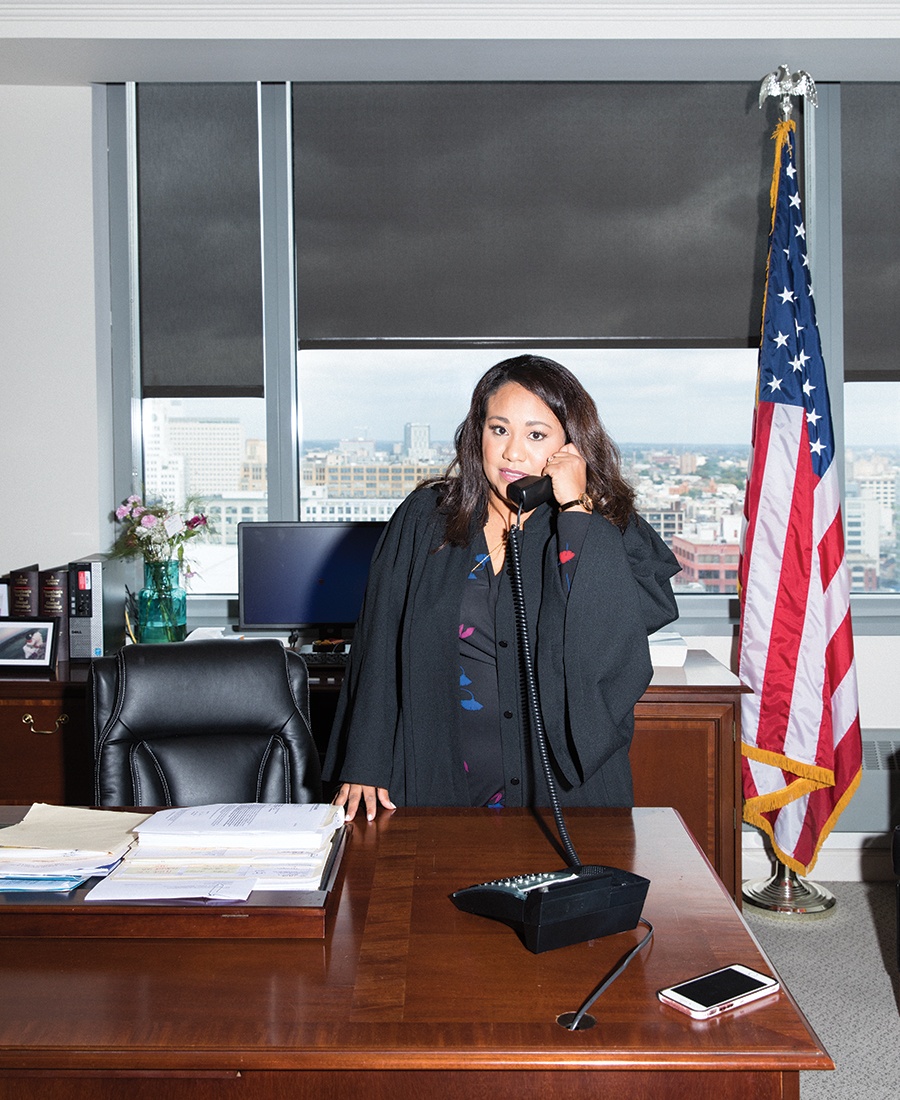 It hasn’t even been a week since Mia Roberts-Perez’s 37th birthday, and she’s presiding over a man’s fate. In her Common Pleas courtroom on the seventh floor of the Juanita Kidd Stout courthouse at 13th and Filbert, Roberts-Perez’s long black hair flows over the collar of her long black robe as she sits in a big black chair. On the right side of the room are the defendant and his counsel, with a dozen friends and family arrayed as backup. On the left side is the assistant district attorney and, behind her, the girl the defendant is accused of raping and sexually molesting for four years, starting when she was a child. Sitting beside her is her mom, the defendant’s ex-girlfriend. Arrayed against the wall, in numbered chairs, are 14 rapt jurors, dead silent as the lead defense lawyer makes his closing argument. It’s Shakespeare and Nabokov and Tolstoy all rolled into one in the courtroom today.

The city’s court system is a vast, creaky, labyrinthine structure. Most of us, unless we get stuck with jury duty, will never visit anything but its traffic outposts, or perhaps catch a City Hall wedding. For thousands of Philadelphians, though, their encounters will be the most significant experiences they ever undergo. Their freedom, their futures, their families, their lives, all hang in Roberts-Perez’s scales. Yet for her, it’s just Friday, and one of some 400 trials she’ll preside over in the Criminal Division this year.

From my seat in a long pew, I can only see the young woman who’s alleged to be the victim from the side. She wears a dangling pearl earring, and her hair is covered in a black cloth that forms a long, pointed snood. She looks like Vermeer’s Girl With a Pearl Earring from this angle, in the surprisingly becoming light.

This is a courtroom of women today. Besides Her Honor and the ADA, Roberts-Perez’s law clerk, stenographer, secretary and court crier are all female; they’re gracious and smiling as they usher the jurors in and out through a door, remind visitors to turn off their cell phones, flit back and forth across the carpeted floor. Whatever chaos lurks beneath the surface of the lives of those involved, under Roberts-Perez’s gaze there is only decorum as this morality play unspools.

“I know this has been a difficult trial to hear,” the defense attorney tells the jury. “This is a matter of highest importance.” It’s a case, he tells them, that rests solely on the testimony of the girl: “It’s a story, not rooted in fact, not corroborated by others. For you to convict, the government has the burden to show you that the story was fact, was corroborated, was consistent. … ” The world outside the courtroom today is buzzing with news of Christine Blasey Ford, the professor who has just claimed that U.S. Supreme Court nominee Brett Kavanaugh sexually assaulted her when she was about the same age as the girl with the earring. That attack, too, is uncorroborated by witnesses. “This story has never been told the same way twice,” the defense attorney reminds the jurors, who sit forward in their chairs.

Everybody has a story, Judge Roberts-Perez tells me in her robing room. What goes on in her courtroom can be “theatrical,” she says, and where there’s an audience, it’s human nature to play to it. That’s why she’ll often summon attorneys here, backstage, for discussions in private. She also warns me that she can’t talk to me about her current case or anything that’s political in nature — and you can see this last part pains her, because Roberts-Perez clearly isn’t the type to not have opinions. That’s the hardest part of this job she ran for and won at the precocious age of 34: “There are a lot of conversations I can’t engage in. I have to say no to dinner-party invitations if I think attorneys will be there who could show up in my courtroom. You’re always balancing the ethical portion of the job with just trying to be a person. We’re aware of that all the time.”

Here’s her story: grew up in Germantown, two younger brothers, wrote a book report on Thurgood Marshall when she was in fifth grade. Went to Tufts because she fell in love with it, then to Temple Law, where she’s now an adjunct. She used to be a criminal attorney. Before that, she did municipal work in Montgomery County. “I’m not a natural politician,” she says. She doesn’t care for making small talk; she doesn’t like crowds. “My family wasn’t a political dynasty,” she says of her decision to run for the bench. “I had very few connections. I just went around and talked about my background, my experience.” Any capital she had, she thinks, came from constituents recognizing that she knows human nature: “That’s what people want, isn’t it? Someone who’ll listen and be fair?”

Back in court, it’s the prosecution’s turn to sum the case up. The ADA is fiery and blunt as she addresses the jurors: “I’m not asking you to like her,” she says of the mother of the alleged victim. “I’m not asking you to sympathize with her. She chose to be in a tumultuous relationship with a man who beat her, drank, didn’t support the family. But when she found out what her boyfriend had done to her daughter, she did the right thing.”

She moves to a whiteboard to jot down six key points she wants to make for the jurors about determining truth: Details, Demeanor, Corroboration, Motive … But the cover of the whiteboard keeps banging shut; one of the aides helps her prop it open with a tripod. And now the markers for the whiteboard are failing; she gets no further than the C … O in Corroboration before they give out. This is a Philadelphia courtroom. Not everything will work perfectly.

The ADA plunges on, unfazed. “The defense argued that when something traumatic happens, it sticks in your mind. But if your story changes, it doesn’t mean you’re lying. You’re just remembering it differently.” She jabs a finger in the air. “This wasn’t trauma for her. By now, this was familiar. This was routine. She already knew what was going to happen when he took her downstairs to that living room.”

The judge thinks that working as a criminal attorney — one of very few women in an overwhelmingly male field, she mentions — trained her to size up situations, calibrate the level of her response to what’s happening in her courtroom. She handles a sudden vehement objection from the defense attorney with unruffled aplomb. She recognizes the irony that she’s already run for and won public office despite being a member of a generation that’s notoriously averse to voting. “It’s a matter of deciding whether you feel you’re going to be heard,” she says, excusing her peers. “Millennials are figuring out their way, which is different from the way of the boomers or the Greatest Generation. They’re figuring out whether government is the most efficient way to effect change.” That she’s been in a rush to get to where she is doesn’t make her impatient with others’ more measured pace: “We all have our own journey. There are sacrifices I’ve made to be here at this age. My journey is not for everybody.”

Once the prosecutor concludes her closing argument, Roberts-Perez instructs the jurors in a loud, clear voice about each facet of the charges the defendant is facing. At first I think she’s too loud, overmic’d; then I realize the volume is intentional, to command the attention of these ordinary citizens called on to do the everyday, extraordinary work of deciding innocence or guilt. You’d never guess, from the judge’s calm, self-assured voice, that her feet are dangling; she’s too short for her big black chair.

“He has an absolute right to remain silent,” Roberts-Perez tells the jurors regarding the defendant. “He is presumed to be innocent. … ‘Deviate’ is a legal word that should not be confused with ‘deviant,’ which has a negative connotation. … You are to decide the facts of this case based on life and how you have experienced it.”

The jurors — an even dozen plus two alternates — are diverse as all get-out: four black men, four white men, three black women, two white women, one Asian man. “Did you see my jury?” Roberts-Perez asks proudly in her chambers. “That’s my jury every week. I don’t have to sit there and worry about the diversity of the jury. It is the strength and the beauty of this city. You get a little bit of everything. The bench has to reflect that: where we grew up, where we are economically, the experiences we have.” Everybody has a story, right? “Everyone does! We’re shaped by so many things in our lives — opportunity, lack of opportunity, trauma we’ve experienced. We’re not all afforded the same things.” That recognition drove her, just a few years into her career, to run for a judgeship; the city’s Latino community was woefully underrepresented on the bench. “The potential climate and opportunity were there,” she says. “Do I seize it now, or wait?” She’s already told me: This millennial doesn’t like standing in line.

So here she sits, loving her job, she says, “absolutely,” even though it entails bearing witness to so much unhappiness. “I deal with people who are alleged to do horrendous things — things they don’t even put on TV shows,” she says, just before returning to the courtroom where two Philadelphia families wait to learn what justice means for them.

Published as “Dropping In: Holding Court” in the December 2018 issue of Philadelphia magazine.