Two Philly lawmakers say that businesses that refuse to accept cash are discriminating against certain communities. 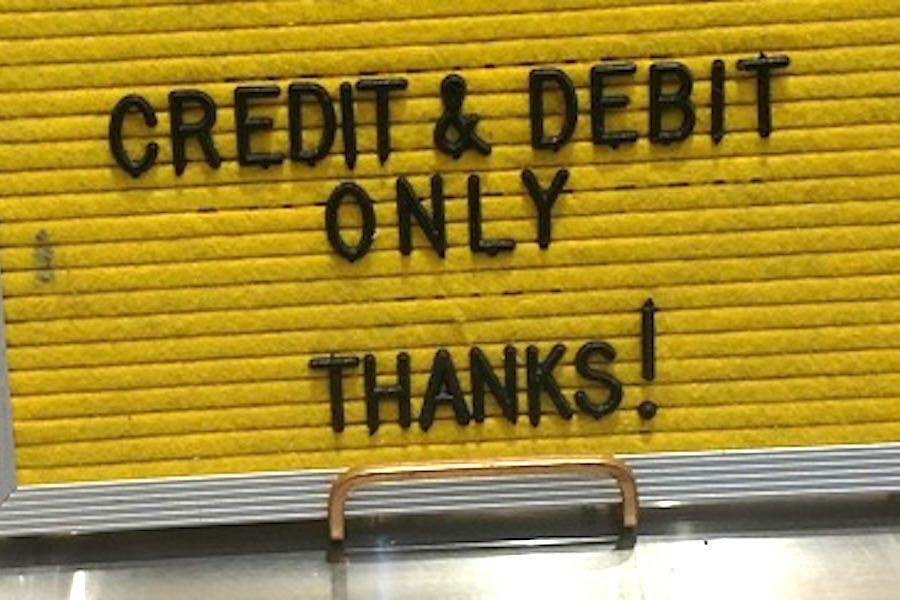 No Cash Here: A sign at Goldie Falafel at the University of Pennsylvania’s food court. (Photo by Ernest Owens)

“This note is legal tender for all debts, public and private.” That’s what is written on every single piece of United States paper currency that’s in circulation, but a growing number of businesses are refusing to accept cash. And Philadelphia Councilman-at-Large Bill Greenlee wants to put a stop to that.

Greenlee has introduced a bill that would require businesses in Philadelphia to allow customers to use cash to pay for goods or services. The bill would amend the city’s Fair Practices Ordinance, which provides protections against unlawful discrimination.

“I started hearing about it from a few people,” Greenlee says, referring to the trend in cashless businesses. “And I thought that something just doesn’t sound right. To me, it’s discriminatory.”

As Greenlee sees it, there are a lot of communities where cash is still king, and the refusal to accept cash discriminates against lower-income customers who might not have credit cards.

“So I can’t get a salad or a sandwich because I don’t have a credit or debit card?” Greenlee asks.

Well, that’s true at some places in Philadelphia, but they seem to be few and far between.

There’s no master list of businesses in the city that don’t accept cash. Greenlee’s office pointed to Bluestone Cafe near City Hall and a blowout bar at 17th and Market. We found some cashless spots at the University of Pennsylvania’s food court, and the chain Sweetgreen won’t take your bills either.

Earlier this year, Bluestone CEO Nick Stone told NPR that 90 percent of his customers never, ever paid in cash anyway. And he pointed out that service is a lot quicker when cashiers don’t have to make change.

Stone pegged the average ordering and paying process at about 40 seconds for people paying electronically. The average time for a cash-paying customer? About 50 percent longer. Anybody who has been in the grocery store checkout line behind the little old lady with her change purse can attest to this.

But is it really discrimination to turn down cash?

Greenlee insists it is, and so does the bill’s co-sponsor, Councilwoman Maria Quiñones-Sánchez, whose district includes much of North Philadelphia.

“Many Philadelphia families rely on cash for daily needs,” Quiñones-Sánchez said in a statement. “While we continue working to expand access to financial institutions for all Philadelphians, no doors should be closed to them.”

One thing’s for sure: Statistics show that cash-free retail is on the rise nationally. And companies like Visa couldn’t be happier about it. Last year, Visa announced the Visa Challenge, in which 50 businesses were offered $10,000 each to go cashless.

“We are declaring war on cash,” a Visa publicist told the Associated Press.

As anybody who lives in the city knows, there are a lot of businesses in Philadelphia that only accept cash, their argument usually being that it’s too expensive to take cards due to the fees that businesses are charged by the credit card companies. (Notably, most of these cash-only businesses seem to have an ATM in the corner that will charge you $3 to take out the money you need to pay at the cash-only business.)

But Visa claims that it’s actually more expensive overall for businesses to operate with cash. The company recently released a report — and, again, let’s keep in mind that this report was commissioned by Visa — that shows that average cost of digital payments is 57 percent less than with cash, due to problems like theft, counterfeiting, fraud, and the amount of time it takes to count money and get it to the bank.

“I’m not against automation,” insists Greenlee. “But sometimes people go too far with it.”

Ed. Note: This story was updated to exclude Honeygrow from the list of area businesses that do not accept cash. Honeygrow was originally provided on a list to us by Councilman-at-Large Greenlee’s office.