After Pittsburgh Shooting, Prayer — and Tighter Security — at Philly Synagogues

In the wake of the Tree of Life massacre, the rabbi of North Philly’s Congregation Rodeph Shalom said the synagogue is “reevaluating” its defense measures. 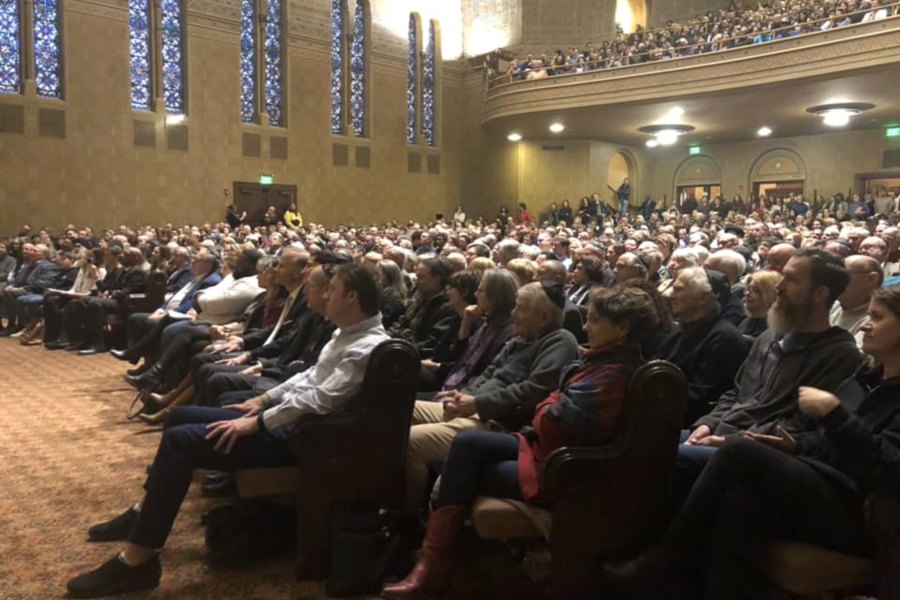 On Saturday morning in Squirrel Hill, Pittsburgh, 46-year-old Robert Bowers entered the Tree of Life Synagogue and shot and killed 11 worshippers and injured six others, including four police officers. A criminal complaint filed in the case says that as Bowers surrendered to police, he said he had “wanted all Jews to die” and that Jews were “committing genocide against his people.” The incident is being investigated as a hate crime.

The horrifying massacre reverberated across a nation all too prone to mass shootings, and one in which 2017 saw the highest recorded single-year increase in anti-Semitic incidents (including vandalism, harassment or assault), according to the Anti-Defamation League. That includes a 182 percent spike in anti-Semitic incidents during the month after the white nationalist rally and riots in Charlottesville, Virginia, in August 2017.

In Philadelphia, the response to the Tree of Life massacre has been notably strong. Local congregations are uniting in the wake of the mass shooting — and enlisting tighter security measures.

On Saturday evening, hundreds of people gathered in the rain in Rittenhouse Square to denounce the violence and mourn the lives lost. Writer Jennifer Weiner and state Rep. Jared Solomon were among those in attendance.

At Philadelphia vigil. Standing in solidarity with the Jewish community of Pittsburgh. May the memories of the dead be a blessing.

On Sunday, Congregation Rodeph Shalom — near Broad and Mount Vernon streets in North Philadelphia — held a vigil in support of those affected by the shooting at Tree of Life Synagogue. Roughy 1,500 people attended the event organized with the Jewish Federation of Greater Philadelphia.

“There’s been a lot of fear and anxiety and insecurity around it,” Maderer said. “The Jewish community is really one large family, so it feels like it’s hitting very close to home.”

“At the same time, I don’t feel shocked,” Maderer added. “There’s been more of a license for bigotry, especially in the last couple years. We need to continue to be there for other communities when they’re targeted, whether its the Muslim community, or the LGBTQ community, or the African-American community — there’s so much demonization of the other.”

Maderer said that the synagogue is “reevaluating” its security measures in the wake of the Pittsburgh shooting. The congregation already employs several unarmed security guards for its daily services, as well as police officers for large-scale events.

Asked whether the synagogue would consider arming its officers, Maderer said the organization is “considering all options.”

“We are trying to learn more all the time to reflect on best practices and try the balance between security and wanting to be open and welcoming and not creating a police state,” she said.

Meanwhile, the Philadelphia Police Department said it was taking precautions to prevent such an incident. In a tweet on Saturday, the department said it had deployed officers to synagogues and “houses of worship” across the city.

“We are not aware of any current threats to Philadelphia — but as always — encourage folks to dial 911 with any suspicious information,” the PPD said.

As we continue to monitor the situation in Pittsburgh, we are sending officers to Synagogues and other houses of worship across the city. We are not aware of any current threats to Philadelphia – but as always – encourage folks to dial 911 with any suspicious information.

“Although it seems, from all indications so far, that this was a one-off incident, that doesn’t mean that there won’t be copycats,” Burstein said.

The Anti-Defamation League offers a “Guide to Protecting Your Religious or Communal Institution” on its website. The manual aims to “share security best practices with other religious and communal institutions,” according to its introduction. Burstein encourages not only synagogues, but also churches and mosques and other religious organizations to look it over.

The Anti-Defamation League spoke at a variety of local vigils regarding the massacre this weekend, including at Congregation Beth Or in Montgomery County, as well as at synagogues in Delaware and New Jersey. Both Burstein and Maderer said they found the community support reassuring.

“There were vigils across the entire community, and they didn’t include just Jewish people,” Burstein said. “If you look out among the crowd, at the diversity of the crowd — all faiths, all colors, all ages — it was a real testament to our community,” Burstein said.

“The way that the community has stood up for its Jewish neighbors have been overwhelming, including law enforcement speaking out, elected officials speaking out, community leaders speaking out — together, that is what it’s going to take to exorcise prejudice from this country,” she added.

When a white supremacist shot nine Black Americans at their church for simply being Black, @powerinterfaith rabbis, imams, and other leaders called @markkellytyler to say “We are all AME.” Last night, Dr. Tyler said, “We are all Jewish.” #TreeOfLifeSynagogue pic.twitter.com/gYKh498rxM