The Satanic Temple to Perform a Black Mass In Philly Tonight

Naturally, some people are pretty freaked out about this. 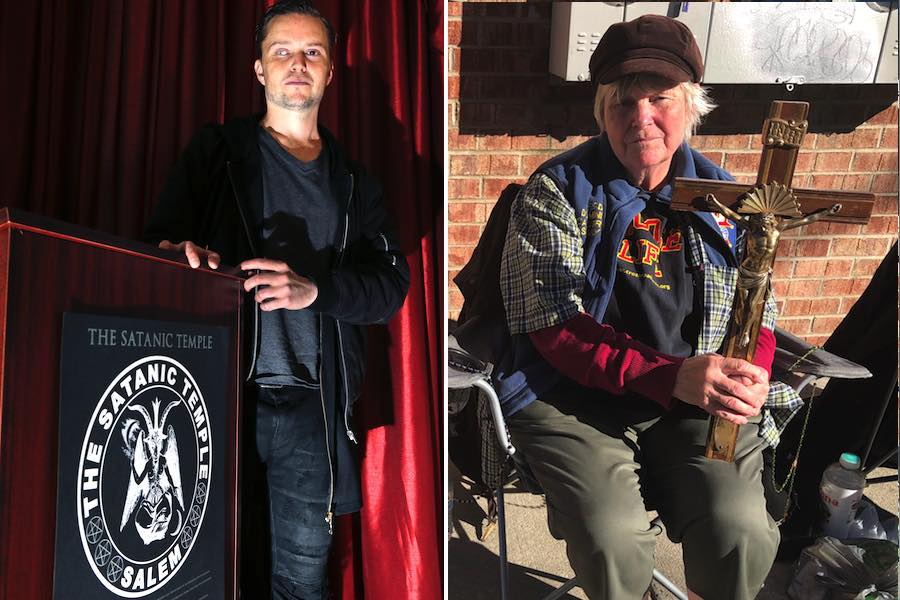 New Jersey resident Joan Bell has been camped out in front of 12th and Spring Garden arts venue PhilaMOCA since 6 p.m. on Thursday. She has a three-foot-tall statue of the Virgin Mary. And she has her rosaries. She’s there to prayerfully protest the appearance of the Satanic Temple at PhilaMOCA on Friday night.

“Judging by the event in April, I expect a lot of heavy metal people, a lot of New Age-type and Wiccan-type people,” predicts Bresler. “There is a community here with a real interest in the occult, but there is no real place for them in Philadelphia.”

Details are a little sketchy on what exactly the black mass ritual will entail, but the mass will undoubtedly make a mockery of traditional religious masses. Bresler, who saw a rehearsal, mentioned a Catholic priest being whipped and then giving birth on stage. But Satanic Temple co-founder Lucien Greaves was less forthcoming with precise details.

“A black mass should’t be static or rote,” explains Greaves. “Black masses change throughout times. If you’re challenging established norms, you have to adjust your blasphemy to suit the times. This one has a Philadelphia feel to it. The scripting was motivated by the recent revelations surrounding the Catholic child abuse scandal. There will be some things that some people might consider a bit of depravity, but they are between consenting stage participants.”

Bell plans to remain in vigil outside of PhilaMOCA for a total of 33 hours.

“Jesus lived for 33 years on this earth, and we want to get 33 hours, one hour for every year he lived,” she says. “Praying for reparation for the hate crime against our savior that is going on in there. We’re praying for those involved, that God will bless them and bring them out of this darkness.”

Bresler says he’s received about 40 letters and emails asking him to call off the black mass. And he expects more protestors this evening. He says that while he never hires security for events unless the performers request it, he’s being proactive for the Satanic Temple’s black mass ritual. “I hired two security guards,” he tells Philly Mag. “Just in case.”

We asked Greaves how he felt about people being upset over him bringing the black mass to Philadelphia.

“It’s not about them,” he says. “What we’re doing is not meant to be a calculated insult. This is for us and for the participants. A lot of people come from Judeo-Christian culture and they’re trying to shake free of cultural programming. They embrace blasphemy to shake themselves free.”

Coincidentally, Friday was the same day that the HVAC contractors showed up with a brand new air conditioning system for PhilaMOCA.

“Yes,” says Bresler. “We get a new air conditioner just in time for the Satanists to show up.”

With reporting by Laura Smythe.