Here’s hoping they do a better job than Alex Trebek. 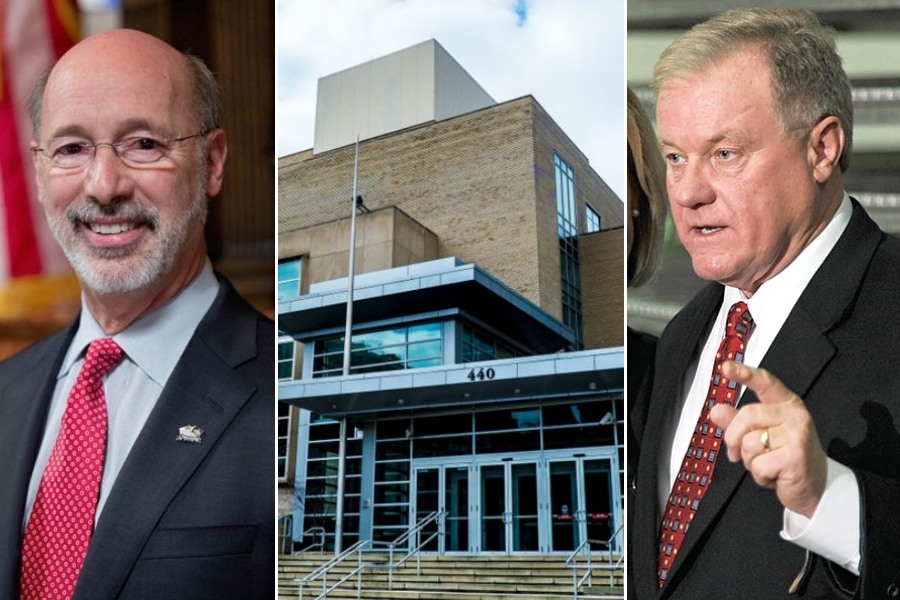 Tom Wolf (L) and Scott Wagner will participate in a student forum organized by the Rendell Center on Wednesday.

It’s been roughly a week since Gov. Tom Wolf and Scott Wagner participated in the first — and only — debate of the 2018 gubernatorial race, which was moderated (as you likely know by now) by Jeopardy! host Alex Trebek and deemed a disaster by political reporters and the rest of the internet.

Now the candidates are preparing for another session of grilling — but this time, the people asking the questions will be fifth- and sixth-grade students. From Philly.

On Wednesday morning, the Rendell Center for Civics and Civic Engagement will host its 2018 Gubernatorial Forum, during which five students from schools in the city, the surrounding suburbs and Pittsburgh will present a series of questions to Wolf and Wagner. Both candidates will answer the same five queries, chosen by the Rendell Center.

The candidates won’t appear on stage at the same time, but the forum is probably the closest thing to a gubernatorial debate that we’ll get ahead of November, seeing as Wolf’s campaign only agreed to one brawl. Either way, we’re expecting the students to do a better job than Trebek.

We called former Gov. Ed Rendell and Philadelphia School District superintendent William R. Hite to get the scoop on the student forum, which will be held in the auditorium of the school district building at 440 North Broad Street (and live-streamed at philasd.org/live). Here’s what they had to say.

How’d the idea for the student forum come to be?
Rendell: We decided to focus on elementary kids, because a lot of [civic engagement] efforts are focused on high schools. We have tried this before — in 2015, we had a mayoral debate. It was a good exchange of ideas, and it was telecasted to virtually every school in the district, including to upper schools as well. This year, with the governor’s election, we thought we’d do it again, and fortunately Sen. Wagner and Gov. Wolf agreed. There’s no back-and-forth. There’s a coin-tosser, one candidate goes first, he leaves, and then the other comes in, and he answers the exact same questions. There are five questions and five minutes each to answer. It’s like a forum. The reason we did it this way is because, as you probably know, Gov. Wolf has only agreed to one debate. 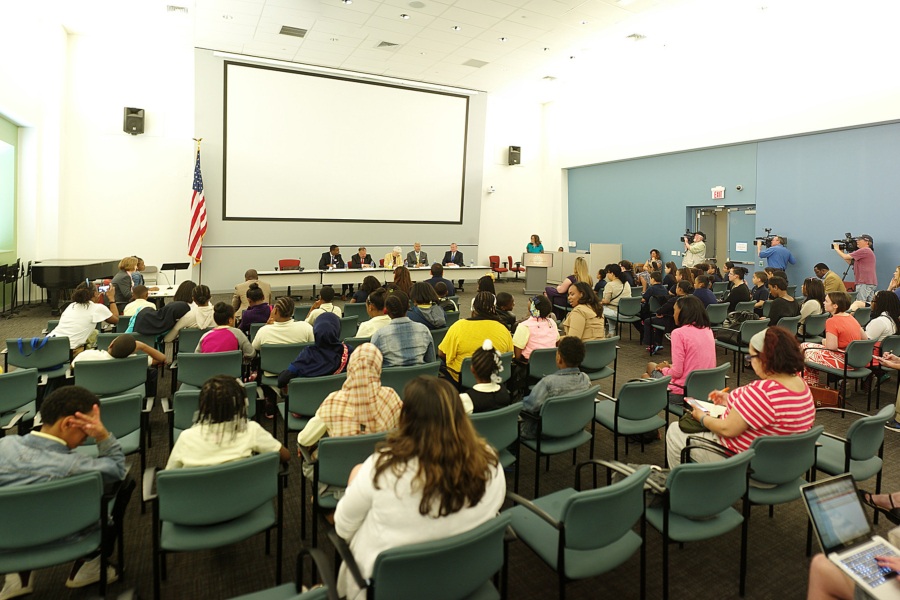 The 2015 mayoral debate. | Photo courtesy of The Rendell Center

Did you originally envision this as a debate?
Rendell: In 2015, we did [a debate] with the six Democratic mayoral candidates. But this will work just as well, because we’re really focusing on the questions and the answers, not any back-and-forth sniping.

I’m guessing you’re hoping the kids will do a better job than Alex Trebek.
Rendell: Oh yeah, the kids will be better. They won’t be talking about themselves.

What kind of questions can we expect from the students?
Rendell: The questions deal almost exclusively with education. There was one question about homelessness. We got a lot of submissions about air conditioning — I think because of the heat wave that we got in the beginning of the school year. 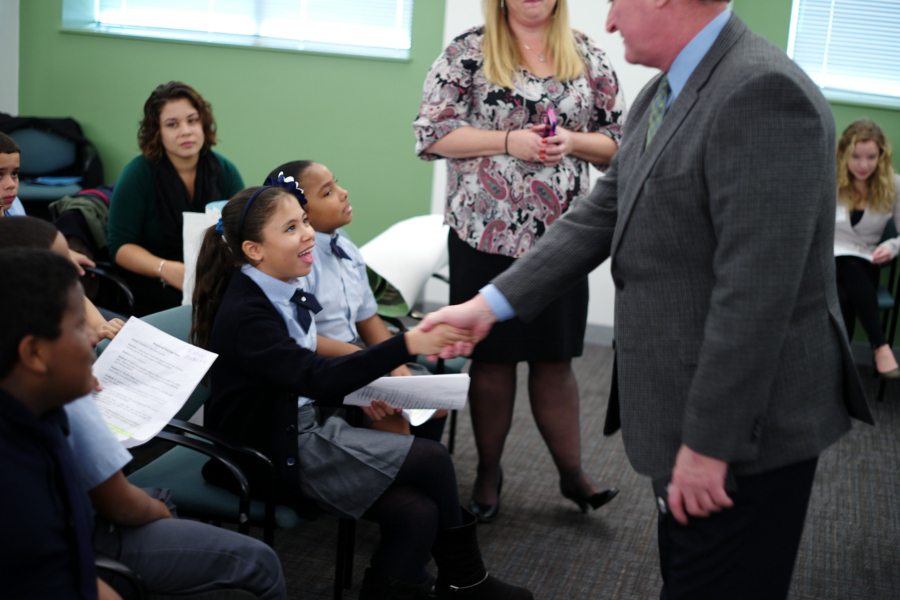 Any particular questions that impressed you most?
Hite: I actually was impressed with the homelessness question. It’s from the true voice of youth who have seen [homelessness] in and around their communities and, as a result, are asking a question about it. I believe that these children are thinking beyond just what they need and thinking more broadly about what they see beyond their communities, and it’s exactly why their voices should be included in opportunities like these. My second favorite question was about the distribution of [state] funding for schools — that doesn’t come as a shock to anyone. But it’s interesting, that student [who asked about state funding distribution] is from Lower Merion.

Is there a sort of overarching goal of the student forum?
Rendell: The overarching goal fits in with the other things we do at the Rendell Center: It’s to get elementary school kids to figure out what the government means to them, thinking about voting, thinking about how democracy works — to become better citizens and better candidates themselves. You should feel the level of excitement that exists for the kids, getting a chance to ask the governor a question.

Have you spoken to any students about the forum? What are they saying?
Hite: I haven’t spoken to any children directly about [the forum]. With the mayoral debate [in 2015] … what was exciting to watch was the fourth- through sixth-graders who were all so excited about these issues. While they don’t vote and they are not registered yet, they are very interested. They ask the principals about it. It’s important for our young people to have this opportunity, because we’re trying to increase the level of engagement that children are having with politics, and as the governor indicated, there’s a lot of excitement when children are doing a mock trial. That type of interaction with young people and engagement with young people help them better understand how their government works.

Rendell: One of the things that we’ve heard from the teachers is that the kids go home and tell their parents, and it gets their parents excited about issues. You have to see it to appreciate how seriously they take it — how adult they get and how excited they get to be a part of it. 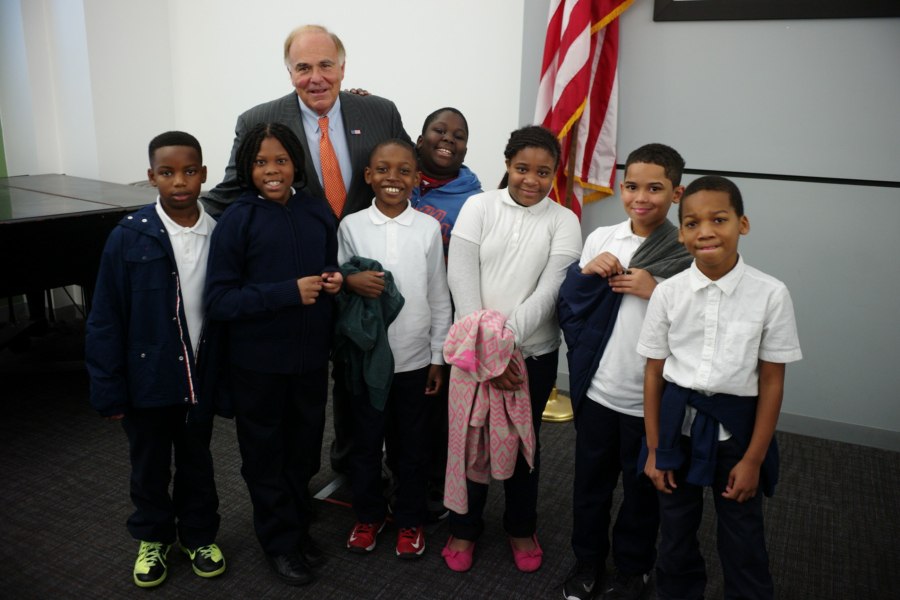 Gov. Rendell with students. | Photo courtesy of The Rendell Center.