“W. Wilson Goode, Sr. Way” Is Another Rizzo Statue in the Making

How could City Council not see that by honoring the man who approved the MOVE bombing, they are erecting another permanent reminder of a tainted mayoral legacy? 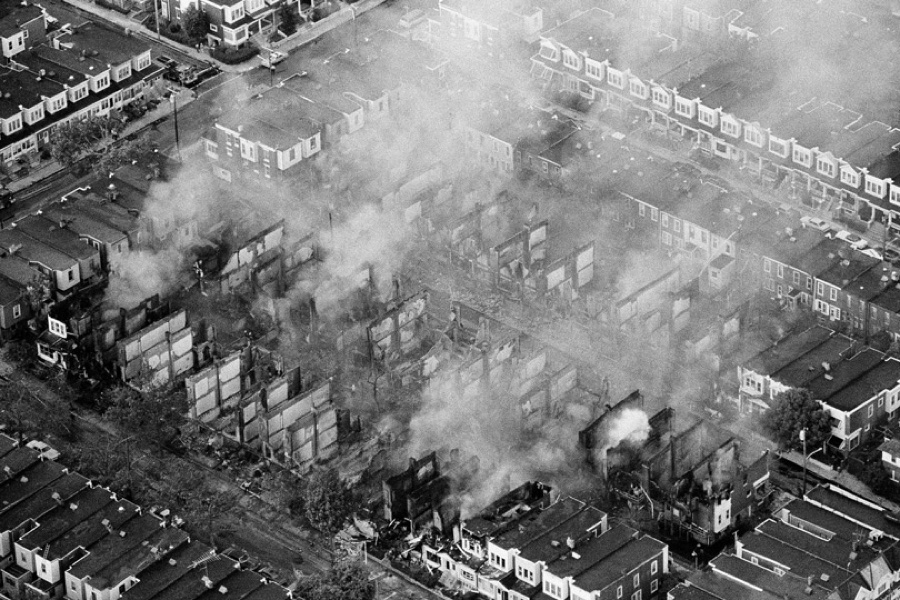 On Friday, locals will gather on the 2400 block of North 59th Street to celebrate its transformation into W. Wilson Goode Sr. Way, a City Council–approved homage to Philadelphia’s first Black mayor.

It’s true that Goode was a political trailblazer, and that his post-political life has been an exemplary model of service to Philadelphia’s Black community. But that triumphant legacy is overshadowed by one ineradicable fact: He was the mayor who authorized Philadelphia police to drop a bomb on a house in West Philadelphia, igniting a fire that killed 11 Black people, including five children.

The MOVE bombing on May 13, 1985, is one of the most devastating tragedies in Philadelphia history. Not only did the incident take the lives of those 11 people, but it also destroyed 61 houses and continues to serve as a painful reminder of how state-sanctioned violence can devastate communities of color long after the event. (Many of the shoddily rebuilt houses on the 6200 blocks of Osage Avenue and Pine Street haven’t been occupied in more than 15 years.) The bombing continues to serve as a major point of contention for contemporary conversations surrounding the racial divide in Philadelphia: We can’t ignore the fact that a Black neighborhood, scarred by wholly preventable tragedy, has yet to fully heal itself.

Now City Council has decided to honor Goode by naming a street for him. Like the Frank Rizzo statue — a constant, wrenching reminder to Philadelphians of color that their lives don’t matter in their own city — W. Wilson Goode, Sr. Way enshrines an irredeemably tainted legacy. How could anyone in our local government think that now would be the right time to propose something like this?

“Given the role he has played in our city to inspire African-American young men, given the mountain he climbed to be the first African-American mayor in the city of Philadelphia, I think he is more than worthy to have a street named after him,” Councilwoman Blondell Reynolds Brown, who voted for the name change, told WHHY.

But all of the inspiration Goode provided as a Black political trailblazer can’t undo the trauma that his actions inflicted on an entire community. What Brown and the Council members who introduced the resolution (Curtis Jones, Cherelle Parker, Derek Green, Mark Squilla and Jannie Blackwell) have failed to realize is that honoring Goode for being Philly’s first Black mayor without acknowledging his role in bombing a Black neighborhood is historical erasure. Such an error is like giving now-disgraced former DA Seth Williams a building named after him for being Pennsylvania’s first Black district attorney without acknowledging he is currently behind bars for corruption.

I have lost a great deal of respect for those within City Council who thought this was a good idea, because it further speaks to the hypocrisy of their advocacy for Black lives. Councilwoman Helen Gym called out Rizzo’s racist history and demanded that his statue be removed — so why did she let Goode off the hook with her vote for this honor? Councilman Derek Green spoke out against racial discrimination targeting an entire population in the city — but somehow can’t see that what Goode did is as damaging?

The only elected official so far who is showing some regret for her vote is Councilwoman Jannie Blackwell, who told KYW: “I didn’t realize it was happening until last week in Council. I didn’t remember signing it. I didn’t know it has passed. I should have been more careful, especially since MOVE is in my area.”

It’s clear that few if any regular citizens wanted this street to be named after Goode — in fact, more than 450 people have already signed a petition calling for it to be removed. There were no public demands or community-wide efforts to support this renaming — unlike with the MOVE bombing historical marker.

If I were the former mayor, I too would probably want my legacy to be reframed beyond the MOVE bombing — but City Council should not and cannot be the agent of that effort. But where is the restorative justice for the families of those killed and harmed? Why should they have to suffer knowing that an institution funded by their taxpayer dollars had a hand in repairing the image of a man who approved an act of terror?

History will remember not only those who deeply afflicted a community, but those who were complicit in trying to erase the memory of the harm. Shame on you, City Council.