The heavy rain and flooding in the area is unrelated to Hurricane Florence, which could approach the Southeast Coast as a category 3 hurricane later this week. 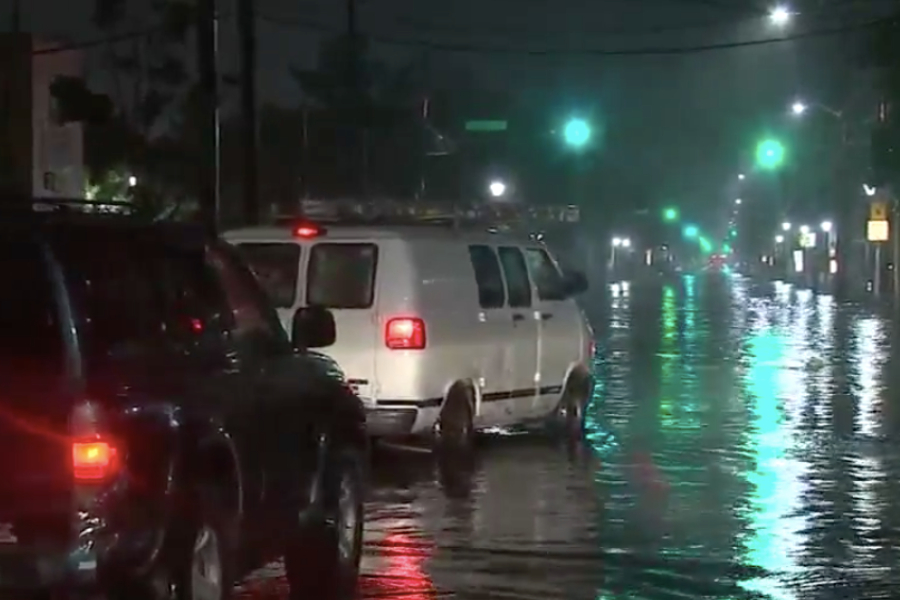 Flooding at the Jersey Shore. | Image via 6ABC Action News

Bad news for those cursing the miserable weather this weekend: The rain isn’t letting up anytime soon.

In fact, the forecast is particularly bad at the Jersey Shore, which is currently under a coastal flood warning until 2 p.m. on Monday (and a coastal flood watch until later in the evening). The following counties are affected: Atlantic, Cape May, Cumberland, Middlesex, Ocean, Southeastern Burlington, and Western Monmouth.

Forecasters are urging residents at the Jersey Shore to use caution during high tide, which occurred between 7 a.m. and 9 a.m. on Monday and will again between 8 p.m. and 10 p.m. later in the evening.

During this time, 1 to 2 feet of flooding above ground level is possible in low-lying areas near shorelines and tidal waterways. Waves along the Atlantic oceanfront could reach 6 to 10 feet — or 5 feet across the Delaware Bay. Roadway flooding is expected, and some roads may become impassible.

CBS3 reports that residents in Avalon, Ocean City, and Stone Harbor have posted photos of flooded streets, including main roads like 96th Street in Stone Harbor.

A reminder: If a road is flooded, don’t attempt to drive through it. If floodwaters rise around your car, abandon it and move to higher ground, if you can do so safely — or else, you and your vehicle could be swept away. During flooding conditions, don’t park your vehicle along or near streams, rivers, or creeks.

Vulnerable structures could become damaged during flooding. If you live in a high-risk area, consider elevating any furnaces, water heaters, or electric panels. You might want to check out some tips regarding what to do before and during a flood.

FYI: The Jersey Shore flooding is unrelated to Hurricane Florence, which is expected to approach the Southeast Coast (North and South Carolina in particular) as a major category 3 hurricane (meaning wind speeds between 111 and 129 mph) later this week.

Here are the 5 AM EDT Key Messages for Hurricane #Florence. Latest information available at https://t.co/tW4KeGdBFb pic.twitter.com/DpgFeN7OIZ

As of 5 a.m. on Monday, Florence was about 625 miles southeast of Bermuda and sustaining winds of 105 mph, according to the National Hurricane Center. Forecasters are urging East Coast residents to monitor the hurriance closely.

The Philly region is also experiencing rain this week — which is similarly unrelated to Hurricane Florence.

The city and surrounding suburbs are currently under a flood watch until later Monday evening. Expect light to moderate rain throughout the day on Monday, with the threat for heavier rainfall increasing throughout the evening. Flash flooding is possible.