Naturally, there were cheesesteaks, the Rocky steps, and Al Roker explaining the Curse of Billy Penn. 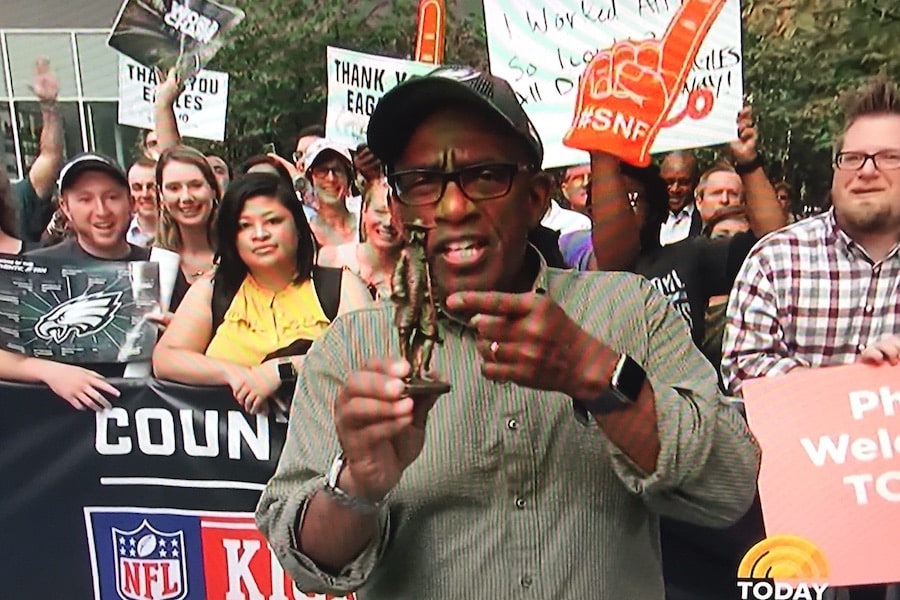 Al Roker explains the Curse of Billy Penn to Today show viewers from the Comcast Center plaza in Philadelphia on Thursday morning. (Screenshot via NBC10)

People started lining up at the Comcast Center plaza as early as 4 a.m. on Thursday morning to be a part of the live Today show broadcast from Philadelphia. The show came here in honor of Thursday’s Eagles home opener, the rights to which are, not coincidentally, owned by NBC, which is, of course, owned by Comcast.

The Today show broadcast included lots of Eagles jerseys and Super Bowl champ signs. The Eagles cheerleaders were there. Eagles mascot Swoop showed up, as did the actual bald eagle named Challenger, which will fly over the field tonight during the National Anthem. (We’re pretty sure Challenger doesn’t have the option to protest.) 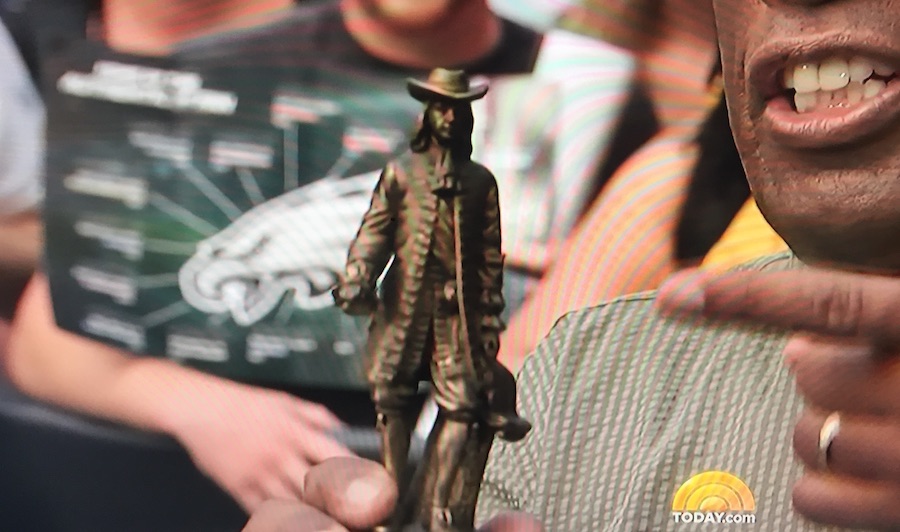 Then, as Roker explained, after an ironworker placed a replica of that statue atop the Comcast Center in 2008, when the Comcast Center was the tallest building in Philadelphia, the Phillies won the World Series. And, in finally wrapping up the story, Roker told viewers that a similar statue was placed on the newest (and tallest) Comcast skyscraper before the Eagles won the Super Bowl earlier this year. 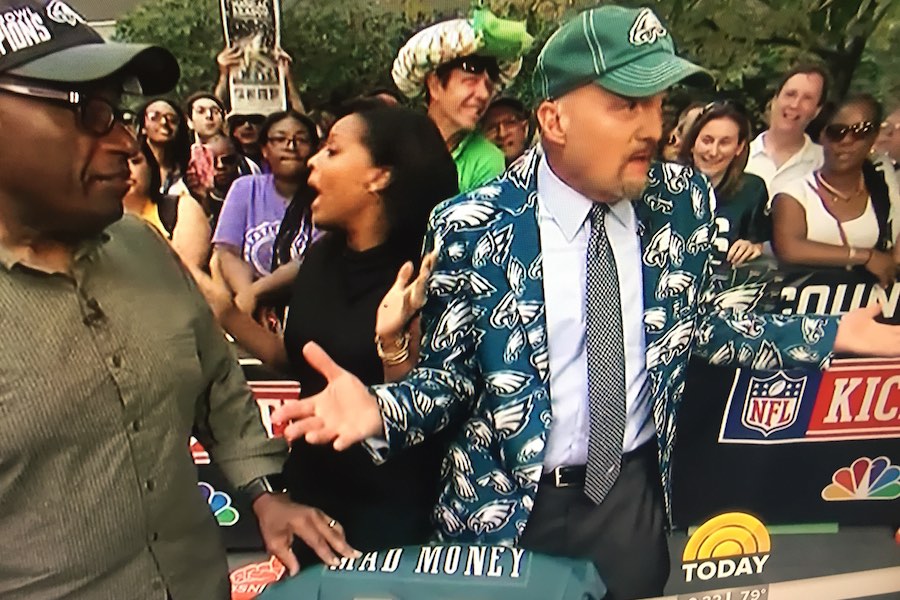 Jim Cramer on the set of the Today show at the Comcast Center plaza in Philadelphia on Thursday morning. (Screenshot via NBC10)

You can pick one up online for around $90.

Other familiar faces on the Today show broadcast from the Comcast Center included Philly chefs Kevin Sbraga, Jennifer Carroll, and Brian Duffy, who all whipped up some football-style grub for the cameras.

But the most notable visitor — well, she was actually co-hosting the Philly portions with Roker — was Philly native Sheinelle Jones, who went from co-hosting Fox 29’s morning show with Mike Jerrick to working for NBC News national.

Jones took viewers on a tour of Philadelphia that naturally included the Rocky steps and statue. (Do they put that in the contract or something?) And she ate cheesesteaks (again, contract?), but opted for South Street’s Ishkabibble’s over the typical broadcast choice of Pat’s or Geno’s.

She finished the segment with a stop at the newly renovated LOVE Park, where she interviewed Mayor Jim Kenney, who said his one favorite thing about Philadelphia is our diversity.

“Most of the people are decent and kind and friendly towards each other,” Kenney said on the Today show. “It’s just when it comes to sports that we get a little crazy.”

Live coverage of the Eagles-Falcons game begins at 7:30 p.m. Thursday on NBC10. Kickoff is at 8:20 p.m. Oddsmakers favor the Eagles to win … but only by a hair.