A Conversation With Doug Pederson, the Greatest Coach on Earth

Philly fans, emotional intelligence, self-doubt, and what it feels like to win a freaking Super Bowl. 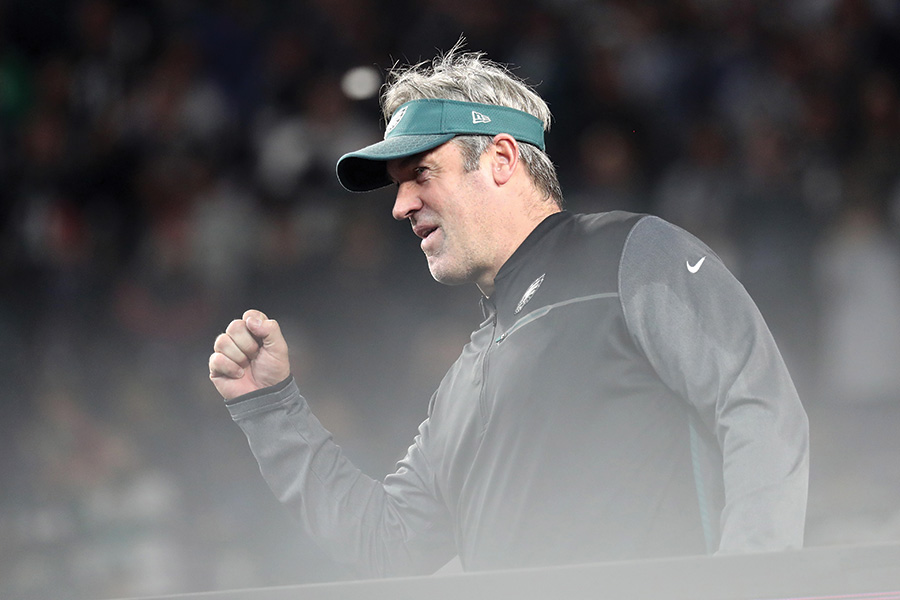 You’ve played and coached in a lot of cities. How do Philly fans compare?

The only other place I can compare it to is Green Bay, quite honestly. The fans there are very passionate. These guys are passionate. They’re well-educated about football, about the Eagles. And they want to see the Eagles succeed. When Carson went down at the end of the year, it was kind of like, well, there goes the season, let’s get ready for next year — that was kind of the feeling I had from the city. But man, they got right behind Nick Foles, and I think it showed us how supportive this fan base is.

Do you guys really feel that?

We do. Every Sunday. Every time a player is in the community doing an autograph signing. Or my wife and I are out to dinner. I go back to my first year, when we had a five-game losing streak, and you’re kind of like, gosh, honey, should we really go to Capital Grille tonight? We go, and people are like, we’re behind you, we love the Eagles, we support you guys.

How are things different since the Super Bowl?

You’re a little more recognizable. A few more autographs, a few more pictures. A few more people are waiting for me at the airport when I come off a flight. They’re out by baggage claim because they know I’m on the flight. And so that’s never happened before. I remember Andy Reid telling me one time: When they stop talking about you or when they stop asking for autographs and pictures, you got a problem. So you do as many as you can.

You played and coached here before. Has your sense of the city gotten deeper?

I just think now being the head coach, I probably have a little better feel for the city. A coach, especially the head coach —
I gotta be aware of everything surrounding the team. But I’ll tell you this: I think any fan base — and speaking of ours in Philly — the more honest and transparent I become with them, and not filling them full of crap, I think they respect you more.

What stands out from the Super Bowl parade?

Man, I’ll tell you, the biggest memory is just the amount of people who came out. From the moment we left the stadium to the time we got to the Art Museum, which felt like an entire day, just the amount of people to get a glimpse of us as players, as coaches, as an organization. I think that truly resonated with me from a standpoint of how the fans really connect with the Eagles.

Has it sunk in that literally no matter what happens from here on, you’re part of Philadelphia lore?

Quite honestly, it probably hasn’t sunk in yet like that. In some of the quiet moments at home, my wife and I might enjoy a glass of wine. It’s just her and I, and we’re looking at the stars and going — do you believe this right now? We’re world champions.

You write in your new book, Fearless, about emotional intelligence. I’m curious to hear you talk about how that impacts the way you coached this team.

Obviously, it’s a performance business that we’re in, wins and losses. And I believe that if you’re not building relationships with your players — how can I ask a player to do something if I don’t have his trust or he doesn’t have my trust? I have to get to know my team on more of an in-depth level. A number, an analytical number, is not gonna tell me that. I’ve got to have one-on-one conversations — I gotta have dialogue with players. The reason why I do a player council, a player committee, is so I can communicate things through them and they can communicate things back to me. I listen to them. I think one of my strengths is listening.

So I just think that building those relationships and being smart and understanding the dynamic of the locker room … because it is a dynamic. There’s a lot of cultures, a lot of different backgrounds that come together, ethnicities, whatever. And you have to have a handle on that.

Do you find time to talk to guys one-on-one?

I do, I do. A lot of times during training camp, when other things are going on, I get a chance to bounce around and talk to guys — maybe in the cafeteria, or sometimes they’ll run by my office and I’ll just grab them and have 30-second conversations, two-minute conversations. They don’t have to be long.

A lot of guys on this team, you included, are pretty strong when it comes to religious faith.

As I mentioned before, there’s a lot of backgrounds, there’s a lot of religious people that might have different beliefs. And I’m very mindful and respectful of all the religions. It’s not that I’m forcing my faith and my beliefs on anybody else whatsoever. But we also have an influx of Christian athletes who enjoyed praying together after practices, after games. And you know, it’s nothing that we force on anybody. But if somebody comes and asks me, asks the questions, then yeah, I’m gonna say: Here’s the reasons why. And I think that’s kind of what’s happened with the team, and people have really embraced it.

You guys also had to deal with the National Anthem controversy last year. What impact did that have on team chemistry?

You know, that’s something I communicated through my player council. And yet, you know what? No one knelt for two years; they stood. We’ve got some great leaders on this team. I think of Malcolm Jenkins, I think of Chris Long, Torrey Smith when he was here. And a couple of other players. It’s not about defying the flag or the military or the men and women that have fought for our freedoms. We live in a world that’s a little crazy right now, and you’re seeing it all around with the shootings in schools and different things. And these guys just want to bring awareness to some of this and help these communities. Chris Long, his community was affected by it. So I’ve been very respectful and mindful of that. But at the same time, I think all our players do respect — I know they do — they respect the flag, they respect the military, and they all stand.

You’d never been an NFL head coach before. Did you ever have doubts?

Inside of me, I always felt like I could do it. I had confidence in my ability to do it. But I’ll tell you, the first month after taking the job — it got overwhelming from the standpoint of, sometimes you’d begin to doubt just a little bit. Am I qualified? It took me a while to learn to manage my time with meetings and doing football stuff and personnel stuff with Howie. Once I got that down and got into the OTAs my first year, that’s when things really began to settle down. But even leading up to that, you still kind of question, man, how am I gonna get this team to believe in me, a new head coach with no experience? So you start kind of questioning, man, did I bite off more than I can handle and all that? Look, I kind of just reflected back to my days [as a high-school coach] and stuff my wife said all the time about keeping it simple, and this is what you’ve been bred to do. And I think once I got past that, things became a lot smoother.

People doubted the team going into last year. You guys used that as motivation, right?

We did. People doubted my ability going into the season. And that’s okay. The thing is, this is what I love about this team: We don’t listen to that stuff. We block the noise out. Yeah, okay, we hear it. But that’s not who we are. This is who we are.

Published as a part of “Remember That Time We Won The Super Bowl?” in the September 2018 issue of Philadelphia magazine.