After an uptick in injuries, a forest fire and a report of gunshots in the area, officials have decided to block entrances to the storied swimming hole on Saturdays and Sundays. 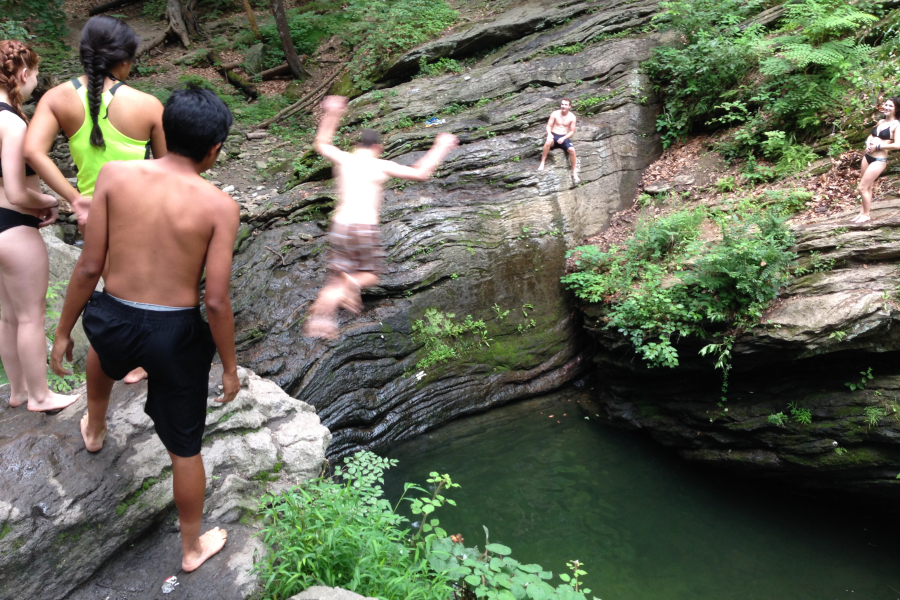 A warning to the hundreds of visitors who visit Philly’s notorious Devil’s Pool on weekends: Starting Saturday, August 18th, the site will be closed on weekends.

Officials are blaming a dramatic increase in public safety concerns like visitor injuries, overcrowding, crime and pollution for the new policy. If you’re not familiar, Devil’s Pool is a scenic waterfall pool in the Wissahickon, which has, over the years, earned a reputation as a legendary — and illegal — swimming hole. (I first wrote about it at length in 2015.) On sunny weekends, hundreds of people gather at the pool and take turns jumping off nearby rocks into the water, despite the fact that swimming anywhere in the park is illegal and officials have repeatedly pledged to crack down on those who violate the law.

Park visitors often say that Devil’s Pool provides a much-needed and otherwise unaffordable escape from the city’s heat and bustle. But with the large crowds comes garbage that overflows the park’s trashcans — as well as an uptick in injuries, alcohol use, and crime in the area.

The public safety concerns, which have swelled as social media posts vastly increase the site’s popularity, have reached an all-time high, according to Maura McCarthy, executive director of Friends of the Wisshickon, the nonprofit preservation organization that helps oversee the park.

McCarthy said she supports the city closing the site on weekends and “taking initiative on the issue,” adding that she’s not sure how the weekend crackdown is “going to work, but we’re really glad the city wants to enforce resources there.” 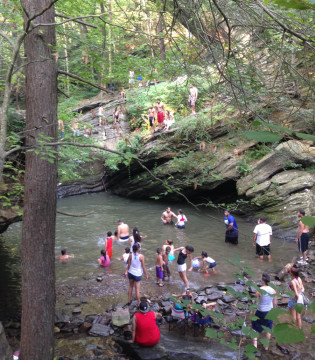 McCarthy said that on Saturday and Sundays through late September, Parks and Recreation plans to erect barricades at two trailheads at Valley Green Road, as well as a trailhead near Livezey Lane — the three most popular ways to access Devil’s Pool. She added that park visitors will not be able to access the site of Devil’s Pool at all on weekends.

Parks and Recreation did not immediately respond to a request for comment on Wednesday. Tiffany Thurman, the organization’s chief of staff, told WHYY that Parks and Rec the decision to close access to trails leading to Devil’s Pool was the result of a task force formed by city officials and community members who discussed the site’s public safety issues.

One of the biggest issues at the site is the lack of cell phone service, so when an injury or incident does occur, it’s difficult for people at the park to get in contact with police or emergency services. Plus, because getting to Devil’s Pool typically requires at least a 10-minute hike through the woods (on foot), it’s hard for services to get there when they need to.

Previously, FOW deployed three- or four-member weekend crews at Devil’s Pool, who served as friendly stewards and talked to visitors about the park and the potential dangers (including unsanitary conditions) of swimming in the Wisshickon Creek or Cresheim Creek, which flows into Devil’s Pool. But McCarthy said that effort is no longer enough.

FOW had put in a formal request to the city to close the site in the evenings, McCarthy said. That decision came after three high-profile incidents, she said.

The first occurred in late May or early June, when a bonfire started by park visitors grew into a forest fire in the hills above Devil’s Pool, which took “a very long time for EMS folks to access” and destroyed an acre of woodland. The second occurred in late June, when a visitor fell from bridge in the park and required full EMS extraction, she said. And the third involved a report of shots fired in the neighborhood above Devil’s Pool, which she said “led to a helicopter search above the park.”

“As I said, you cannot search on foot there,” McCarthy said. “There’s no radio assistance. There’s no cellphone assistance.”

It’s difficult to monitor injuries and issues at Devil’s Pool: There’s no official address system for locations within Wissahickon Valley Park, so incidents that occur in the park are often appended to the closest physical address, usually in the 5th or the 14th police districts. In 2015, FOW began installing kiosks at several locations inside the park, establishing a physical address that EMS systems could use to locate park users. McCarthy said she will soon meet with officials to “make sure that those markers are being appropriately used.”

McCarthy blamed public safety issues on the site’s growing popularity, noting that FOW recorded 1,200 visits to the site per day over this year’s Fourth of July weekend — an all-time high. Compare that to the record in 2011, which was just 400 visitors per day.

“The social media traffic is insane here,” McCarthy said. “We want to keep the park open, but we’ve got to figure out the infrastructure to keep it safe.” 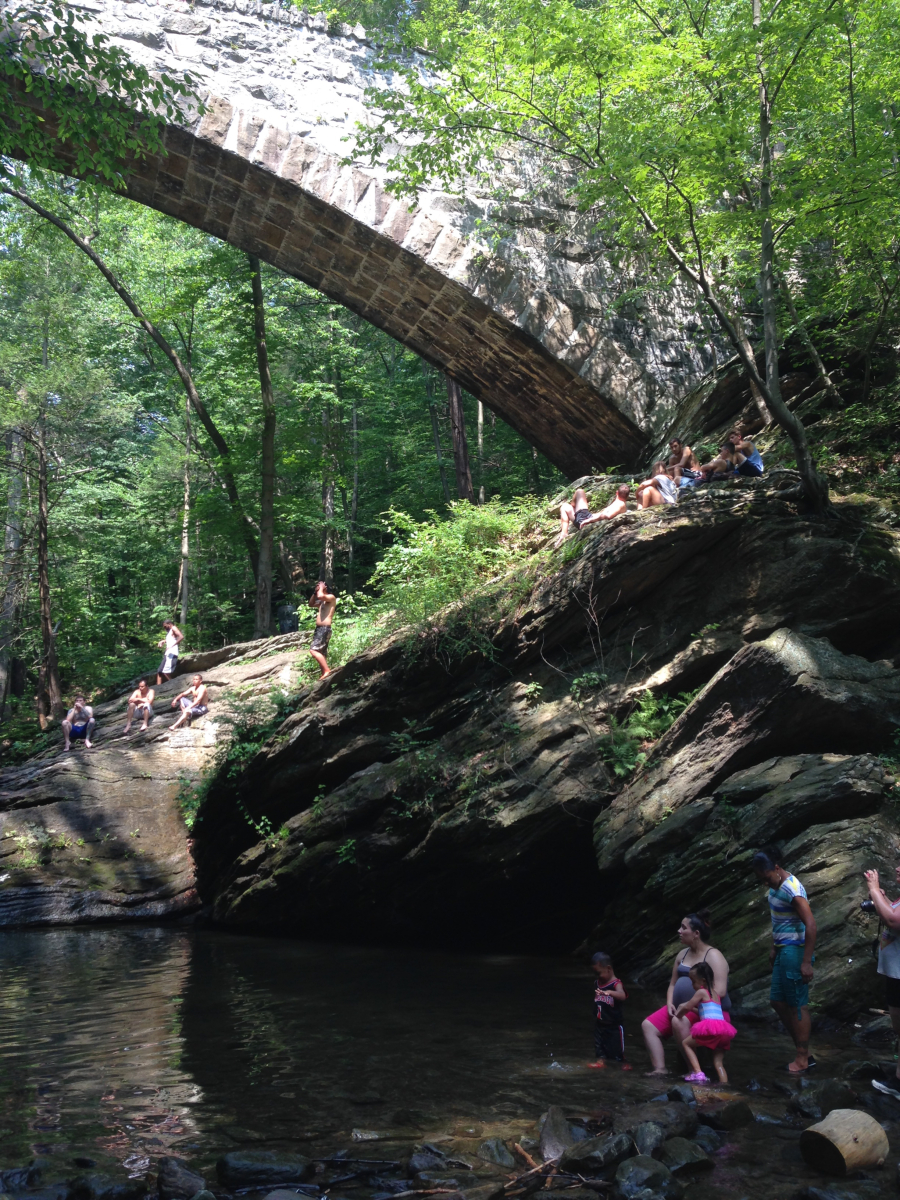 Parks across the nation are grappling with public safety issues as seemingly idyllic swimming sites previously considered rural or off-the-map are exhibited and advertised on social media, leading to an increase in visitors and injuries. The issue is especially problematic, McCarthy said, in an urban park like the Wissahickon.

FOW is working with the city, she said, to create an access plan that will make Devil’s Pool safer and more accessible for visitors. It includes plans to provide cell phone service at the site, McCarthy said, though she noted that that would take time.

“We have to raise that money,” McCarthy said. “We’re looking at a multi-year plan to make this site more robust.”

In the meantime, McCarthy said, she wants park users to know that they’re still welcome in the rest of the park.