The state blames Pennsylvania for the deluge of debris and pollution flowing from the Susquehanna River into the Chesapeake Bay. 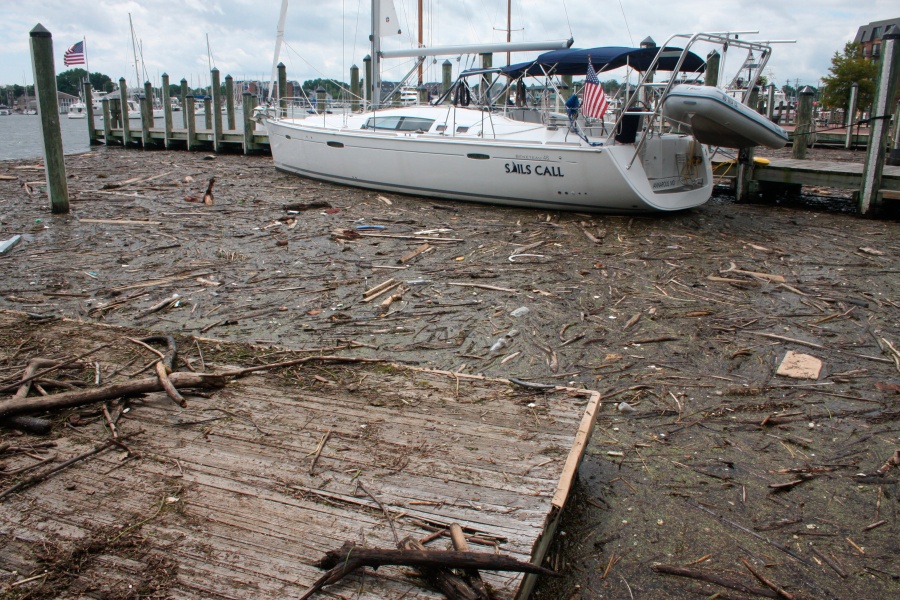 Debris washed into Maryland waters from record rainfall accumulates around a sailboat in Annapolis, Md., on August 1st. Maryland Gov. Larry Hogan said he will raise the issue of upstream states failing to take responsibility for pollution pouring into the Chesapeake Bay at a meeting next week of representatives from six states in the bay’s watershed. (AP Photo/Brian Witte)

The estuary has become clogged with debris, and officials in Maryland are blaming more than the weather: They claim Pennsylvania and New York are “literally drowning” the bay in trash.

How? According to Republican Maryland Gov. Larry Hogan, a significant portion of the debris, sediment and phosphorus pollution entering the Chesapeake Bay comes from the Susquehanna River over the Conowingo Dam, which is located just five miles south of the Pennsylvania border, in Darlington.

The Baltimore Sun reports that Hogan called the runoff an “economic and ecological crisis” during a state board meeting last week. Also speaking at the meeting, Maryland comptroller Peter Franchot said that, “to be blunt, we’re literally drowning in Pennsylvania’s trash.”

Hogan and Franchot’s frustration comes after flooding caused by recent heavy rains forced Exelon to open the gates to the Conowingo Dam to release water, consequently allowing the debris (like wood, plastic and trash) and pollution to flow downstream and into the bay.

Philly.com reports that flows at the dam exceeded 300,000 cubic feet per second, a rate that has not been recorded at the site since Tropical Storm Lee in 2011.

The Maryland Department of Natural resources has urged boaters to use extreme caution in the wake of the flooding. The organization and other state agencies have since worked to clean up the Chesapeake Bay and Chesapeake River, pulling at least 5,000 pounds of debris from the waters — in one day alone.

McDonnell added that the comments “undermine the tremendous strides Pennsylvania has made in improving water quality in the Susquehanna and Potomac watersheds.”

McDonell, Hogan, Franchot, and officials from the four other Chesapeake Bay Watershed states, as well as the federal Environmental Protection Agency, are all set to attend an executive council meeting for the Chesapeake Bay Program on Tuesday, where they’ll discuss the issue.

A recently released EPA report found that Pennsylvania is “significantly off track” in meeting goals to reduce agricultural and urban and suburban runoff, per the Chesapeake Bay Foundation. It also found that Maryland, Pennsylvania and Virginia, while are together have all fallen short in reducing nitrogen pollution from agriculture.

“This is a critical moment for #ChesBay restoration,” said CBF President William C. Baker. “Halfway to the Chesapeake Clean Water Blueprint’s 2025 #goal, it’s time to get #serious about finishing the job. #Pennsylvania is far behind.” https://t.co/JWDXYHfvdl