Four demonstrators were taken into custody during a tense Tuesday morning standoff near Broad and Arch streets, while eight others were later handcuffed and escorted out of a sit-in at the Comcast Center. 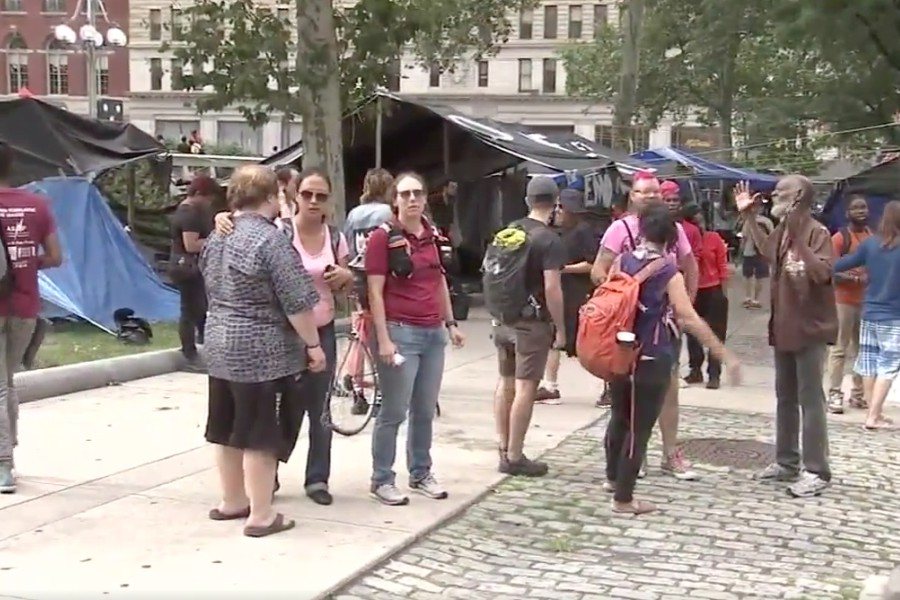 The demonstrations took place on a “National Day of Action Against ICE,” as organized by immigrants rights group Movimiento Cosecha, which held protests across the country on Tuesday. Demonstrators called for the complete abolition of ICE, an idea that some Democrats (like Mayor Jim Kenney) have supported — and Republicans like President Donald Trump have attacked.

The first demonstration in Philly on Tuesday began around 9 a.m. near Broad and Arch streets. Dozens of protesters stood on the sidewalk and streets north of City Hall, occasionally shutting and slowing down traffic on North Broad Street.

Protesters were given several warnings to move, according to the Inquirer. Before midday on Tuesday, police and work crews dismantled a makeshift camp that protesters had erected on a patch of grass east of the Municipal Services Building. From then on, the protest mostly took place on the street and sidewalk outside Arch Street United Methodist Church, including tense standoffs between demonstrators and roughly 50 police officers.

Four people were taken into custody during the protest. All were cited for failure to disperse and released.

Later, another demonstration unfolded at the Comcast Center near 17th and Arch streets. That protest, also led by Movimiento Cosecha, targeted multiple companies across the nation on Tuesday, including Comcast in Philly and Amazon in New York City. The organization demanded that Comcast stop providing internet to ICE officers.

PhillyVoice reports that the protest lasted roughly 90 minutes in the Comcast Center lobby. Eight people were taken into custody and released shortly after.

The demonstrations come days after protesters voluntarily dismantled their setup outside City Hall, where they had camped for roughly three weeks until Mayor Kenney announced that he would comply with their request for the city not to renew a contentious data-sharing agreement with ICE.