Utley earned a reputation in Philly from 2003 to 2015 as a “gritty” player with old-school sensibilities and workmanlike focus. 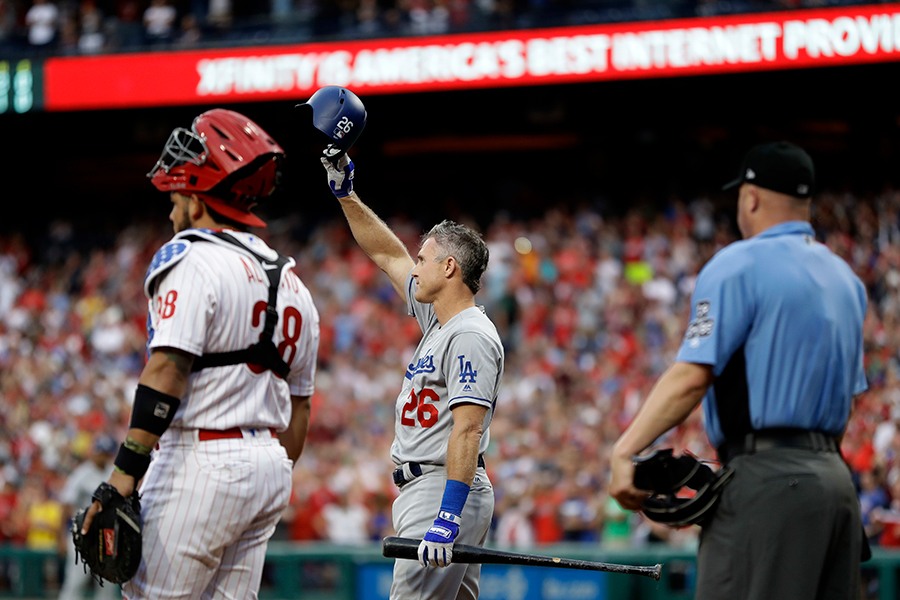 “Chase Utley, you are the man,” Harry Kalas famously said 12 years ago when Utley took home from second in spectacular fashion after a meager infield pop fly. Philly fans never seemed to forget.

As Utley approached home plate for his first at-bat in what will ultimately be his last series in Citizens Bank Park, attendees took to their feet and gave him a standing ovation, an acknowledgment of his years of possibly Hall-Of-Fame-level playing. He waved his helmet meekly in return, and even his Dodger peers in the dugout seemed moved:

Utley, who spent 2003 to 2015 as a second baseman with the Phillies before returning to his home state to play for the Dodgers, will be hanging up his cleats at season’s close. He earned a reputation in Philly as a “gritty” player with old-school sensibilities and workmanlike focus. He carries a .276 career batting average with more than 10,000 RBIs and 259 HRs, the lion’s share of them right here in Philly; he’s played in six All-Star games and won four Silver Slugger awards.

When the Phillies finally tallied a World Series victory in 2008 after a 28-year dry spell, Utley, in true Philly fashion, let fly what we were all feeling at the celebration that followed days later:

“World champions … world fucking champions!” Utley bellowed from a stage in the middle of Citizens Bank Park. Aired live, the crowd loved it; the world loved it. Broadcasters apologized and the FCC huffed. But it was worth it, pretty much everyone watching agreed.

Utley will unfortunately have to miss the upcoming alumni weekend at the ballpark on August 3rd through 5th, when the 2008 World Champion team will be the honorees.

The Dodgers took the win last night, 7-6. Utley’s at bats were unproductive, but that’s just a note in the margins.

In a post-game press conference, Utley reflected on his relationship with the fans here.

“This city is … an experience I’ll never forget,” Utley said. “The fans in the seats really elevated our game and made us focus a little more. It added a little bit of intensity and adrenaline … It’s a blue-collar city. It’s a city that respects guys that play hard, guys that want to win. I feel like I did that when I was here, and I still do that.

“We fed off the energy here in this park,” he said, “and it’s something I’ll never forget. I get chills just thinking about it.”