And plenty of people came out to celebrate on Thursday. 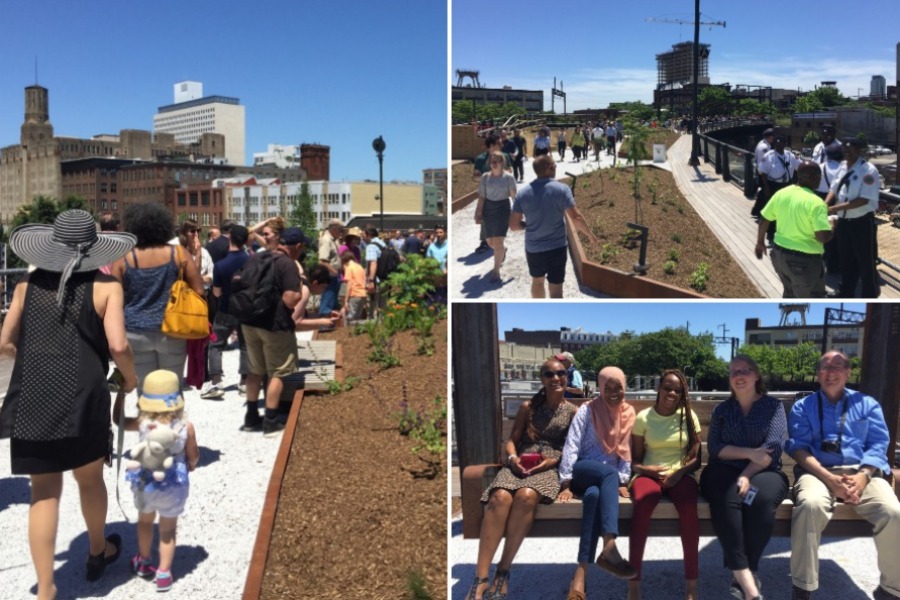 The day has come, Philly: The city’s brand-new elevated Rail Park is (at long last) open.

You can now take a leisurely stroll up what was once the Reading Railroad Viaduct to check out the city’s newest public space, complete with a expansive views of the city (high-rises covered in street art included), landscaping, benches and huge industrial swings.

Standing in the sunshine on Thursday morning, officials cut the ribbon on the first phase of the new Rail Park. It’s a quarter-mile in length, and it twists from 13th and Noble streets to the 1100 block of Callowhill Street. When the entire Rail Park is complete (no word yet on when that will happen), it will stretch three miles from 9th Street and Fairmount Avenue (phase two) south to 11th and Vine streets (where it will connect with the current phase), and then west from 13th and Noble streets to the Art Museum area (phase three). 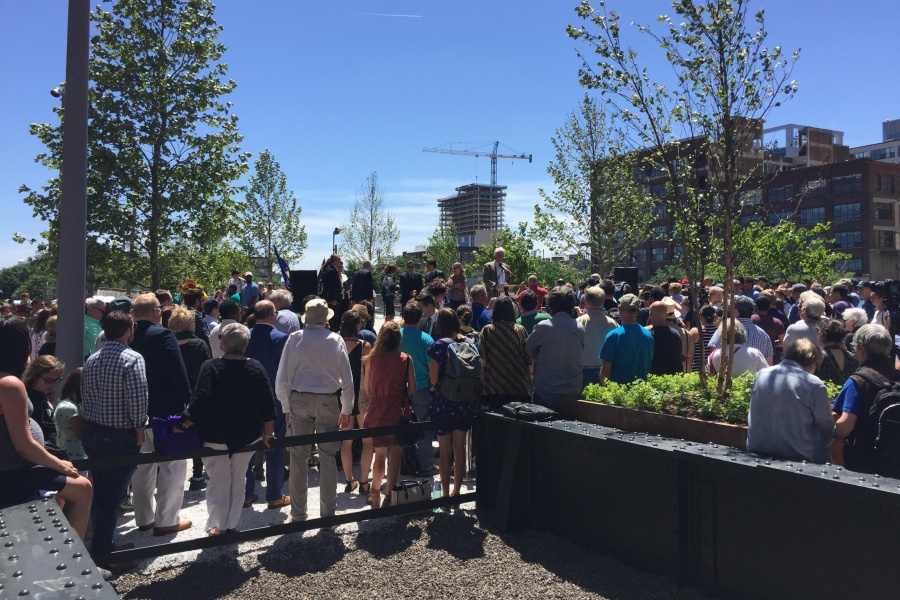 A lot of advocacy and funding ($10.8 million, to be exact) went into the just the first phase of park — which is why plenty of city and state officials, philanthropic organizations, cultural and business leaders and civic groups attended the opening on Thursday. From the city, that included Center City District president and CEO Paul Levy; Mayor Jim Kenney, city managing director Michael DiBerardinis; Department of Parks and Recreation commissioner Kathryn Ott Lovell; and Friends of the Rail Park’s new executive director, Kevin Dow (whom we spoke to at length in May).

Officials began speaking around 11 a.m. before cutting the ribbon to the park at noon, when hundreds of attendees flooded its primarily gravel path, walking slightly uphill toward 11th Street. 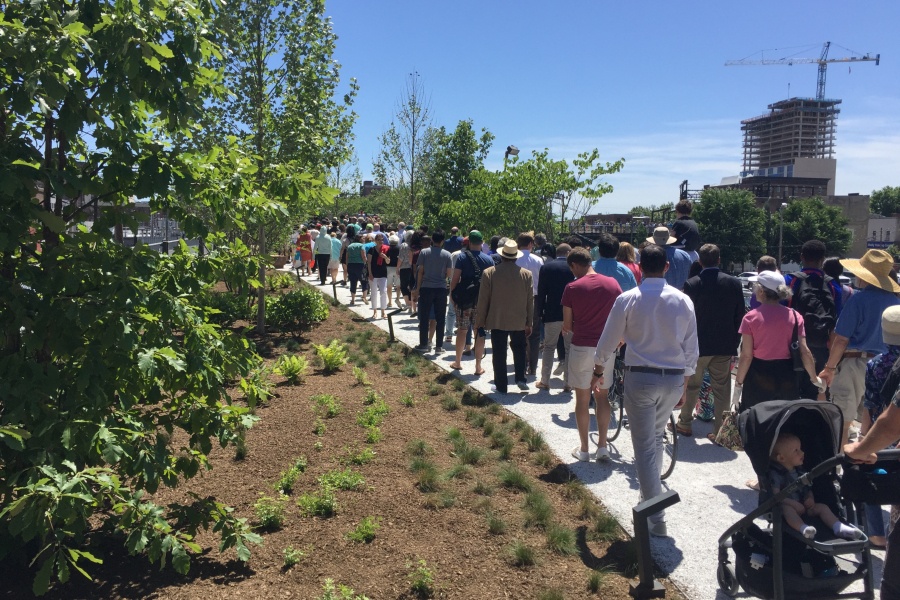 Dow said the “energy and the excitement” at the event was “contagious. ”

“This is the first time we’ve been able to bring everyone who’s supported us and invested in us and cares about us together,” Dow said. “We have more than what we expected out here. We have the diversity of folks that we wanted out here — I think we could always do better in that regard, but it was very nicely presented, and I think everybody is enjoying themselves.

“I dialed up Mother Nature last night and she came through for us,” he added, noting the sunshine, which Levy called “the best weather in the universe.”

The park was full of smiling faces — including those of urbanists like Dena Driscoll and Jon Geeting, as well as 28-year-old Vanessa Xie and 30-year-old David Seok, who live in Roxborough. Xie said she grew up in Chinatown and wanted to check out the new park with her dog, Paisley. 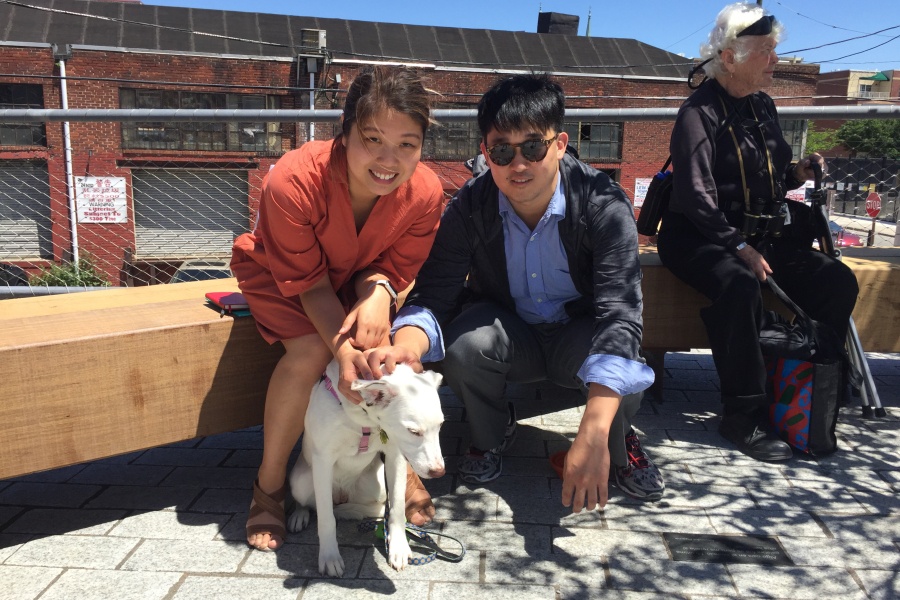 Seok, who studied architecture at Drexel University, works for The Lighting Practice, a Center City-based firm that helped design the lighting for the Rail Park. Both he and Xie said they were thrilled about the new park; Seok said he only wishes there was a little more grass. Aside from the landscaping, the Rail Park’s narrow path is mostly gravel.

“I’d like more greenery in future phases,” Seok said. “I’d like to believe that’s the vision of the park — more organic … more Philly.”

Levy said he and others behind the park (it was largely brought about by the CCD, Friends of the Rail Park and the Department of Parks and Recreation) planned for wheelchair accessibility (hence the path). But he’s open to including more green space in future sections, which won’t be as narrow.

“This is phase one,” Levy said. “This is the narrowest point. Over there it’s going to be much wider — we can get so much more done. People are going to have constructive criticism of this phase, and we don’t have to tear this up. We just do new ideas on new pieces of the park — I think it has a lot of opportunity to grow.”

Like Dow, Levy was thrilled on Thursday. “To see the hundreds of people who came out today from different neighborhoods of the city, to have dancers here from Chinatown, to have Roman Catholic High School — we wanted this to be a park for everybody in the city and everybody in these neighborhoods, and to see everyone here is incredibly gratifying,” he said.

The park’s technical hours of operation are from 7 a.m. to 10 p.m. — but Dow said people can access the property into the evening, as it’s open 24 hours a day. The space will be maintained and managed in a three-way partnership between the Department of Parks and Recreation, the Friends of the Rail Park, and the CCD.

Kenney celebrated the opening on Thursday and said he looks forward to cutting the ribbon of future phases of the park.

“Today is only the beginning,” the mayor said. “We hope to be back at the Rail Park soon.”

Check out more photos of the Rail Park below. 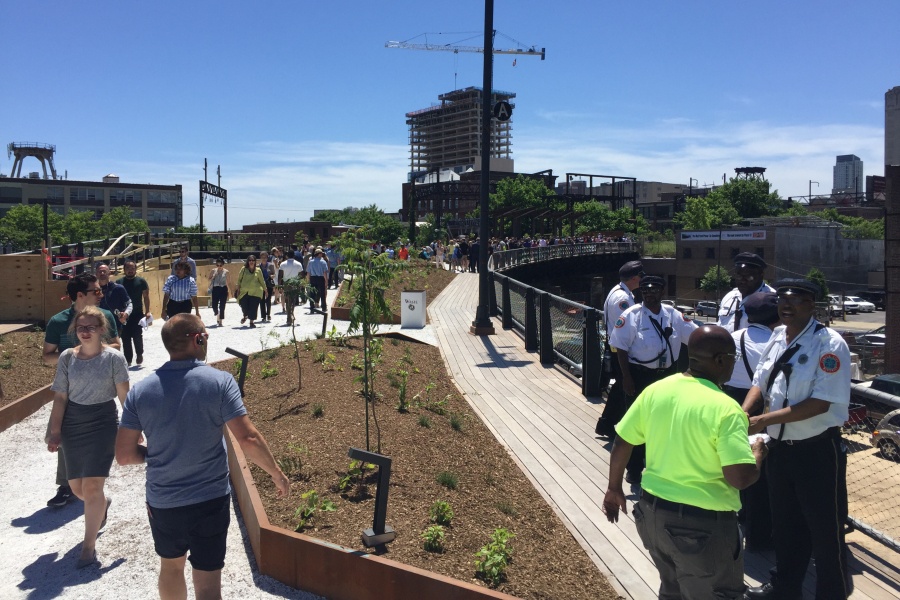 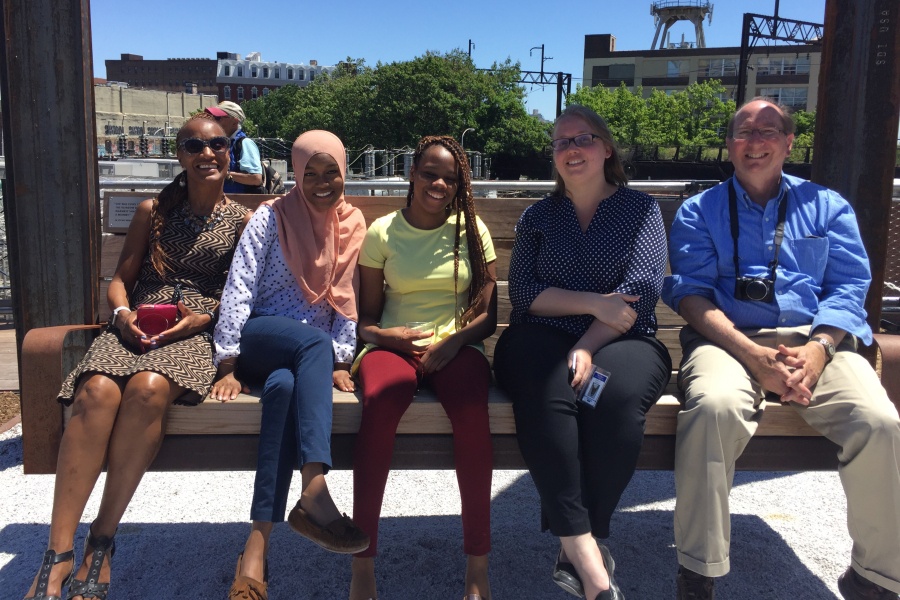 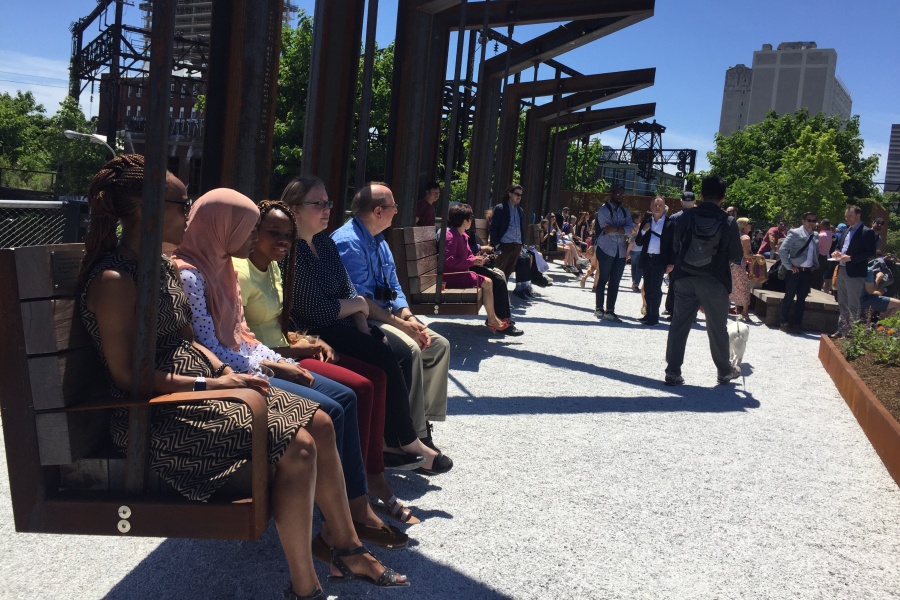 Another view of the swings. 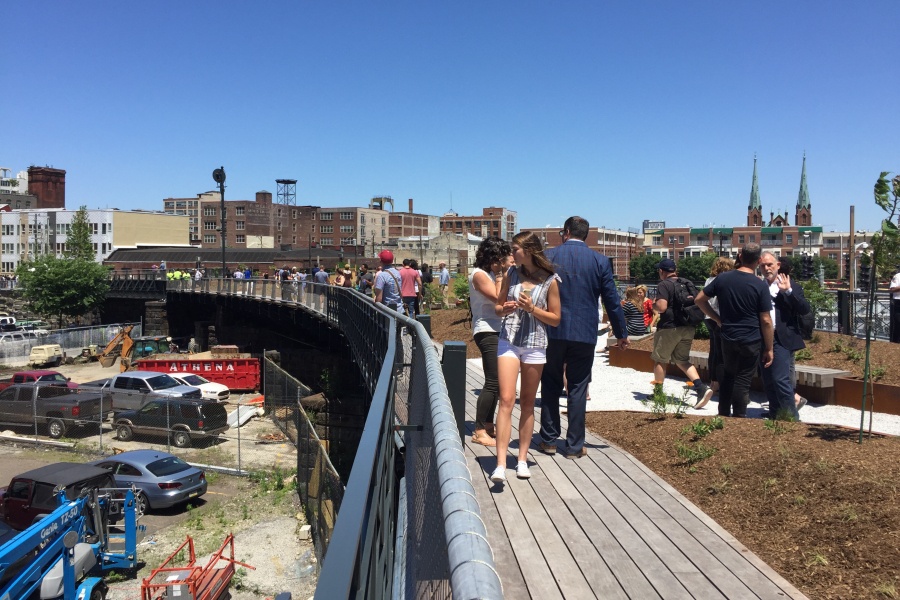 A woman looks over the edge of the viaduct while walking toward the swings. 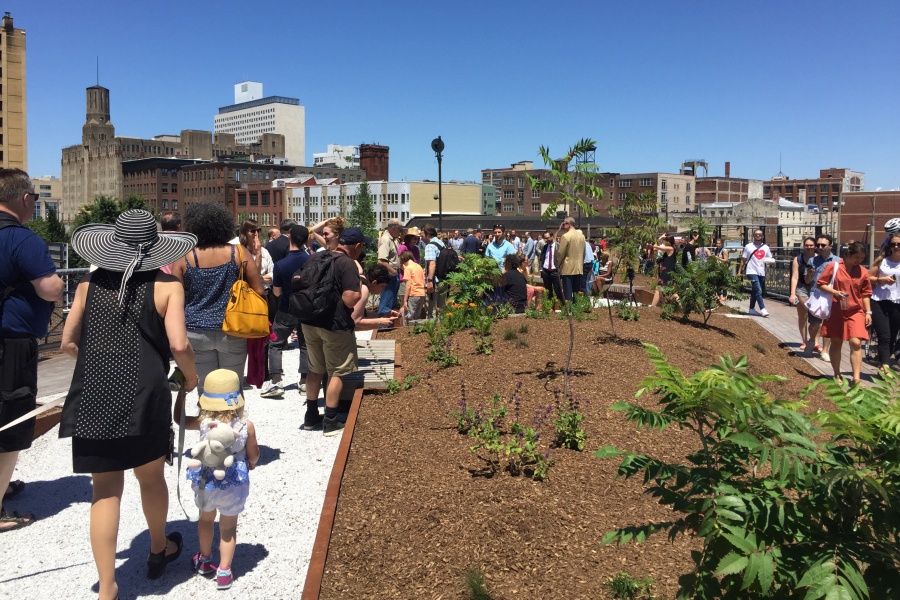 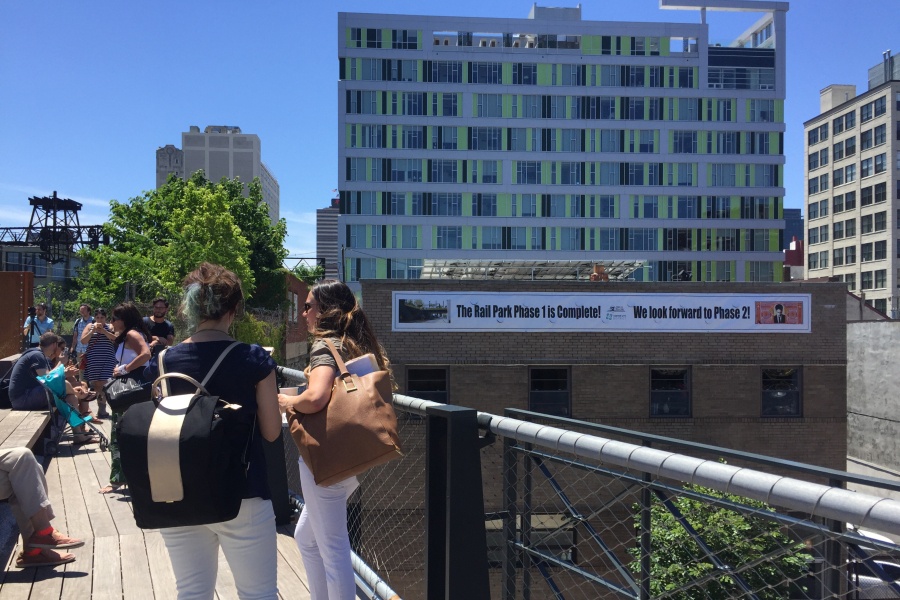 A sign teases future phases of the Rail Park.