What to Expect at Philly’s New Rail Park

Phase one of a proposed three-mile park opens this Thursday. Here’s what the rest of the park might look like — if everything breaks the right way. 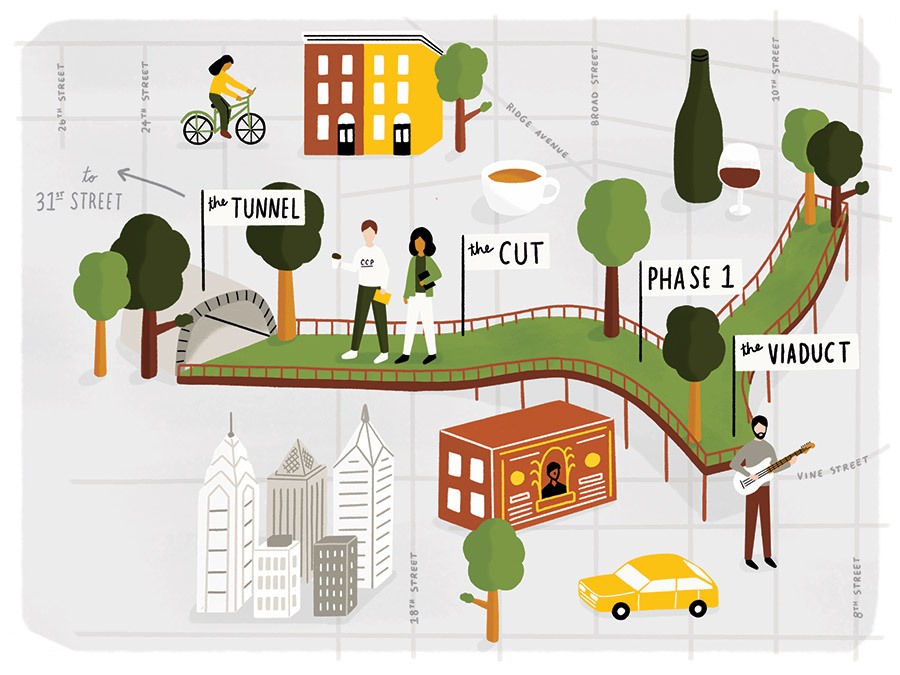 If you’ve been to NYC’s High Line, you know: Abandoned railways can become beautiful public spaces when they get an urbanist makeover. After eight years and $10.3 million, Philly is opening its own quarter-mile rail park this month in Center City. And Friends of the Rail Park, the group leading the project along with the Center City District and Parks and Rec, has even bigger plans; it hopes to grow the park into a three-mile expanse (with bike lanes, a pedestrian path and more) that would transform the way we traverse our city.

What it is: An elevated quarter-mile arc from Broad and Noble to Callowhill between 11th and 12th.
What it’s got: Full 360-degree views of the city; greenery; industrial swings for lounging; modern art; potentially an ice-cream cart.
Obstacles: Removal of contaminated soil; restoration of existing steel structures.
Highlight: Direct view of a striking Shepard Fairey Stamp of Incarceration mural adorning a building on Callowhill.
Will it happen? Opening June 14th at 11 a.m.!

What it is: A roughly half-mile elevated railway stretching from Vine Street to Fairmount Avenue. Meets Phase 1 to form a V-shaped platform overlooking Center City.
What it could be: Lush vegetation; a restaurant, perhaps an outdoor concert space.
Obstacles: Restoration of steel structures; taming overgrown greenery; property owned by Reading International.
Highlight: Imagine summer-night concerts at an elevated park smack in the middle of Center City.
Will it happen? Feels like a no-brainer.

What it is: A roughly three-quarter-mile below-street-level trench running from Broad Street to 21st and Hamilton.
What it could be: Walls of greenery, gathering areas, beer gardens and cafes, retail, community programming.
Obstacles: Access from street level; capping contaminated soil; SEPTA owns the right-of-way.
Highlight: Part could become a green quad for the Community College of Philadelphia, whose campus it bisects.
Will it happen? We say 50-50.

What it is: A roughly one-and-a-half-mile tunnel from behind the Rodin Museum that ends by the Zoo and Brewerytown.
What it could be: An “underground park” with gathering spaces; retail. Pockets of light beaming through openings in the roof.
Obstacles: Plans to erect a condo building near the entrance; selling the idea of an underground park; SEPTA owns the right-of-way.
Highlight: As the longest portion of the park, the tunnel would span from Center City to Brewerytown.
Will it happen? ¯\_(ツ)_/¯

The full vision of the park would cost some $100 million, but the return could be huge. The first two sections of NYC’s High Line cost about $152 million, but the city projected more than $900 million in revenue over 30 years.

Published as “A Rail Big Deal” in the June 2018 issue of Philadelphia magazine.