Burnergate … Collargate … No matter which ’gate you prefer, all that matters is 76ers ownership made the right call in moving on. 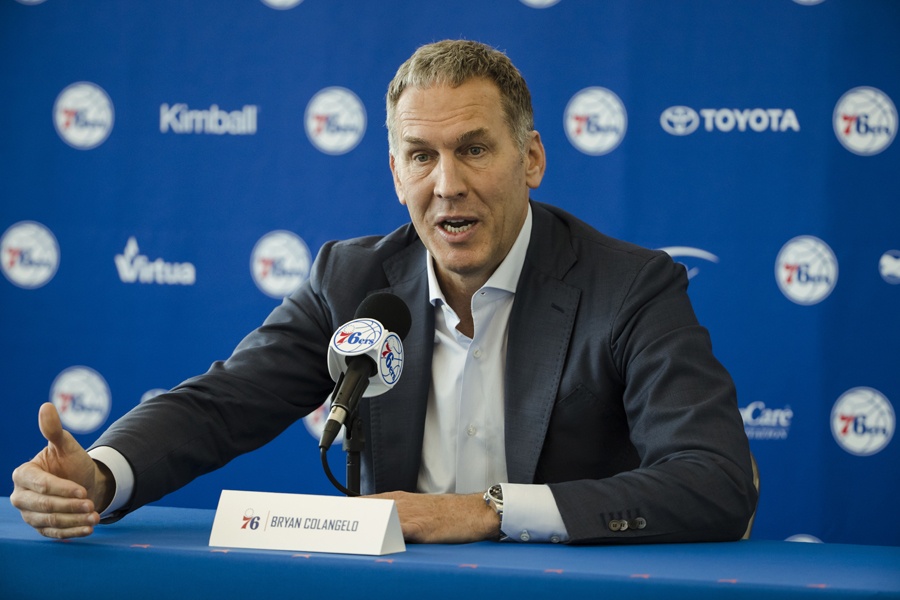 To doomsday-obsessed 76ers fans, the Bryan Colangelo Twitter scandal was an embarrassment of such epic proportions that it very well had the potential to jeopardize the not-so-distant light at the end of “The Process.” As the laughingstock du jour of the NBA, the franchise could kiss goodbye any hopes of signing high-profile free agents like LeBron James this offseason and undoubtedly would soon see the expedited exits of young cornerstones Joel Embiid and Ben Simmons — if the Sixers didn’t move on from their high-collared executive with the burner accounts, that is.

Despite fans expressing a certain lack of faith in the ability of the team’s ownership group to “do the right thing,” the team announced on Thursday that it has accepted Colangelo’s resignation, which more or less can be interpreted as showing him the door. The online hearsay was in fact true: Colangelo’s wife, Barbara Bottini, used anonymous Twitter accounts to defend her husband’s basketball moves and style of dress shirts.

“We find the situation to be disappointing for our entire organization,” the Sixers said in a release. “We are determined to continue the tremendous progress we have made over the last two seasons in our quest to win an NBA championship. As such, we have appointed head coach Brett Brown to oversee basketball operations on an interim basis to lead our efforts in this important offseason. He will work closely with the rest of our talented basketball operations department in preparing for the upcoming NBA Draft and thereafter until a new general manager is found.”

At a news conference this afternoon at the team’s practice facility in Camden, 76ers managing partner Josh Harris sidestepped questions regarding the potential of Process architect Sam Hinkie to return to the organization by saying that the front office is in the beginning stages of the search to fill Colangelo’s old position. There was no flat-out denial, however.

As for Colangelo, he maintains that he was completely unaware of his wife’s actions. Paul, Weiss, Rifkind, Wharton & Garrison LLP, the firm hired by Sixers owners to investigate the burner accounts, released a statement that said it does not believe Colangelo “established or posted content on those accounts.”

The investigation did, however, find “substantial evidence that Mr. Colangelo was the source of sensitive, non-public, club-related information contained in certain posts to the Twitter accounts. We believe that Mr. Colangelo was careless and in some instances reckless in failing to properly safeguard sensitive, non-public, club-related information in communications with individuals outside the 76ers organization.”

All we can say is: good riddance. Time to find a new slant.