Andrew Tornetta — who had charges against him withdrawn after completing community service — insists that he’s no horse-puncher and is the real victim here. 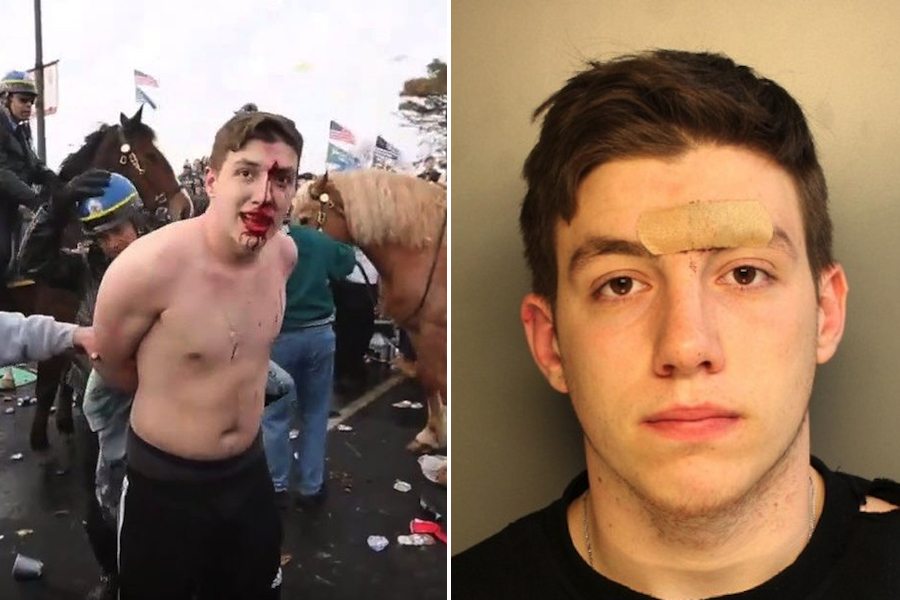 North Wales resident Andrew Tornetta made headlines back in January after police claimed that he had assaulted a police horse as well as a police officer outside Lincoln Financial Field before the NFC championship game against the Vikings.

While police originally sought charges of aggravated assault and assault on police animals, the Philadelphia District Attorney’s office charged him with resisting arrest, failure to disperse, and disorderly conduct. That case was quickly disposed of, with Tornetta entering a diversionary “accelerated misdemeanor program” that allowed the charges to be dropped after he completed community service, which he has done.

Here’s video of part of the interaction between Tornetta and police:

Well, now that the criminal case is over and done with, Tornetta, 20, has filed a lawsuit against the Eagles, Pennsylvania state trooper Wesley Van Wyk, and Philadelphia police officer Paul Tinneny, claiming that he didn’t do anything wrong and alleging that the cops manufactured the horse-punching story to cover up their actions against him.

In the lawsuit, filed earlier this week in Philadelphia Common Pleas Court, Tornetta says that he was hanging out in Linc parking lot M5 on the afternoon of January 21st, along with a lot of other people. Around 3:20 p.m., mounted police, including Van Wyk and Tinneny, tried to clear the “densely packed” area, but Tornetta says there was nowhere to go. It was simply too crowded, and there was no clear path to exit, maintains the suit.

All of a sudden, alleges Tornetta, Van Wyk — still on his horse — grabbed Tornetta by his collar and dragged him, causing his shirt to come up over his head, blocking his sight and causing him to become disoriented. Then an unidentified mounted officer also grabbed Tornetta’s shirt, pulling it off of his body and leaving him bare-chested in the parking lot, according to the suit, before another unidentified mounted officer allegedly struck him multiple times with a police baton.

Tornetta says he managed to get away from the cops but was then detained by an unidentified member of the security staff. Then, he claims, Tinneny emerged from the crowd and hit him in the head and face with his police baton.

According to the suit, Van Wyk and and Tinneny gave statements to a Philadelphia police detective that were false or misleading. He says that Van Wyk told the detective that Tornetta refused to leave the area when told to, that Tornetta punched his horse and him, and that the only force Van Wyk used on Tornetta was a “control hold.” Tornetta says all of those statements are untrue. The suit claims that Tinneny “falsely represented” the events of that day by stating that he saw Tornetta hit Van Wyk and the horse and that Tornetta grabbed at Tinneny’s police baton.

The suit, which seeks unspecified damages, accuses Van Wyk and Tinneny of assault and battery, false imprisonment, and defamation, the Eagles with negligent hiring and supervision of its security staff and premises liability, and all defendants of engaging in a civil conspiracy against Tornetta.

Here is a statement that police made shortly after the incident:

The corporal [Van Wyk] gave verbal commands for the persons to leave the area. However, one person refused. While mounted atop the horse, the corporal began to escort him away from the crowd, again telling him to leave. The offender became verbally combative and maneuvered himself out of his jacket, and was grabbed by his sweatshirt to maintain control, due to him being under arrest.

State Police and the Philadelphia Police Department declined to comment on the litigation, and a spokesperson for the Eagles and an attorney representing Tornetta didn’t immediately return calls seeking comment.

As for the other local man accused of punching a horse, 23-year-old Taylor Hendricks of Whitehall, Pennsylvania, he has entered diversionary program similar to the one given to Tornetta.