Welcome to Philly, land of the sneckdown. 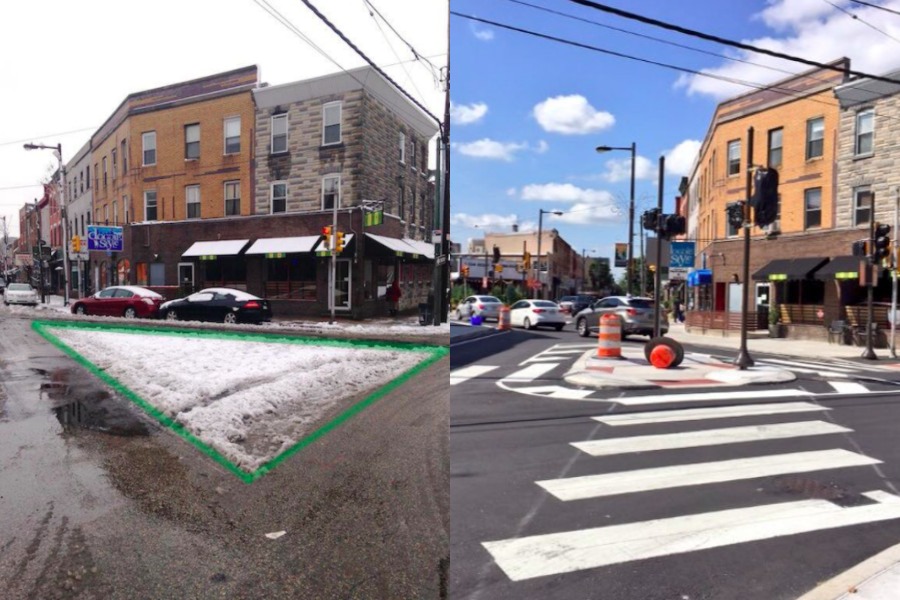 An upgraded “sneckdown” at the intersection of East Passyunk, Morris Street, and 12th Street | Photos by Jon Geeting

Apparently all the snow we’re getting this March could be good for something.

A story published in the Boston Globe on Thursday highlighted an unexpected benefit of snow: In recent years, it’s allowed urban planners to redesign our streets.

How? Because the powder (or dirty, icy slush, in the case of Philadelphia) shows slices of roads and intersections that are underutilized. Planners can use that information to narrow streets and expand sidewalks — traffic-calming techniques that help improve road safety and walkability in a neighborhood.

Plus, apparently those snowy, unused spaces have a name. From the Globe:

“In a 2014 tweet, Watertown native and then-visiting MIT fellow Aaron Naparstek dubbed these unused spaces ‘sneckdowns’ — a combination ‘snowy’ and ‘neckdowns.’ (A neckdown is urban-planner speak for widened areas of sidewalk that narrow roadways and slow traffic to make it easier for pedestrians to cross.)”

The University City District used sneckdowns to its advantage in 2011, while redesigning the infamous three-way intersection of Baltimore Avenue, Florence Avenue, and 48th Street in West Philly. The organization got its hands on a photo of the intersection’s sneckdowns, then presented it to the city and pushed officials to change the roads, the Globe reports.

@ucdphl we love finding new ways to collect data and translate the data to new #PublicSpaces. Where others saw snow we saw “ped plaza potential” How snow has become a tool in urban planning https://t.co/CemB6LWfsc via @BostonGlobe

It worked. The sidewalk was extended via paint and planters.

Philly abounds with sneckdowns — the city has so many that Ambler native Benjamin She of the urbanist political action committee 5th Square made a map of them, according to Technical.ly Philly. It includes more than 40 sneckdowns.

She got the idea from 5th Square co-founder Jon Geeting, Philly’s sneckdown king. In 2014, Geeting posted photos of sneckdowns at one of the city’s most confusing intersections — East Passyunk, South 12th Street, and Morris Street — where eventually, officials approved and implemented a traffic-calming plan.

Geeting has posted plenty of sneckdown pics since then.

One of my favorite @fishtown #sneckdowns at Cedar and Berks pic.twitter.com/t4m4Ot79xh

The Cedar Point triangle also has room for curb extensions. Could just tighten up the intersection on all sides. pic.twitter.com/lvDbRZ89xL

Across the intersection from Reanimator at Norris and Susquehanna pic.twitter.com/Zd5h3hungi