Still Recovering From Friday’s Nor’easter, Philly Region Faces Another One

Here’s what we know so far about the winter storm expected to hit Tuesday night into Wednesday. 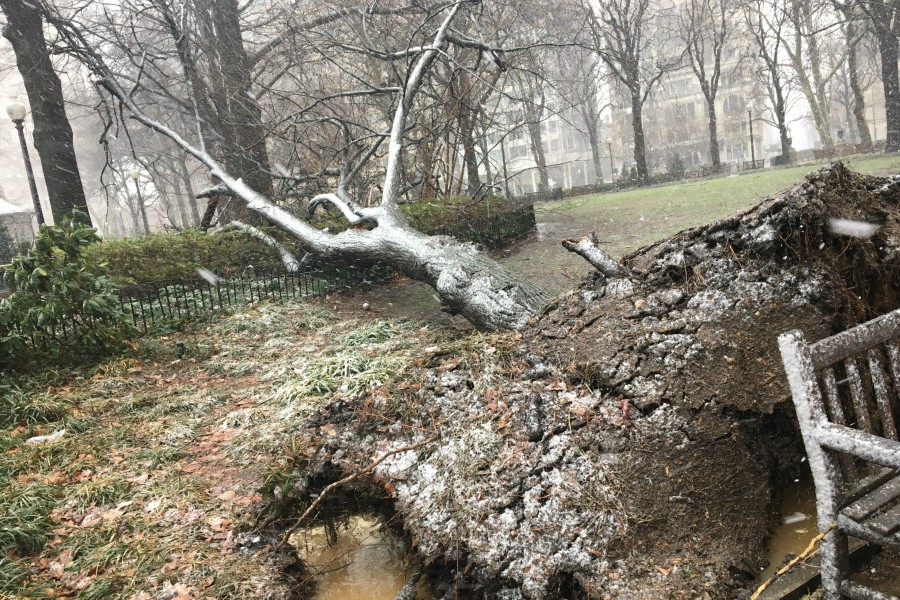 A tree in Rittenhouse square fell in Friday’s storm. | Photo by Joe Trinacria

Let’s take a moment to send good vibes to the roughly 99,000 people in Philly and its surrounding counties who were still without power as of Sunday evening after Friday’s quasi-blizzard.

The unexpectedly harsh nor’easter tumbled trees and knocked out power to about 630,000 PECO customers, making the storm one of the worst in the company’s history, per its incoming chief executive officer, Mike Innocenzo. Innocenzo told the Inquirer on Sunday evening that the organization had restored power to roughly 500,000 people, but acknowledged that, “If you’re not one of those 500,000 we recognize that’s not very comforting.”

We work safely to restore service as quickly as possible. Learn about our Storm Restoration Process here: https://t.co/0Dld9BGe32 pic.twitter.com/haCFwu1Iye

The majority of those still without power are expected to see their lights come on by tonight – but some people might not have power until Thursday.

Crews are traveling from Illinois, Florida, and Mississippi to help service Philly and the surrounding suburbs. This weekend, Gov. Tom Wolf issued a waiver allowing crews to work longer than normally allowed hours in the wake of the storm. In the meantime, school districts like Haverford and Radnor are closed on Monday.

Our utility workers and government officials are working tirelessly to restore power throughout the areas impacted by the week’s powerful #noreaster. The state is working collaboratively to support efforts to make repairs and restore service as fast as possible. https://t.co/jQc4tBuaDl

More bad news: Another winter storm is expected to hit on Tuesday night into Wednesday, according to the National Weather Service. The weather organization said winds on Tuesday and Wednesday likely won’t be as bad as they were on Friday. Expect 15 to 25 mph sustained wind with gusts around 35 mph, as compared to Friday’s gusts of nearly 60 mph.

The NWS forecast is still low-confidence at this time, meaning weather patterns could change before the impending storm. But the organization said on Monday morning that Philly could receive between 2 to 3 inches of snow on Wednesday. Northern counties could see between 6 inches to a foot of snow.