She got a $50 ticket — and crystal-clear video of the incident. 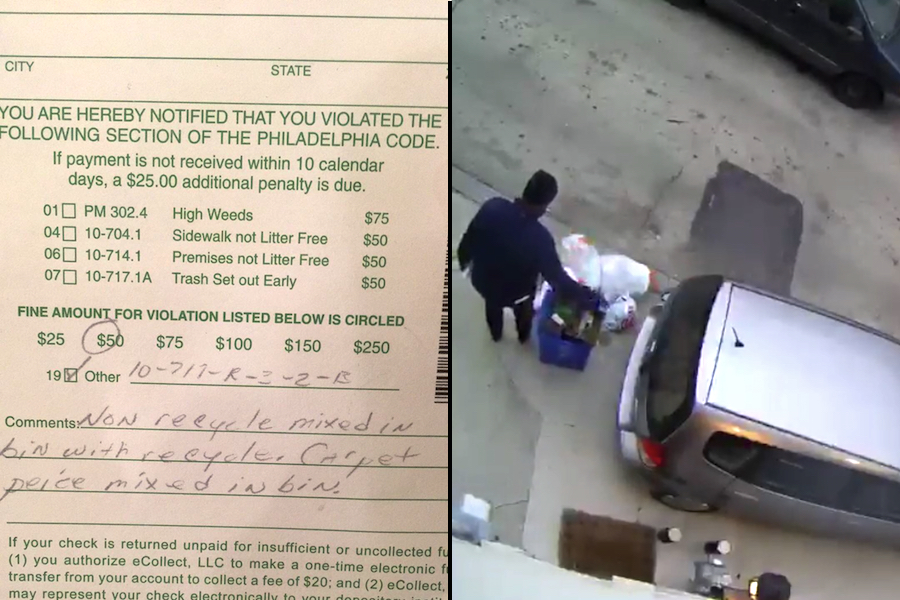 Left: The $50 ticket the South Philly woman found in her mailbox. Right: The questionable moment caught on tape.

Update: About an hour after we published this story, the city told us that it is voiding the ticket and investigating.

What is it with recycling scandals in Philly? It wasn’t so long ago that we showed you the video of the recycling truck worker accused of stealing a package just before Christmas. And now, we’ve got another recycling scandal a-brewin’.

It happened on Thursday morning around 7:30 a.m. on a street near Snyder Avenue. She asked us to withhold her name for fear of “retaliation.”

As you can see in the surveillance video above, the city employee puts the $50 ticket in her mailbox and then walks over to where the garbage and recycling bucket are in front of her house. He picks up an object — it’s one of those cat scratching rugs — that she says was on top of her garbage bags. Then, he places the object into her recycling bucket.

“Non recycle mixed in bin with recycling,” he wrote on the ticket. “Carpet peice [sic] mixed in bin.”

“I truly just feel upset,” the woman tells Philly Mag. “Myself and the neighborhood don’t deserve that. Fifty dollars goes a long way, you know?”

Plus, she says she’s concerned that he’s doing it to other people.

“I cringe so hard every time I look at the video,” she adds.

We reached out to City Hall and shared the video and the other information with officials.

Meanwhile, the city employee caught on the other video we mentioned is no longer working for the city. Score one point for the taxpayers, we guess.