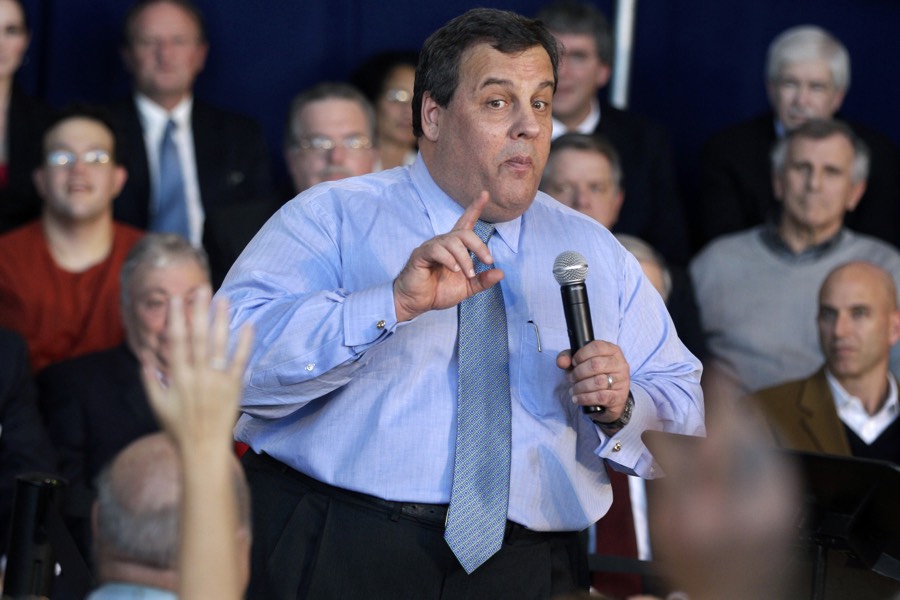 New Jersey Gov. Chris Christie warns a questioner to be brief as he addresses a large gathering in Voorhees, N.J., during a town hall meeting Wednesday, Jan. 18, 2012. (AP Photo/Mel Evans)

On Tuesday, new New Jersey governor Phil Murphy was sworn into office. Do you know what that means? Governor Chris Christie is toast. In honor of his dethroning, we thought we’d run through some of our favorite memories from his tumultuous eight years at the helm of the Garden State. Like, remember that time he embarrassed himself over Springsteen? (Sorry; we mean all those times.) How he whored himself to Donald Trump to snag the vice presidency,  or at least a plum cabinet post, and wound up with zip? That time he took his family to the beach? When he vetoed same-sex marriage? Called childhood vaccination a matter of “choice”? “Evolved” from an abortion pro-choicer to pro-lifer? Shared way too much about his and Mary Pat’s birth-control methods? Declared marijuana a “gateway drug”? Was a crappy-ass driver? Wasted millions of taxpayer dollars scheduling a special election for Frank Lautenberg’s Senate seat to avoid being on the same ballot as Cory Booker? Killed the Hudson River tunnel on false pretenses? Became Jersey’s least popular governor ever? And we haven’t even gotten to Bridgegate yet. Nor, for that matter, the greatest of all Christie’s sins: that time he said Eagles fans are “the worst in America.” How’re your precious Cowboys doing now, “Mr. Mojo”? Mmm-hmm, that’s right. Now go stand in line with the rest of the plebs at Newark International airport, you big putz.