The Unending Exhaustion of “Uncomfortable” Conversations About Race

A community event that placed white discomfort above the trauma of black and brown people was itself a textbook example of privilege. 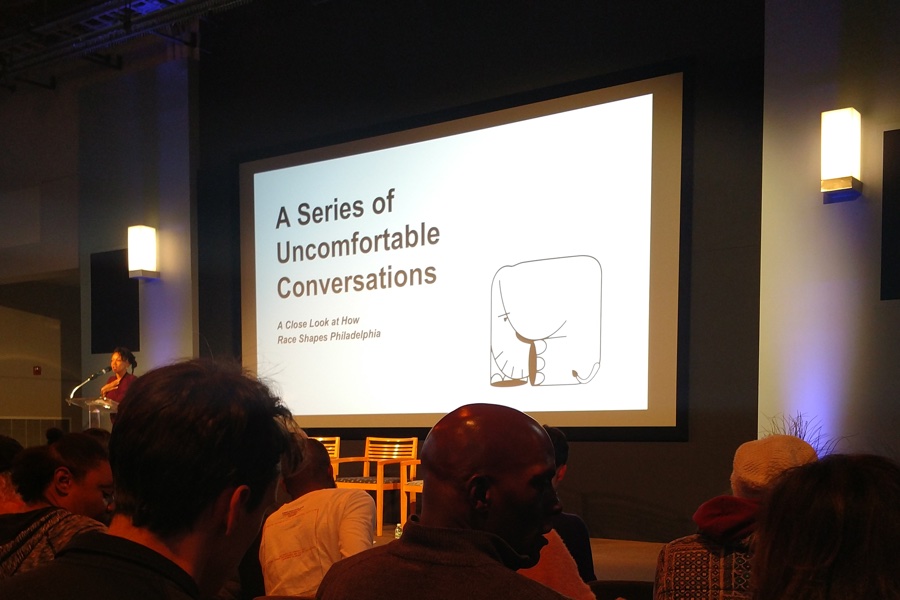 “A Series of Uncomfortable Conversations: Breaking the Myth of Meritocracy” at WHYY | Photo by Ernest Owens

I think my New Year’s resolution for 2018 will be to avoid putting myself in predictable predicaments. I arrived at this conclusion after I left another community-wide discussion on the topic of race in Philadelphia over the weekend.

This time around, I was seduced by the nuanced framing of the event, which gave me the impression that things would be different. Hosted by Little Giant Creative — a Philly marketing and branding agency founded and staffed by people of color — Next City, and WHYY, A Series of Uncomfortable Conversations: Breaking the Myth of Meritocracy was sold as an opportunity to “have real dialogue that works towards dismantling cycles that result from broken history, fostering greater understanding, and ultimately greater empathy.”

That didn’t happen. Instead, I walked away even more disenchanted with the idea that we can all collectively address racial disparities in a civil way. And I should have expected this, because the devil was already lying there in the details: Who were these “uncomfortable conversations” for, precisely? And who would have to endure another rehashing of trauma to make others in the room feel “uncomfortable?”

The event started off fairly productively. The impressively diverse audience of 100 or so listened intently as an all-black-and-brown panel spoke about local gentrification, inequity within public housing and education, segregation, and their combined impact on racial inequality in Philadelphia and beyond. There was no way to sugarcoat it — racism was at the root of redlining in Philadelphia, a practice that has led to racially disproportionate poverty levels in the city.

But as the panel discussion came to a close, I kept asking myself why any of these facts would be uncomfortable for me, a black man. As the Q&A portion opened up, I gave my thoughts on how these societal ills can be addressed only when white people with privilege give up some of their power, and how the marketing of this event as an “uncomfortable conversation” centered white guilt above the feelings of those of color in the room. A panelist agreed with most of my sentiments, but argued that the conversation can be uncomfortable for blacks who are “exhausted” by constantly having these kinds of talks.

It was a fair critique, although I would argue that being exhausted and being uncomfortable are different states. A white audience member who was next to ask the panel a question was about to prove my point.

Bill Clark, the former executive director of the anti-hunger nonprofit Philabundance, framed his question by stating that the issues affecting poverty aren’t necessarily about race, but class issues and “ignorant” decisions made by policymakers. He further implied that the back-and-forth “black vs. white” narrative of the event was “divisive” and wanted to know how can we move forward to address these issues without making it about race. The audience began to chatter, and a few groans could be heard throughout the room.

In other words, Clark was whitesplaining. The panel quickly rebutted that you can’t sincerely talk about social injustice and inequity in America without discussing race, and attempting to omit it from the discussion would get us nowhere. The room broke out in applause. Clark was visibly uncomfortable. I was infuriated.

It was at this moment I realized why I’m often frustrated with attending such conversations on race: The discomfort white people experience when challenged on their privilege is temporary at best, while the exhaustion people who look like me experience getting them there never ends.

Case in point: The reception after the panel felt like a petting zoo of emotional trauma being reframed as “insightful conversations.” Some white people came up to me and asked personal questions about racial injustices I’ve faced to get “a better picture of what’s going on,” while others tried to play devil’s advocate and argue that classism is the biggest issue of the day. An event that was billed as “uncomfortable conversations” was simply an exploitation of black and brown perspectives to coddle white people’s fragile sensitivity and issues with self-accountability. If two hours of black and brown scholars providing academic and legislative evidence that meritocracy is a myth and race is at the center of our disparities weren’t enough, then frankly I don’t see how cocktail conversations are going to make any of this better.

“There will soon be a reckoning,” one of the panelists said, on the day America will have “no other option but to confront its racist history.” I agree, and perhaps my exhaustion will end once the real battle — not “uncomfortable conversations” — of dismantling racism begins.