Why Opponents Say KOP Rail Is a Bad Idea

Running trains through people's backyards is no longer the main issue animating opposition to the line. 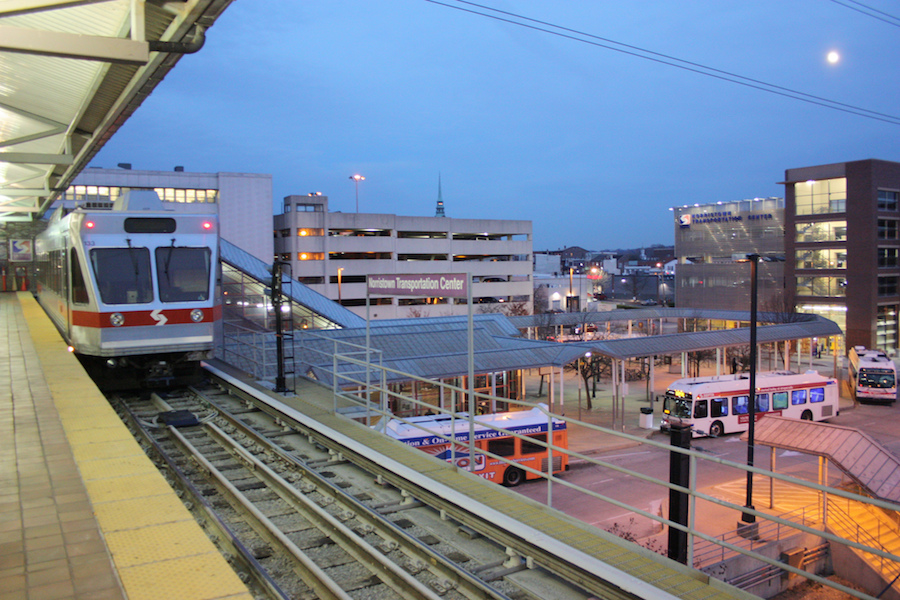 Dismissed as NIMBYs originally, the opponents of the KOP Rail project have developed some more substantive objections to it. | Photo: Montgomery County Planning Commission, licensed under CC-BY-SA-2.0

The No KOP Rail movement may have started when some King of Prussia residents noticed that the route SEPTA preferred for the Norristown High-Speed Line spur would literally run right through their backyards. But it has evolved into a substantive critique of the project, and its supporters both raise some valid questions and have offered some possible solutions. As fans and foes of the project prepare for the three public hearings on the rail proposal, we need to consider the arguments against it and weigh their merits.

Dan Cowhey, the chief voice of the opponents, wrote in with a detailed explanation of the objections:

It delivers no benefit to current King of Prussia residents who might want to use transit.

“I currently have to drive or take a bus to a station to use [rail transit], as the station is simply unwalkable for most in the area,” he writes. Even after the rail spur opens, he continues, that will still be the case thanks to both the location of the stations and the lack of pedestrian infrastructure in the area.

Sad to say, this criticism is accurate, but absent transformation of the area on a larger scale than is even now being contemplated, no rail service, not even the alternatives the opponents propose, will change the equation. And if the area is transformed in that fashion, the very characteristics Cowhey wants to preserve will likely disappear completely.

A secondary objection here has to do with paying for that pedestrian infrastructure. “The phrase ‘making KOP more walkable’ keeps coming up, but the problem with that is, the residents will have to foot the bill to build sidewalks, streetlights, walking bridges, etc., to service these stations,” he writes. “I can’t imagine that SEPTA or the KOP-BID will be using their funds for that.”

Perhaps not to Valley Forge Homes, they won’t, but the King of Prussia District is already spending money on its own to install pedestrian and bike paths along one of the main roads through the business park. Given that, it’s not too big a stretch of the imagination to see it spending more money to improve pedestrian access to the train stations if that is needed within its jurisdiction.

It won’t convert drivers into riders.

“Should the extension be built, it will reduce transit times for those who take the current bus lines out to KOP,” he writes. “However, we believe it won’t convert car drivers into transit riders.”

One reason why: The proposal won’t reduce transfers on the King of Prussia end. “[The proposal] sells how access to the city will be easier, when again for KOP residents it’s not — it will remain a three-seat ride into Center City at minimum,” he writes.

That’s actually one seat more than Cowhey would occupy under the best scenario at present. It’s also one seat more than many residents of North and South Philadelphia now occupy riding the bus from Center City. The travel time savings in both directions at peak hours should make current riders happy even with the additional transfer, but Cowhey’s question here remains a valid one: will it encourage anyone now behind the wheel to give up driving?

It will actually add to traffic congestion in KofP’s core.

Cowhey writes that since SEPTA plans to build park-and-ride stations, the rail spur will add cars to rather than subtract them from the heart of KofP. The draft environmental impact statement mentions one park-and-ride station at the end of the line, near the Valley Forge Casino Resort. Given this site’s proximity to Route 422, it may not exacerbate traffic on local roads as much as he fears — but it will make the area near the Route 422 interchange with First Avenue more congested. Intelligent siting of the garage and its connecting roads, however, should minimize the extra congestion.

It wasn’t thought through well in the first place.

Speaking of intelligent siting, Cowhey also doubted how well SEPTA had studied the line based on its own ignorance of the effect its proposed route would have on his subdivision. As noted before, it took a county legislator guiding SEPTA staff by the hand through the subdivision to get the agency to revise the line’s alignment. And that misstep is related to another one:

It misses the type of development it’s supposed to reinforce.

“SEPTA’s selling point of this extension is seemingly how it will service the new Village/Town Center and Valley Forge National Park, when the train will not go near either area,” he writes.

This is the one major oversight of the proposal: it does miss the key piece of the area’s urbanity retrofit. But SEPTA can alter local bus service in the area to better connect the Village and its environs with the rail spur.

It could also do that to connect the area with Regional Rail, however. And Cowhey writes that this is something the opponents would be willing to support: “Many feel that an extension of Regional Rail is what would be accepted.” But what extension, and where? SEPTA is at present unwilling to consider returning service to non-electrified territory, which rules out putting the station at Valley Forge Park back into service. What’s more, Norfolk Southern, the freight railroad that controls the rail lines that run closer to King of Prussia, has been cool to the idea of sharing its tracks with local passenger rail elsewhere. It’s no more likely to warm up to the notion here.

The best Regional Rail-based solution would turn the buses now running from Center City into extensions of the Manayunk/Norristown and Paoli/Thorndale lines, akin to the shuttle bus that currently connects the business park and mall with Wayne station via a meandering route. Again, however, that would make life easier for city residents but not necessarily the suburbanites. A possible second alternative would be a “BRT-lite”-style line that would stop at the major shopping and employment centers, including Chesterbrook, on its way between Norristown Transportation Center and Wayne Station.

The cost will matter, however.

We all may want to keep these options in mind, as the matter of paying for the rail spur remains up in the air. Should Federal grant funding disappear, the entire project will likely have to be scrubbed or put on indefinite hold, and even with grant funding, $500 million is still a good chunk of change to raise locally. Revamped bus service would cost a fraction of that amount.

But then we would most likely not get the redevelopment benefit. We can argue whether that benefit is large enough to make it worth spending a billion dollars, but without some sort of fixed transit facility, it won’t be there at all. And — as Cowhey recognizes — this proposal is really about the future shape of King of Prussia.