The Unpatriotic Cynicism of the NFL’s Salute to Service

Making a spectacle of soldiers while restricting the speech of those protesting police brutality is the true definition of disrespecting their service. 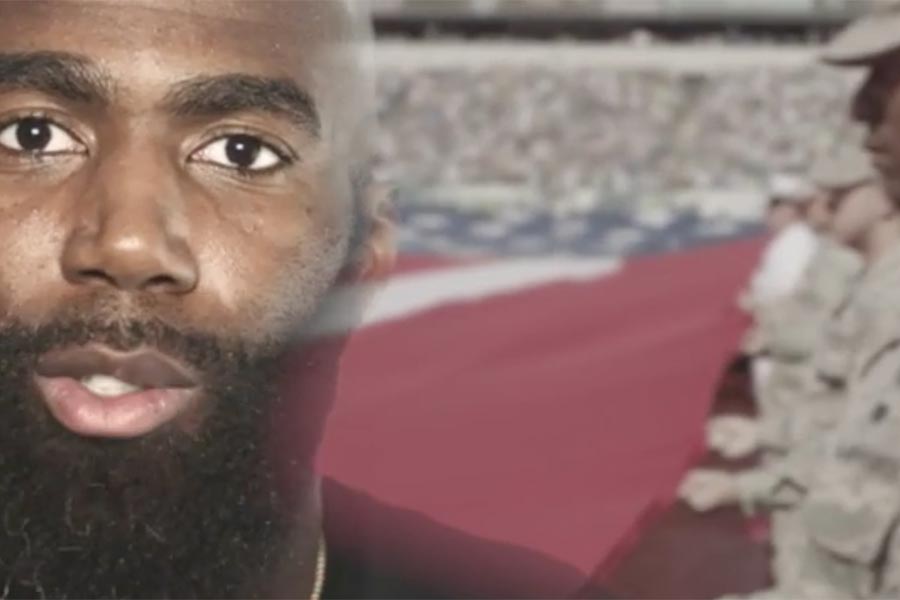 A screencap of Philadelphia Eagle Malcolm Jenkins from an NFL promo video.

If you’re among the Philadelphians who view watching an Eagles game the same way some folks view breathing, you know that this is Salute To Service Month in the NFL.

If you’re not into camouflage, you might want to find something else to watch, because for the next few weeks, the NFL will be awash in it.

The NFL will be bringing soldiers to games and contributing to veteran-related causes. Now that Veterans Day is here, there will be a lot of talk about sacrifice, gratitude, and, most important, patriotism.

In fact, I need to thank the NFL for having Salute to Service Month, because it gives me a chance to talk about patriotism and why the NFL and its owners, advertisers, and especially fans might need a crash course in what it means.

In other words, it’s time that the NFL universe learned that these soldiers you’re going to try and honor this month didn’t fight for a piece of cloth or the reworked bar ditty that became our national anthem. They fought for an idea, an idea that hasn’t been applied equally to all.

And despite the demands of NFL fans and folks like Dallas Cowboys owner Jerry Jones and Papa John’s CEO John Schnatter that NFL players ignore this reality, the freedom to point it out and demand change is enshrined in the Constitution, which is what they were actually defending.

Now unless you’ve been hiding in a cave that wasn’t tricked out like the one Osama Bin Laden allegedly spent his last days living in, you know that the NFL has been free speech’s Ground Zero for the last two years. It’s a discussion that former San Francisco 49ers quarterback Colin Kaepernick got started by taking a knee during the National Anthem to protest police brutality and police shootings of unarmed Black men, and to call for criminal justice reform.

But rather than focus on the issues being protested, all of which could affect the mostly Black athletes who play in the NFL, folks chose to focus on the method of protest. Especially when players on multiple teams either started taking a knee (Michael Bennett of the Seattle Seahawks and Cleveland Browns tight-end Seth DeValve, a White player) or raising a fist (like Philadelphia Eagles safety Malcolm Jenkins) during the anthem.

That riled up the nation’s armchair patriots, especially the nation’s Armchair Patriot in Chief, President Donald Trump. They demanded a pound of flesh from both Kaepernick (he’s currently without a team) and the league despite the fact that the idea to kneel came from an actual Green Beret (former NFL long-snapper Nate Boyer).

When the Armchair Patriot in Chief took to Twitter to denounce the protests, NFL owners, many of whom bankrolled his inauguration, promptly freaked out. Folks like Jones and Schnatter called for NFL commissioner Roger Goodell to force the players to stand for the anthem.

And I won’t even get into what Houston Texans owner Bob McNair said out loud. When he made his whole “Inmates running the asylum” comment, I was given confirmation that irony is not dead.

As a self-proclaimed “Constitution nerd,” I’ve been following this with a fairly intense interest. As far as I’m concerned, the First Amendment came down on stone tablets from Mount Sinai.

But as a military brat, the fact that the NFL, the Armchair Patriot in Chief, and a bunch of misguided advertisers and fans want to use the military as a cudgel to beat folks into silence sends me into a white-hot rage.

For those of you who don’t know what a “military brat” is, that’s someone who was born into a military family. I was born in what used to be the Walson Army Hospital on what used to be Fort Dix (now it’s Joint Base Dix/McGuire/Lakehurst) in New Jersey.

My father was in the Army for 32 years, serving in almost every armed conflict America participated in last century. Despite America showing him more than once that it didn’t always value him as a Black soldier, he fought for the idea of America enshrined in the Constitution.

Not the flag. Not the anthem. The idea.

To me, it takes a special kind of nerve to make a spectacle of soldiers while silencing protest when you’re a bunch of spoiled billionaires and a nation led by a draft dodger that’s never taken care of them properly in the first place.

Silencing people in the name of patriotism is the textbook definition of disrespecting the troops. And for a league that’s chosen to wrap itself in the flag, it’s a bad look.

Think about that as you Salute Their Service.

Denise Clay has been a journalist for more than 25 years, covering politics, education and everything in between. Her work regularly appears in the Philadelphia Sunday Sun and the Philadelphia Public Record, and she is also on WURD Radio’s “Wake Up With WURD” daily with Mark Kelly Tyler. Her work has also appeared on the BBC, XO Jane and Time.com.