Scott Wagner said he felt "emboldened" after a two-hour plane ride with Bannon. 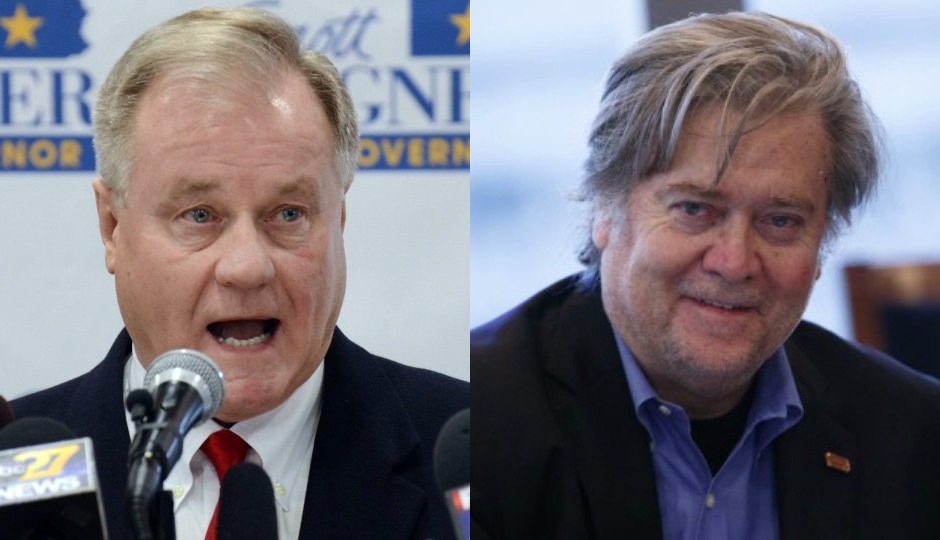 Wagner, the York Republican who said that “warm bodies” cause climate change, chatted with Bannon on the way to St. Louis for a gathering of the Phyllis Schlafly Eagles, a “pro-family” interest group that opposes “feminist goals,” “political correctness” and gay marriage, among other things.

According the Pittsburgh Post-Gazette, Wagner said at the meeting that he was “pretty emboldened” before his plane ride with Bannon, but that “right now I’m like 500 percent more emboldened.”

“You’re going to have to go and take [the country] back,” Bannon said, according to the Post-Gazette. “And we’re going to start taking it back … in November when Scott Wagner runs in Pennsylvania.”

Speaking now: @gatewaypundit, on the mainstream media. Steve Bannon has been ushered into the room. pic.twitter.com/3ZDr6CZQ20

Bannon and Wagner reportedly criticized both Democrats and Republicans at the gathering, with Bannon relaying Wagner’s claim that Republicans are “giving [Pa. Gov. Tom Wolf] a free pass, and you know what? Enough is enough.”

Pa. Dems jumped on the endorsement, claiming Bannon “has been plotting a coordinated attack on Republican establishment candidates and Scott Wagner’s anti-Semitic, white nationalist and pro-Trump views, as well as his extremist positions on health care and women’s rights, are fully in line with Bannon’s agenda.”

Wolf used it as a fundraising opportunity.

Send a message that PA won't tolerate candidates for governor who pal around with racists like Bannon — donate: https://t.co/tygwbTwgDK pic.twitter.com/QPzRYvwnqk

Wagner’s campaign manager, Jason High, responded to the criticism with the following statement, via PoliticsPA:

“I think the PA Dems should spend less time worrying about who is supporting Scott and more time worrying about what a failed governor Tom Wolf is. Pennsylvania state government is falling apart all around Gov. Wolf. And all he and his cronies in the Democrat (sic) Party want to talk about are national issues.”