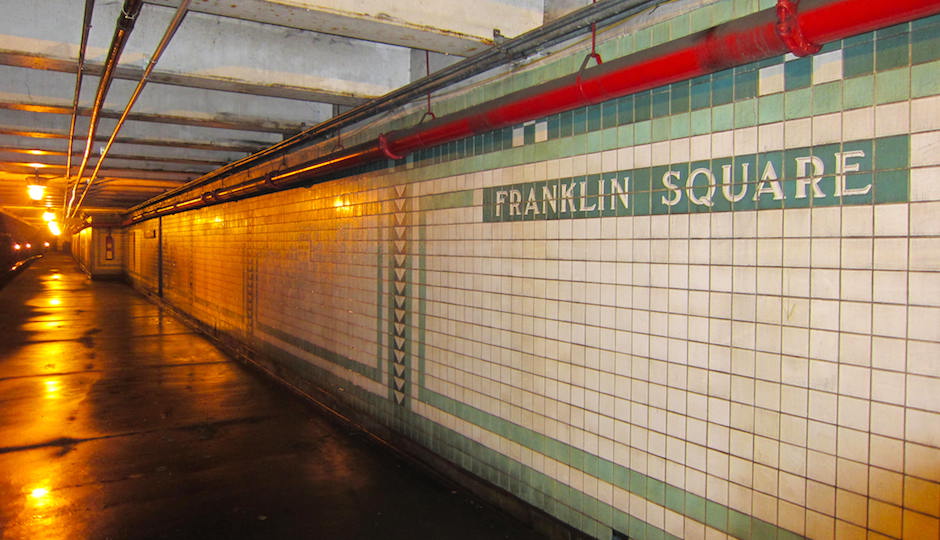 Beneath the depths of Franklin Square sits an idle PATCO station which last saw customers walk through its turnstiles in 1979 – the same year that ESPN launched and Michael Jackson released his breakthrough solo album, Off the Wall. The station at 6th and Race streets has an interesting history of operation: It opened in 1936 as part of (SEPTA predecessor) Philadelphia Rapid Transit’s Bridge Line service, but closed in 1939 due to inactivity. It then was revived for stints from 1943-1946, 1952-1953 and then finally 1976-1979 as a PATCO stop.

On Wednesday, members of the Delaware River Port Authority’s board of commissioners approved a two-year contract with Burns Engineering, Inc. that sets in motion the transit agency’s plans to revitalize the long-abandoned Franklin Square station. The deal stipulates that the engineering firm will receive a little over $2 million from the DRPA to plan out what it will take to return the station to fully operational.

“This will be telling us what we need to do, what the design would be, the basis for a construction contract if we decide to go forward,” DRPA CEO John Hanson told Philly.com.

DRPA Chief Engineer Michael Venuto said at the meeting that the project would “address improvements to the station’s structural, civil, mechanical and electrical systems and will provide access in compliance with the Americans with Disabilities Act (ADA).” Keep in mind that safety and accessibility changes made since the 1970s will need to be taken into consideration in the authority’s review of Burns Engineering’s designs.

Hanson said that while opening Franklin Square station is a priority for the DRPA, the project’s ultimate approval remains up in the air. The board of commissioners will make a final determination after the engineering firm submits its report. The DRPA expects to spend between $27 million and $28 million to bring the station back up to running condition. Keeping the station open would cost an additional $800,000 annually.

You can check out some eerie photos of PATCO’s “ghost” station here.