OPINION: The Rizzo Statue Should Stand as a Monument to Human Imperfection

Most of the protesters were not alive during the Rizzo years — they never saw the evolving human being underneath the surface sins. 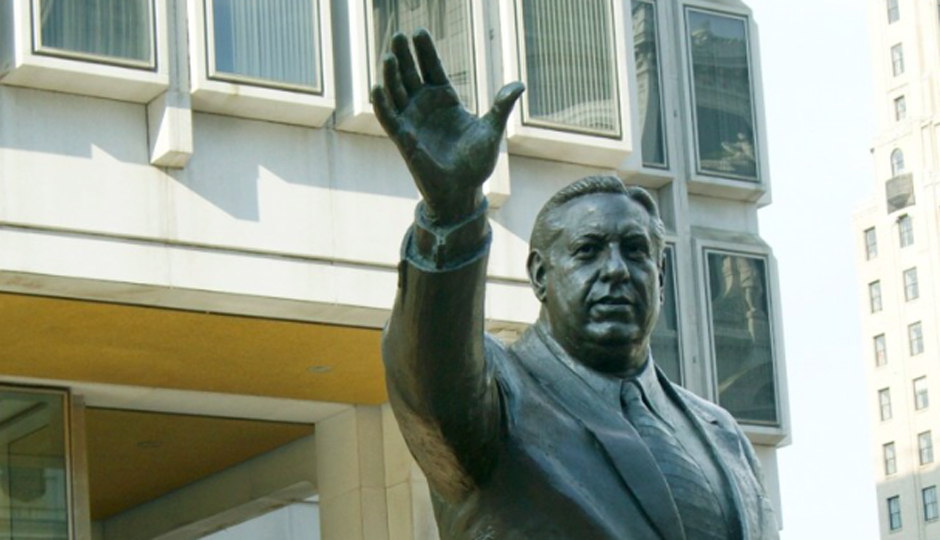 One cannot look at the Frank Rizzo statue in front of the Municipal Services Building without catching a glimpse of the nearby Jacques Lipchitz sculpture, Government of the People.

The 30-foot-high Lipchitz sculpture was commissioned by the City of Philadelphia, but when a plastic model of the proposed work was unveiled by the Art Commission, then Mayor Frank Rizzo called it “a load of dumped plaster” and immediately cut off funding for its completion. Lipchitz died without ever seeing his sculpture mounted. Funds for the completion of the statue were raised by the Association for Public Art in time for the 1976 Bicentennial.

Rizzo learned to live with the statue, although in interviews he often made references to how the “load of plaster” ruined his view of the city from City Hall. At no point did he call for its destruction, unlike the millennial protesters who want the 10,000-pound Rizzo statue moved to a warehouse or melted down into manhole covers. Of course, most of these people were not alive during the Rizzo years, so the Rizzo they know is an archival symbol of racism and homophobia. They never saw the evolving human being underneath the surface sins.

As a young journalist and activist in the 1970s, I loathed Rizzo. I recall a night in Center City when I was ordered into the back of a wagon because police were looking for a suspect with red hair. I joined ten other redheads at the Roundhouse, where we were placed into a lineup, staring at a one-way mirror knowing that on the other side a number of people were determining our fate. When it was over, we were offered us no apology, just a curt “You can leave now.” And find your own way home, of course.

Sometime later I was hanging out with friends on a Center City stoop when another police wagon zipped by and ordered me inside. In the van 10 or 15 gay men were singing “We Shall Overcome” while trying to make sense of what just happened. A tiny screened slat allowed us to see the officers in the front of the van. We saw them point to people in the street and say, “Get that one!”

After a night in jail, we were herded before a judge and a gallery of spectators. Laughter and derision preceded the judge’s dismissal of the charges. We were free to go, but why were we detained in the first place?

Blame it on Rizzo.

When Councilwoman Helen Gym called for the removal of the Rizzo statue because it is “not [a] permanent testament to fixed history,” I remembered my personal interview with the man in 1991. The 40 minutes that I spent with the former mayor went by very quickly. He told me about a gay police officer friend of his with AIDS whom he had visited in the hospital. He mentioned his concern for children with mental retardation and how he loathed that term because of its demeaning label. He invited me to lunch and gave me his personal telephone number. Where had the monster gone? I left the interview convinced that he had turned over a new leaf, and I felt much of my “hatred” evaporate.

All of which brings me back to the gymnastic grandstanding of a politician like Helen Gym, whose ultimate aim is to become the city’s first woman mayor. Gym has no clue about the quirky nature of real Philadelphians, because she’s an ideological purist. The Seattle import doesn’t understand that Philadelphia has always had a grudging tolerance for eccentric habits and bad ideas. That’s why real Philadelphians can look at the Rizzo statue and say, “He was impossible and he made bad decisions, but he had a heart,” and then leave it at that, allowing the statue to stand as a testament to universal human imperfection.