Janine Humphrey, who found her car spray-painted with slurs on Tuesday, says 24-year-old George Rissell lives right down the road from her. 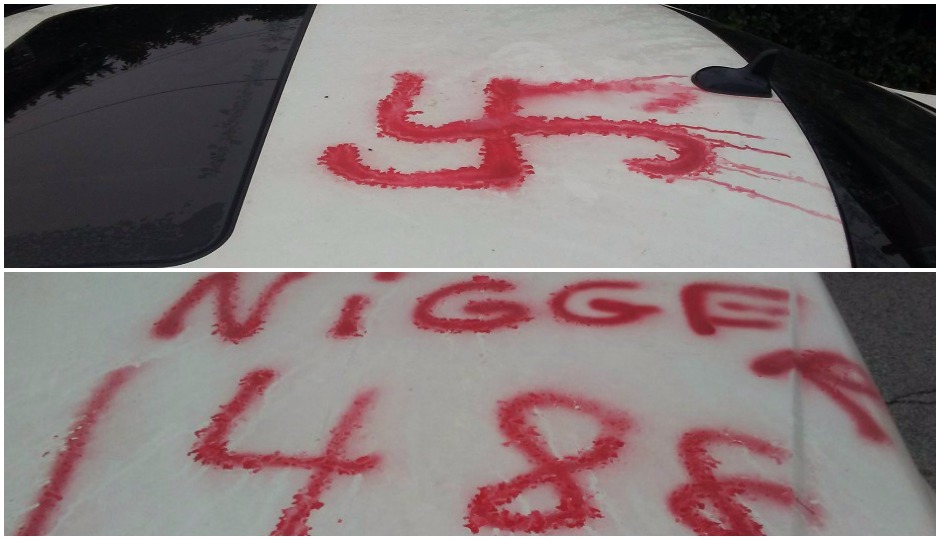 Coatesville police have arrested a suspect in connection to racist and anti-Semitic vandalism discovered in several locations in Chester County.

George Rissell, 24, of Coatesville, was taken into custody late Wednesday night. He has been charged with multiple counts of ethnic intimidation and criminal mischief.

Rissell’s arrest comes after swastikas, the N-word and other disturbing graffiti was spray-painted on a convenience store, a Mercedes Benz and a garage door early Tuesday morning, according to police.

Resident Janine Humphrey found the N-word and “14:88” (a reference to white supremacy) spray-painted in red on her Mercedes Benz around 8 a.m. Tuesday morning. She posted photos of the vandalism to Facebook.

Humphrey, who is black and just moved from Berks County to Coatesville, where her husband grew up, said she was relieved that police made an arrest so quickly. She said Rissell lives just down the road from her – which she finds “very scary.”

“I thank god that my family was in the home sleeping when this happened,” Humphrey said. “I’m so thankful that it was just a vehicle.”

Humphrey said she’s received an outpouring of support, including from a vehicle repair company that offered to clean her car free of charge.

“I didn’t think it would spread as it quickly as it did and have such an impact of everyone of all different ethnicities,” Humphrey said. “It was nice to see that other people were just as disgusted as I was.”

Rissell has claimed associations with white supremacy groups, according to police. Officials say he vandalized five locations within the city and three locations outside the city, in Valley Township. Police say they used security footage to find him. He was arraigned on Wednesday night and remains in custody in lieu of $150,000 cash bail.

The incident, which comes less than two weeks after white supremacists and neo-Nazis spurred violence at a rally in Charlottesville, Va., has shocked the community.

Pa. State Rep. Harry Lewis, who represents the 74th District, said on Wednesday that it “breaks my heart that we still have to fight for equality and against hatred.”

“As the first African-American legislator in Chester County, I won’t stop,” Lewis said in a statement. “Our community has come too far to stop fighting. We’ve broken too many barriers. To the criminals who vandalized private property and thought they can set our community back, we won’t tolerate the hatred.”

Pa. State Sen. Andy Dinniman said in a statement that there “is absolutely no room for this kind of hate in our communities. Not now. Not here in Chester County. Not anywhere.”