All you need to take part in the celestial phenomenon is five minutes and some household junk. 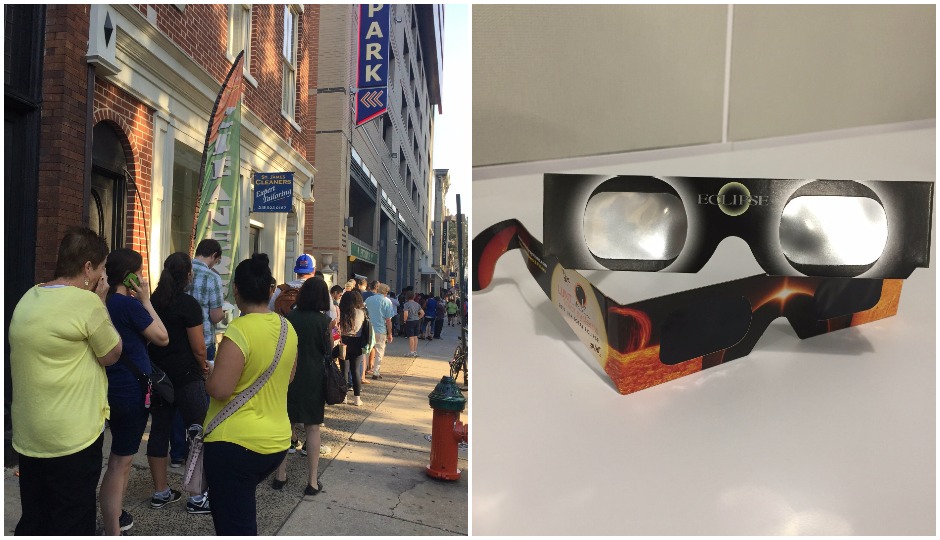 L: The line for eclipse glasses outside Wills Eye Hospital on Monday morning.

Maybe you planned ahead and got some coveted eclipse glasses weeks ago. Maybe you got lucky and landed a free pair last minute (like the hundreds of people who lined up outside Wills Eye Hospital in Washington Square West to snag some on Monday morning).

But chances are you’ve procrastinated, and now you’re empty-handed, with no way to defend your eyes from the sun’s partially-covered rays. If that’s the case, we’ve got a state-of-the-art solution for you, and it consists of a bunch of junk you’ve probably got lying around at home: heavy paper (like poster paper of sorts), aluminum foil, scissors, tape, and a paper clip.

The Franklin Institute (which will hold a kick-ass eclipse party featuring a limited number of glasses) released a handy last-minute guide to making a “pinhole camera” solar viewing device. It sounds a bit complex, but it actually just resembles the type of paper cut-out projects you make in elementary school.

The organization details how to make the pinhole camera on its website (photos included), but it pretty much just involves cutting a square of tin foil, cutting a slightly smaller hole in the center of your poster paper, taping the foil over the hole and using the paper clip (or some other small pin-like thing) to poke a hole in the foil. Then you can observe the sun by putting a piece of plain white paper in the shadow of the foil. Ta-da!

Need a way to view the coming solar eclipse? @NASA shows you here how to make a simple pinhole camera https://t.co/v1sC7B4F4T pic.twitter.com/d26rgXKZv7

If you’re not particularly crafty or if that process sounds headache-inducing, consider trying your luck at the Science Center at 3711 Market Street in University City, which will give out glasses at 1:30 p.m. on Monday as part of an eclipse event. But but warned: it’s probably a much better idea to make the pinhole camera – the glasses at the Science Center will go extremely fast. A spokesperson said they’re limited.