The city fenced in the statue on Wednesday morning – but it was no match for the eggs. 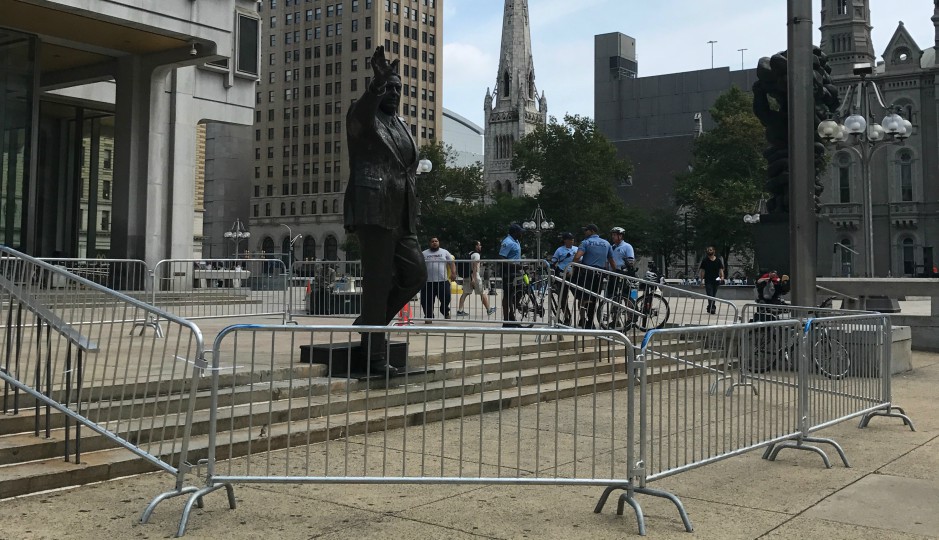 Philly police arrested a man who hurled eggs at the Frank Rizzo statue on Wednesday morning.

According to 6ABC, the incident occurred around 10:40 a.m., shortly after the city fenced in the controversial statue. The news organization posted a video of the man throwing the eggs and running away.

Man throws eggs at Frank Rizzo statue near City Hall and runs off. Was just chased down and arrested by police. @6abc pic.twitter.com/cqOooeVgnw

Police officers who were standing nearby reportedly chased the man and took him into custody. His identity – and whether or not he’ll face any charges – remains unclear.

The statue’s presence outside City Hall has come under renewed fire following the violence in Charlottesville this past weekend, which was prompted by white supremacists who were fighting to preserve a Confederate statue.

On Monday, Councilwoman Helen Gym called for the city to take down the Rizzo monument.

All around the country, we're fighting to remove the monuments to slavery & racism. Philly, we have work to do. Take the Rizzo statue down.

Gym and others opposed to the statue cite Rizzo’s brutish policing of people of color and contentious relationship with the gay community. City spokesperson Lauren Hitt said in a statement on Tuesday that “now is the right time” to discuss the statue’s removal.

On Tuesday, Black Lives Matter Pennsylvania activist Asa Khalif told PhillyVoice that he and others plan to tear the statue down if officials don’t move fast enough.

“If politicians refuse [to make it happen quickly], we are going to grab some rope and tear that f***ing statue down ourselves,” he told the publication. “Either the politicians do it or we will.”

His statement comes days after activists toppled a Confederate statue in Durham, N.C.

It’s not the first time someone has vandalized a Rizzo monument – the Rizzo mural at the Italian Market has seen its fair share of paint and graffiti.