OPINION: White People, Only You Can Stop the Next Charlottesville

Owens: People of color have been coming together for centuries to tackle racism. It’s time for white people to show up — and own up. 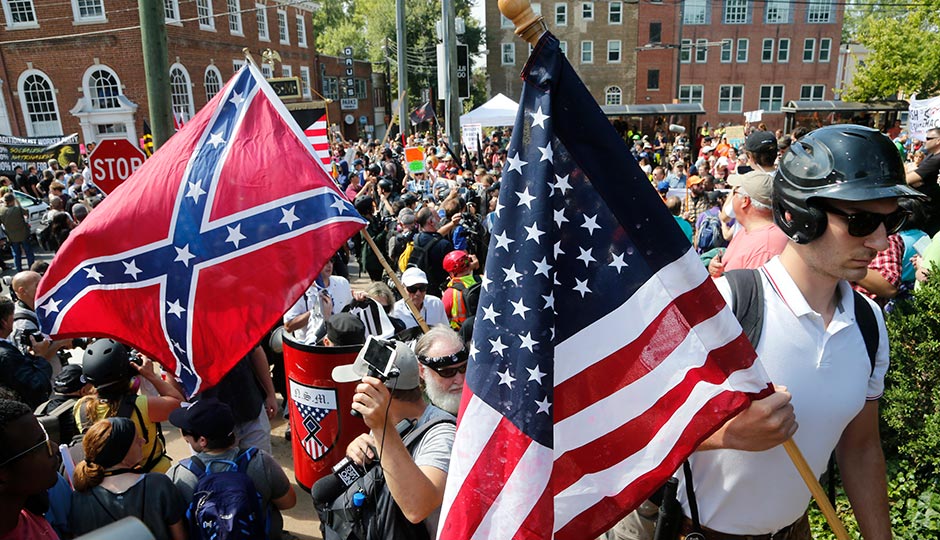 The moment I came out of the womb, I already had two strikes against me: being black and gay in a nation that continues to systemically oppress both aspects of my identity. I am expected to function as a productive citizen while experiencing a daily onslaught of discrimination and microaggressions — and added to this personal and social distress is the burden of having always to defend my community: When one black person deviates, we are all held accountable.

When news broke that a woman had died and dozens of others were injured during a neo-Nazi, neo-Confederate, Ku Klux Klan–filled protest in Charlottesville, Virginia, this weekend, I was numb and didn’t cry. It was yet another example of white supremacy rearing its ugly head. To be black in America is to be able to predict such senseless acts of bigotry when there’s no moderating force. Of course Donald Trump did not immediately denounce white supremacy, because the core demographic espousing such an ideology endorsed his presidency.

Meanwhile, white folks outside the Oval Office have collectively remained silent and passive in the face of the renewed visibility of white supremacy and hatred in America. When former KKK leader David Duke issued that endorsement, the only thing that most whites needed to “move on” from its blatant threat of racial discord was Trump being forced in interviews to publicly disavow it. People of color, on the other hand, knew this would only be the beginning.

As I reflect on this, I am reminded of the many times the black community could not run away from accountability for those who set us back. In 1986, it was Willie Horton whom white folks used as an excuse to fear black people: The convicted felon’s acts of assault, armed robbery, and rape committed after he skipped out on a weekend furlough from a life sentence he was already serving led to George H.W. Bush campaigning to stop such “weekend passes” for all inmates. More years and many examples of blacks acting badly (such as O.J. Simpson, the D.C. snipers, and the red herring of “black-on-black crime”) would further place the burden on our community to address these issues in our defense. Whether it was through the NAACP or now Black Lives Matter, black people have always been expected to answer for the actions of members within their community.

But when it comes to white people — and no, there will be no “not all white people” exemptions here; such exemptions are never granted to people of color – accountability is as much of an illusion as their presumption that America is a post-racial society. Since the white terrorism of Charlottesville, many “well-meaning” white folks on social media have again distanced themselves from those like them who carry racist beliefs. As #ThisIsNotUs trends worldwide on Twitter, I laugh to keep from knocking my laptop down in disgust. Messages such as “we must come together” show me exactly how not-well-meaning these white people actually are.

Newsflash: People of color have been coming together for centuries to survive and combat racism caused by white supremacy. The only people who haven’t been fully on board with this “come together” sentiment are whites who continue to cry “not all white people” every time they fear being singled out.

To these white people who claim to care: It’s finally your turn to get your ass up and fight back against the detrimental folks in your community trying to terrorize us all.

There are no nicer words or inspirational Martin Luther King Jr. quotes that I can use any longer to encourage you to step up — PEOPLE ARE NOW BEING KILLED TRYING TO FIGHT OFF NAZIS IN AMERICA IN 2017. WAKE. THE. FUCK. UP.

It’s not about your personal feelings, beliefs on civil discourse, or anything your white privilege shields you from, but about finally admitting that as a community you all have a debt to society that needs to be paid off immediately. Let’s stop pretending like we don’t know how we got to this point: It wasn’t just the latest Election Day, but more like the first Columbus Day and all the centuries that followed. For those of you who still want to tell people of color to “let it go, it was the past,” how about you read the news more? There’s no need for me to press the rewind button on this nation’s tumultuous history when you currently have a president who has made it his mission to “Make America Great Again” for those who thought it was “great” back then.

No, I’m not here to give solutions and another bold plan of action — methods that will probably just lead to debate overkill and be ignored anyway. This is your problem. People of color have already spent too much emotional, physical, and intellectual labor trying to whip white folks into shape — those days are now over. I am more invested in the personal safety of people of color who are targeted by these acts of terrorism daily rather than of those who are privileged to stand idly by. It’s high time white people strategize among themselves on how they plan to tackle racism, just as people of color found ways to do so without them.

Strategizing means not asking people of color for all the answers or simply announcing that you’re not a racist. It’s showing more than telling; it’s acting, not reacting. This is not the time for performative activism — one that’s about making cheap symbolic gestures and catchy remarks to center yourself instead of the issue. It is time to get out of comfort zones and coddled spaces — places others more marginalized have yet to be allowed into.

In short, stop being white people who don’t just give a damn — do something, and act before it’s too late.