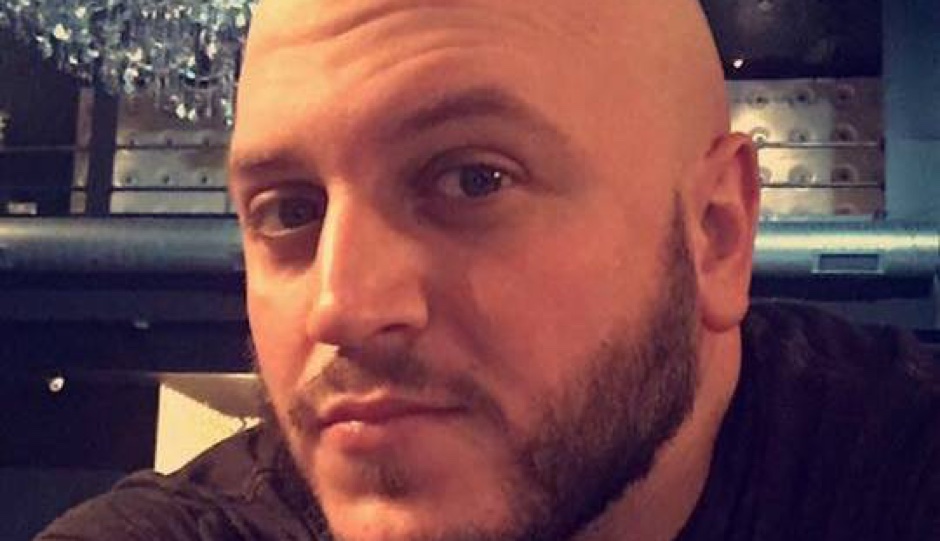 After Tabu Lounge and Bar announced recently that it was parting ways with well-known Gayborhood events producer Josh Schonewolf, speculation arose on social media that the split had been sparked by his allegedly poor performer payment practices. Schonewolf has now exclusively given G Philly his side of the story.

A staple in the Gayborhood, Schonewolf has produced popular events such as “Mr. Everything,” “Bearlesque,” and “Daddy & Friends” through his promotions company, Josh Schonewolf Presents. Tabu was one of Schonewolf’s recurring venues and became his mainstay after he cut ties with ICandy following its owner’s racial slur controversy in 2016.

Concerns about Schonewolf’s financial practices were first aired publicly in May in a Facebook post by DJ Sharyn Stone, which referenced “doing numerous paid gigs with Josh Schonewolf and not getting paid or not being paid what he agreed on.”

“I worked three events for him,” Stone explained in an interview on Friday. “The first two, I did not get paid what we agreed, and the last, I literally walked into an empty room and was expected to turn the lights on and set the venue up. He arrived late and gave me attitude for not knowing how to put together a sound system that was thrown into multiple Tupperware containers. I DJ — I am more than happy to do sound and lights, but I’m not going to set up the entire event with no heads up or additional money. … I walked out and we argued via text, then that was it.

“I spoke out about him a few times since when I heard of other people being taken advantage of. These are young gay and trans people he is using — it was disgusting. I couldn’t not say something.”

Then, on July 11th, Tabu made a post on its official Facebook page explaining to patrons that they “do not hold money for, pay money to, or subsidize other promoters so they can pay their performers.” In the post, the venue did not mention any producer by name, but did say that “if someone is telling this information, they are lying to you”: 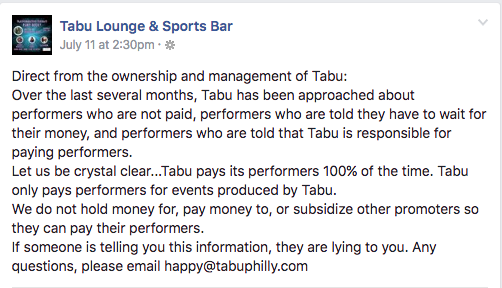 “I was given the runaround numerous times by Josh when it came to paying me for my services, and I had to reach out to Tabu to see if they could intervene in the matter,” said one performer who has participated in multiple Schonewolf events and requested not to be named. “Tabu told me they aren’t responsible for what producers promise and that I should take up the issue with him. … I just finally got paid after weeks of excuses.”

Tabu announced officially on August 1st that it had cut ties with Schonewolf following complaints surrounding the finale of his latest “Mr. Everything” competition: 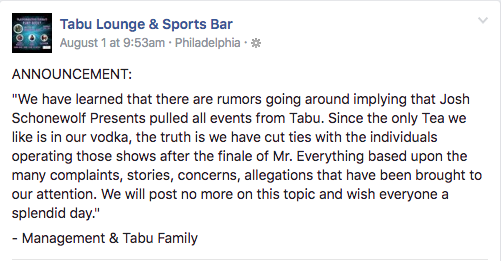 When reached by G Philly for comment about his payment practices and Tabu’s Facebook posts, Schonewolf did not address any specific allegations but did send the following statement admitting that he had been “untimely” with payments to his performers:

“As a producer I have tried to give as many performers opportunities as possible. Unfortunately by doing this I allowed the financial obligations of my events to exceed my ability to pay in a timely manner. My relationship with Tabu has become untenable because of my untimely payment to performers.

“I respect that there is a negative sentiment in regards to me and my events due to these actions. All of this has forced me to reevaluate the amount that I produce and to devise financial strategies to never be in this position again. I acknowledge that my prior actions showed a lack of business judgement and deeply apologize to anyone that may have been negatively impacted. I understand Tabu’s position and leave our business relationship wishing them nothing but continued prosperity and hope that with time they can do the same.”