OPINION: The Ben Franklin Bridge Climbers and the Pursuit of “Art”

How did it never occur to these daredevils that they might be mistaken for terrorists? 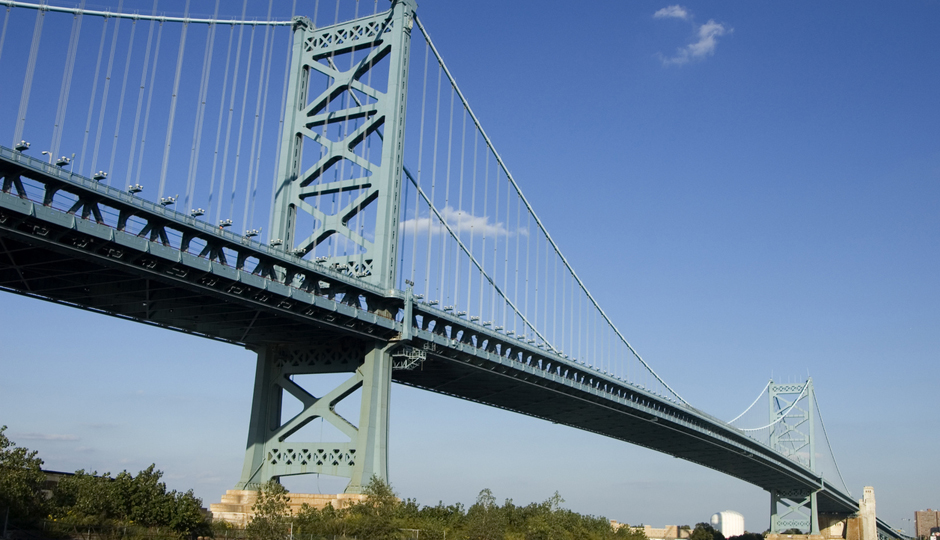 Two young men dressed all in black climbed to the top of the Ben Franklin Bridge last week, and the people down below wanted to know what was going on. Were they jumpers, terrorists, or black-masked Antifa members up to no good? Or were they just nincompoop graffiti artists on an adolescent tagging expedition? (The news media, for a hot five minutes, assumed the pair was following in the footsteps of Cornbread, the city’s most notorious tagger).

When it was discovered that these climbing man-boys were in fact photographers (America’s most popular hobby, by the way), every photographer in the city no doubt remembered a time when they had crossed a line or two in the name of photography.

Charles Van Schaik must have seemed extraordinarily creepy in the late 19th century when he went around photographing dead people in their caskets; his compilation of corpses would later be published as The Wisconsin Death Trip. Philadelphia’s own Thomas Eakins never climbed a bridge to photograph nature, but he snapped nude pictures of his family and his male and female students, an act that contributed to his expulsion from the Pennsylvania Academy of the Fine Arts and that in 2017 would put him on Megan’s List. Zoe Strauss, another Philadelphian, sold her Diane Arbus–evoking epic narrative images for nine long years under an I-95 highway overpass in South Philadelphia for five dollars a shot. Did the line that Strauss possibly crossed include violating an obscure city tax law or vendor’s license requirement?

“Some people’s photography is an art,” photographer Helmut Newton said. “Not mine. Art is a dirty word in photography. All this fine art crap is killing it already.”

This thought might have been on the minds of the two Ben Franklin Bridge climbers. Andrew Lillibridge, 20, from Toledo, Ohio, had previously posted photos of himself standing precariously atop tall buildings in Detroit. The other guy, Martin J. Romero-Clark, described himself as a fashion, portrait, wedding and landscape photographer. Presumably the duo just wanted to snap a few aerial views of the city, although one wonders whether they also had their eye on tagging the tower after putting away their cameras, just as people in the 1800s carved their initials into the trunks of trees “to mark the spot.”

But Lillibridge and Clark were really following a different path than the standard photos we usually see in museums, such as Nan Goldin’s work that concentrates on the people she knew in New York who later died of AIDS. Or Robert Mapplethorpe’s photography of sexually explicit S&M bondage scenes, or David Wojnarowicz’s sacrilegious images, or even Michael Nichols’s amazing National Geographic wildlife photos now on exhibit at the Philadelphia Museum of Art.

Our bridge-climbing bozos were following in the footsteps of the Russian photography school of rooftopping, a craze that has taken Moscow and towns like Vladivostok by storm. If ever there was a case of Russian influence or “America tampering,” this is it. As High Times reported in 2014, Russian young people, mostly males, have been sneaking their way into that country highest buildings and then balancing themselves on delicate precipices, sometimes by their fingertips and sometimes by standing on one leg while simultaneously utilizing the selfie, photography’s suspect stepchild, to prove that they were there even though good Photoshop would produce the same effect without endangering life or limb.

Russia’s influence on wannabe roof-selfie photographers was also noticed in 2014 when the Washington Post published a feature on “the daredevil photographers racking up thousands of Instagram followers,” who “hopscotch the globe, snapping city scapes in the world’s great urban spaces.” The article referenced Russia as the prime influencer.

Perhaps Philadelphia can take a perverse pleasure in the fact that the out-of-town bridge climbers thought of Philadelphia as “a great urban space” worthy of the kind of world-class stunt you usually read about happening in New York. It’s nevertheless shocking to me how it never occurred to these daredevils, who were practically in diapers on September 11, 2001, that they might be mistaken for terrorists, since dressing in all black and climbing to the top of a major transpiration artery is about as high alert as you can get in the new national security state.