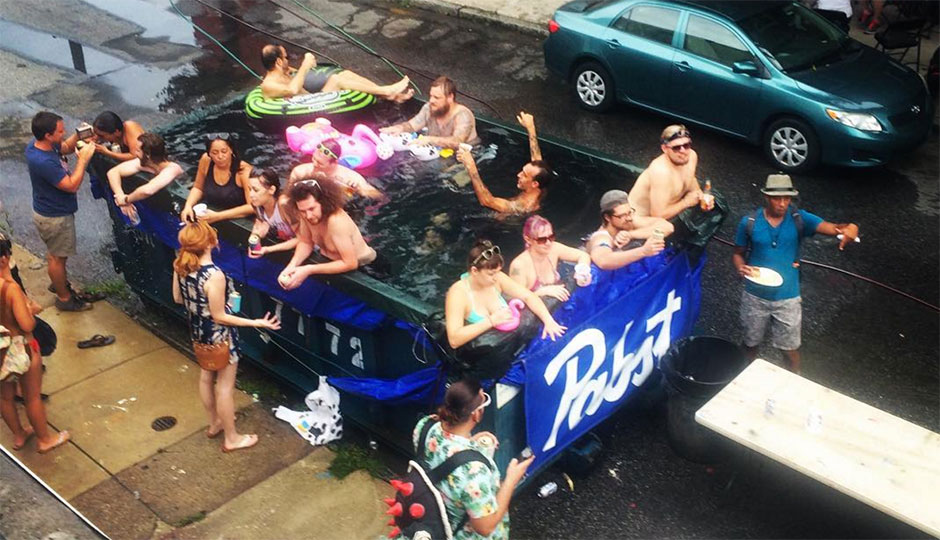 We like our 70 public pools. We like our mystical Devil’s Pool, even if it’s a little dirty and dangerous (and illegal). And when we aren’t feeling either of those options, we will literally float in water-filled dumpsters.

That was the case at the 2016 Cedar Street Block Party, which became known for having a “dumpster pool” created by neighbors who lined a rented dumpster with tarps and filled it with water from an illegally opened fire hydrant. Unfortunately, the 2400 block of Cedar Street also became very known to the city’s Department of Licenses and Inspections, which promptly vowed not to issue the street any future block party permits because of the dumpster pool, which the department saw as extremely dangerous (and a waste of fire hydrant water).

“We are not screwing around, Philly,” L&I said in a very serious statement last August.

But, like I said, Philadelphians like to swim. Billy Penn reports that this year, organizers of the Cedar Street Block Party handled the heat with a different kind of pool. The second time around, they fashioned an oasis out of orange plastic jersey barriers.

So, to make do, Myers and his neighbors gathered a bunch of plastic road barriers, arranged them in a 12-foot by 8-foot rectangle, put some astroturf on the bottom, covered the inside with waterproof tarps, tied the barriers together with ratchet straps and filled the pool with water from a garden hose.

Behold: the jersey barrier pool. Not quite the same as a dumpster pool (which is the only type of public pool in Brussels, Belgium, by the way) or a pickup truck pool (which Fishtown has also been known to utilize). But still functional.