Bring the Eagles Training Camp Back to Lehigh!

Trekking to Bethlehem to watch the Birds practice was a magical summertime tradition. 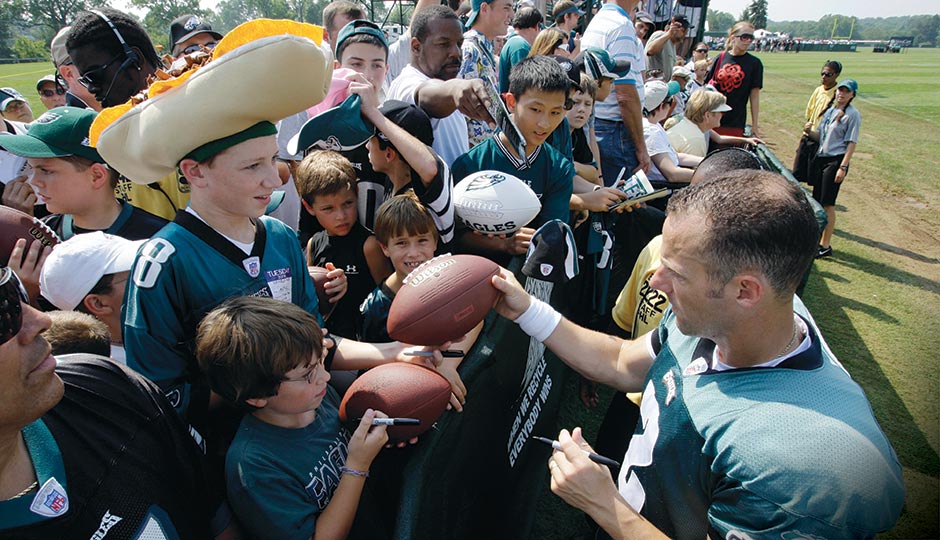 I feel sorry for the younger generation of Eagles fans — and not just because our beloved team hasn’t won a playoff game in nearly a decade. The July humidity has me feeling nostalgic for when the sun and the Eagles’ fortunes were bright. The two places my mind tends to wander when reminiscing about halcyon childhood summers: the Shore (duh), and Eagles training camp in Bethlehem, where the team got into game shape for 17 glorious Augusts from 1996 through 2012.

A trip to watch the Birds work out at Lehigh University started like any trip to the beach. Mom and I would get up at some hellish hour and pack the car with all of the essentials before heading on our way. (Pro tip: You can never have too many Goldfish). The trip up the Northeast Extension felt like an eternity in my younger years, but it was always, always worth it.

Walking through the inflatable midnight-green helmet onto the Lehigh practice fields was like that scene in Rudy when Ned Beatty, playing the title character’s emotionally absent father, first sees Notre Dame Stadium: “This is the most beautiful sight these eyes have ever seen.” With the promise of meeting the mighty Philadelphia Eagles up close and personal, that dingy college turf was just as sacred for any young fan.

Today, training camp happens more or less behind closed doors at the team’s practice facility in South Philadelphia. And it’s a damn shame. Spectators were always welcome at Lehigh, but now fans only get to see the Eagles practice twice over roughly three weeks of camp. And it’s at the Linc, which simply can’t compare to the intimate atmosphere of Lehigh in the summertime.

I recall one sweltering day in Bethlehem when a rehabbing Correll Buckhalter called me into the medical tent to hang. I’ve been lucky enough to meet childhood heroes like Brian Dawkins and Troy Vincent. That unique fan interaction is what’s missing from this current training camp setup, and it’s depriving youngsters of the opportunity to make indelible memories that strengthen the bond between devotee and idol.

And wasn’t getting away from the media circus in Philly good for players, too? Lehigh was the Eagles’ home away from home for all those years, but the team chose convenience over charm when moving operations to the NovaCare Complex in 2013 — Chip Kelly’s first year as head coach. Training camp, once such a special time for fans and players, hasn’t been the same since. The Eagles need to do right by the fans and move back to Lehigh. Immediately.

A Brief History of Summer Birds-Watching

1933: Bader Field, Atlantic City
The Eagles spend their very first training camp down the Shore, practicing on the site of a now-closed airfield ahead of the team’s inaugural season in the NFL.

1973–79: Widener College, Chester
A local substitute teacher named Vince Papale makes the Birds out of camp as a 30-year-old rookie in 1976.

Published as “The Hot Take: Bring Training Camp Back to Lehigh!” in the August 2017 issue of Philadelphia magazine.