In the viral footage, an officer appears to throw a handcuffed man into the side of an aboveground pool. 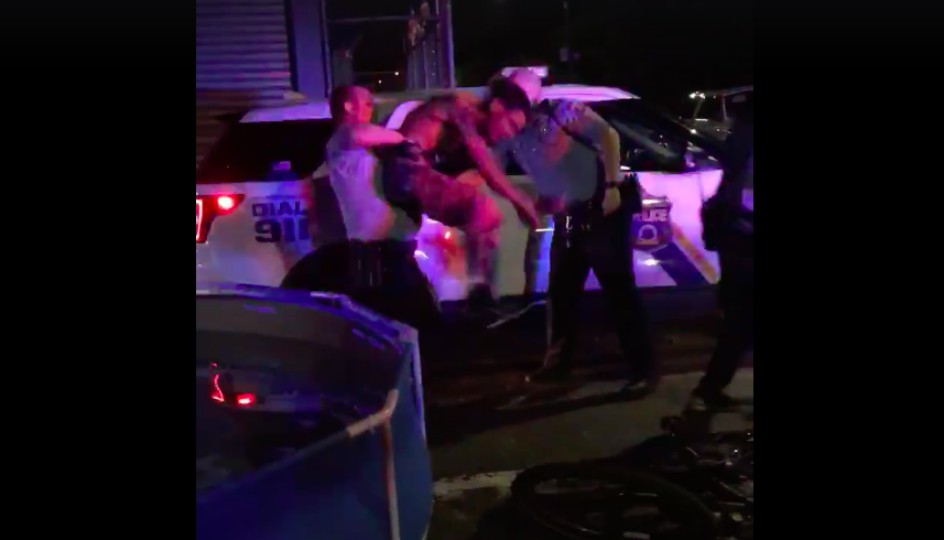 The Philadelphia Police Department is investigating a controversial video of an arrest that occurred Monday in Kensington.

The three-minute video, posted by a resident named Ariel Rivera, has been watched more than 360,000 times as of Wednesday morning. It was reportedly filmed near Elkart and Ella Streets just after midnight.

Footage reveals three police officers attempting to arrest a shirtless man, who is handcuffed and lying on the street in the beginning of the video. About 20 seconds in, one of the officers lifts and pushes the man against the street twice, striking him against the ground. Onlookers yell and step closer. One woman shouts, “There’s kids around!”

The officers then carry the man and attempt to put him into a police SUV, but the man appears to throw himself on the ground. A cop then places a baton under the man’s chest, picks him up from behind and swivels around. When he drops the man, the man’s head smacks against the side of an aboveground pool in the middle of the street. The officers then put him inside the vehicle.

Police declined to provide details on the man because of the ongoing investigation. A spokesperson said he was arrested for a narcotics violation. His condition was not available Wednesday. Around noon on Tuesday, Philly.com reported that he was in the hospital.

The video has been shared more than 6,000 times. Its comments are mixed, with some people claiming the man appeared to be resisting arrest and others calling the video evidence of police brutality.

Rivera, 24, told Philly.com that she recorded the video and pushed for people to share it “because this isn’t something that happens once in a blue moon in our neighborhood, this is very common.”

“A lot of people go through stuff like this,” Rivera told the news organization. “Our community is bad enough already, to be honest, we should not have to fear calling the police.”