What If Philly Had Its Own (Nonviolent) French Revolution?

Nickels: It wouldn't be led by University City socialists. No, it'd be the Ax-the-Bev-Tax masses rising up! 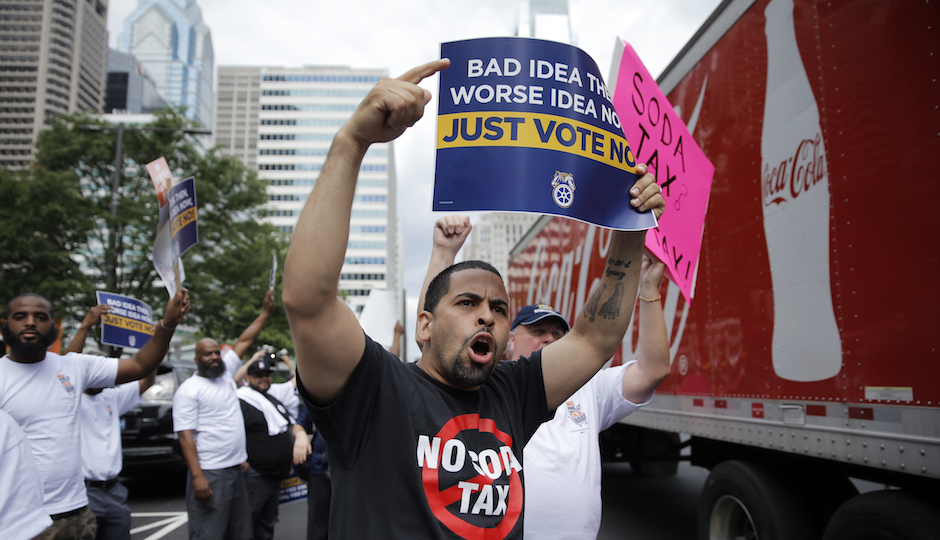 Opponents of the soda tax demonstrate outside City Hall in Philadelphia in 2016, shortly before the legislation was passed. | Photo by Matt Rourke

The French Revolution occurred in stages over many years and left more dead bodies than multiple 9/11s. Time, however, has a way of romanticizing history’s bloodiest events. This is why the faux beheadings and mob violence at the Bastille Day Festival at Eastern State Penitentiary on July 14th will be celebrated with camp flare and bearded ladies thrown in for extra laughs.

Spectators will witness Tastykakes being thrown from the prison towers and a dirigible-like baguette that will float over the heads of people with pitchforks.

But imagine, for a moment, if a real French Revolution took place in Philadelphia. What would it look like?

Philadelphia’s very own Bastille Day will come not from University City socialists who want the city to be more like Bernie Sanders’ beloved Scandinavia, but from the Ax-the-Bev-Tax multitudes, a/k/a the majority of Philadelphians called the “soda peasants” by Mayor Jim Kenney as he sits in soda-free City Hall, where it is said that he spends his days lamenting the fact that his tax plan has flopped miserably, though he keeps hoping for a miracle.

A protest headed by a Philly-style Robespierre, state Sen. Tony Williams, supported by those heroic Council members who voted against the tax — Al Taubenberger, David Oh, Brian O’Neill and Maria Quiñones Sánchez — will inaugurate Bastille Day with a march on City Hall, joined by members of Teamsters Local 830 minus the 155 members laid off because of the tax. The group will disrupt City Council’s first fall meeting, with Teamsters members jumping from the upper galleries in a duplicate replay of what happened in Paris in 1848, as observed by Alexis de Tocqueville: “The people did not pour into the Chamber — not yet — but rather infiltrated it little by little, one at a time. Minute by minute, someone new appeared. It was inundation by infiltration.”

In the City Hall courtyard, crowds will chant about the pleasures of Pepsi, Arctic Splash and whole juice with light sugar additives.

The deadpan expression on the mayor’s face as he watches the mob invade City Council chambers will evoke the indifference of Marie Antoinette. Kenney will place a call to ex-New York Mayor Michael Bloomberg, the nation’s nanny expert and unofficial consultant to other U.S. mayors on the subject of raising taxes on foods deemed “unhealthy.” Kenney, after all, doesn’t think much of soda-guzzling peasants. His idea had always been to get them to love V-8 juice. “Let them drink Philly water!” he was heard to say on more than one occasion. “We know what’s good for them!”

He will ask Bloomberg for advice — “My chambers have been invaded!” — just as a thunderous crash is heard. The sound will not be Helen Gym doing gymnastics, but the entrance of the unruly, soda-hungry mob from the courtyard as a few desperate pro-tax Council members try to placate them with cries of “Stop, here’s some Mountain Dew!”

But it’s too little, too late, as they say, because the Ax-the-Bev-Tax mob will continue to proceed in the French manner, just as de Tocqueville reported from the streets of Paris in 1850 that “women played as great a role as men. While the men fought, the women prepared and carried munitions.”

When French peasants mobbed the Notre Dame Cathedral, they broke the glass-stained window. Philly’s mob will be much more subdued, especially when the pro-tax Council members disperse and the mayor rushes to the highest point in City Hall tower, where he won’t find a single Tastykake or bearded lady.

A “real” Philadelphia Bastille Day, of course, will not involve hangings or the guillotine, but it would entail having all the pro-Bev Tax Council members march en masse as POWs to the businesses hurt by their vote, after which, in the civilized manner of William Penn, they would be forced to apologize and then makes their words count by reversing the tax.

This is as good as revolution gets in Philadelphia. After all, we already have sanctuary city status, a new LGBTQ rainbow flag, and a lot of other progressive stuff, so there’s really nothing to protest … except the nanny thing.