Muralist Evan Lovett found inspiration in the tiny creatures living among us for his latest Visual Urban Renewal & Transformation piece. 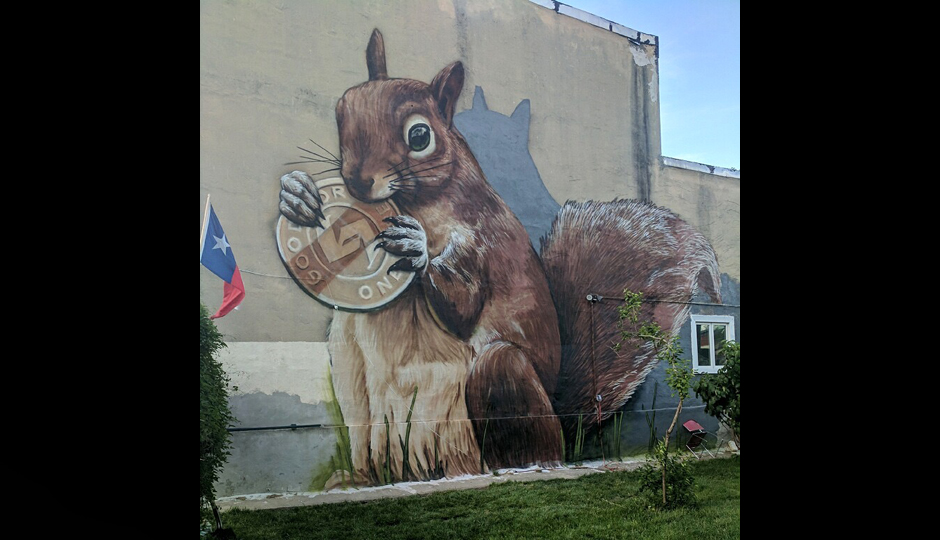 Evan Lovett’s zany new mural on the border of Kensington and North Philadelphia has captured hearts for its lifelike depiction of a cute and cuddly squirrel, coupled with its inclusion of a soon-to-be bygone symbol of SEPTA ridership. (Are people really feeling nostalgic for tokens already?)

But without one key suggestion from a local homeowner, this art installation on the 2200 block of North Hancock Street would be a lot less Philly-centric.

Lovett told Philly Mag that while painting a gigantic squirrel was his own idea (his Kensington pigeon was the first in Visual Urban Renewal & Transformation’s Local Critters project), the idea to have it feasting on a SEPTA token came straight from the brain of the person who donated the wall for his mural.

“When I first came up with the design a year ago I didn’t know that SEPTA would disband the token,” Lovett said. “When it came time to paint the piece, it just became relevant.”

Lovett said other small items were also considered, but he and the VURT team were looking for something more closely connected to the neighborhood in which the piece was going up. Given the close proximity of the El, the homeowner’s suggestion of a SEPTA token was just what they were looking for.

@evanlovett_art going at it on our latest project! Finished photos coming soon. Also big thank you to @eversdad @ifilmstuff @blkelly for all the help and support!

It took Lovett about ten hours to paint the mural, which he completed all in one day after the weather wouldn’t cooperate during several previous attempts. Another VURT artist, Anthony Enochs, helped Lovett fill in the squirrel.

“I couldn’t have gotten it done without his help,” Lovett said of Enochs.

As for what’s next, Lovett said he’d love to paint murals of a raccoon and a possum, and maybe even some chickens too.