Roughly 30 employees across the nonprofit’s three Philadelphia offices briefly walked off the job following reports of an investigation of the center’s medical director. 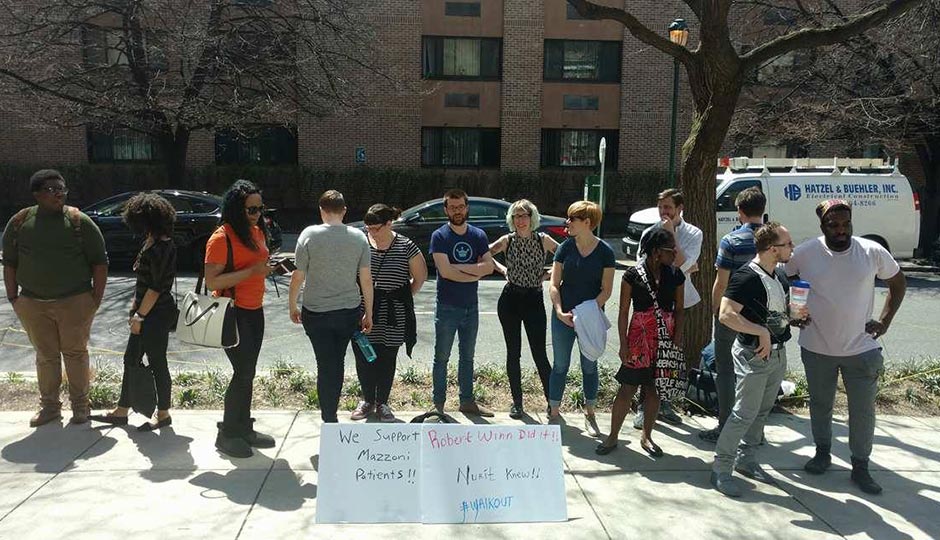 On Tuesday afternoon, a day after G Philly reported that sources connected to Mazzoni Center claim that the organization’s medical director, Dr. Robert Winn, has been suspended pending the outcome of an investigation, a group of the nonprofit’s employees participated in a protest walkout.

“A medical director is being suspended on investigation of possible misconduct,” said a Mazzoni case manager at the walkout who requested not to be named. “Our executive director [Nurit Shein] has been silent as these issues have been looked into — not acceptable.”

A story published on Tuesday morning by Philadelphia Weekly cited anonymous sources closely connected to Mazzoni as being aware of alleged “sexual misconduct” by Winn. One of the story’s sources, a former employee, claims that in 2011 a client confronted them about “a series of sexually explicit texts he received from Dr. Winn.” [Editor’s note, 4/14/17: The version of the PW story linked above that Philadelphia magazine viewed on Tuesday morning is no longer online; on Wednesday the publication reported that, according to a former Mazzoni board member, sexual misconduct allegations against Winn first surfaced as many as five years ago.]

A Mazzoni spokesperson confirmed to G Philly on Monday that Dr. Winn is currently on paid leave but could not provide any additional information. Mazzoni has not responded to new requests for comment about the allegations and the walkout.