We hope you didn't just buy a Nissan Leaf. 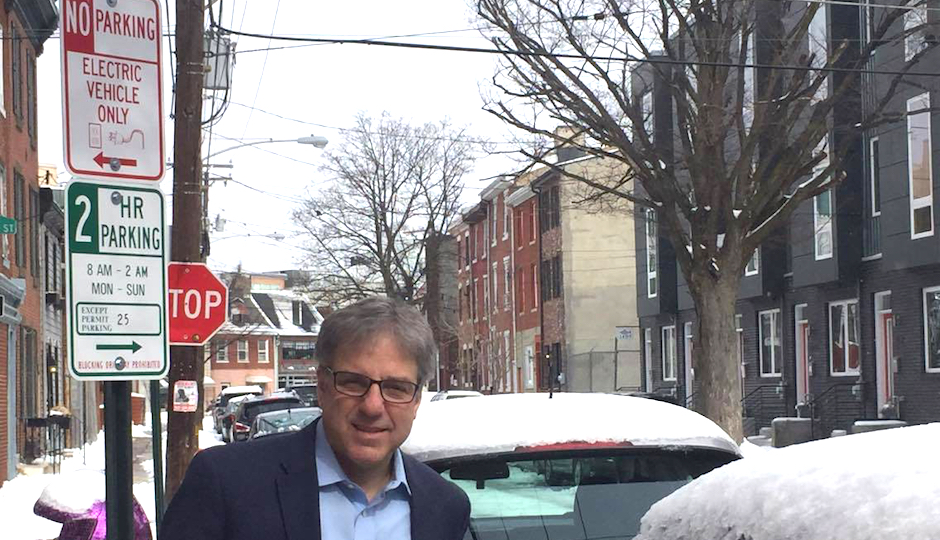 Fishtown resident Jonathan Fink is one of 51 residents to have obtained a permit for an electric vehicle parking space.

If you live in a major American city and you own a car, parking is, undoubtedly, one of your biggest frustrations. But imagine if you have an electric car that you don’t just need to park — you’ve also got to plug it in.

Of course, this all isn’t some charity. There are application fees, permit fees, PPA fees, and then there’s the cost of the charging station, which can run upwards of $3,000 installed. All together, say electric car owners in Philly, you can expect to spend somewhere between $4,000 and $5,000, not counting your monthly electric bill increase and the $150 annual permit fee. Still, it is very convenient. To date, there are 51 such spots in Philadelphia.

But as of this week, the city may institute a moratorium on new electric vehicle parking zones. The existing zones will remain in place (though some electric car owners worry that they actually won’t), but there are 12 in-limbo applications that may not be approved. A public hearing is scheduled for Tuesday at 10 a.m. in City Hall.

There have been complaints about the program.

Imagine if you’re driving around for 20 minutes looking for parking. You wind up in a spot about three blocks from your home, and as you’re walking up your street, you see your neighbor in his little electric car sliding right into a spot in front of his house. He barely gets his Birkenstocks dirty walking to his door.

Daily News columnist Stu Bykofsky headlined his 2015 article on the subject “How the Rich Steal Parking Spots from You,” writing that “it’s bad policy — and unfair — to give EV owners private possession of public space.”

Ironically, one of the reasons for the proposed moratorium is that electric cars have gotten so much cheaper than they were ten years ago. Considering the tax credit given to electric vehicle owners by the federal government, you can get into a brand-new electric car for well under $20,000, and a used Nissan Leaf for under $10,000. Not exactly a rich person’s car.

And due to the lower prices, Philadelphia City Councilman Mark Squilla is concerned that residents are going to start buying electric cars just so they can get more convenient parking spaces.

“People see an opportunity now to, as parking gets harder and harder in our neighborhoods, to have a parking spot designated for them in front of their homes, by just receiving an electric vehicle,” Squilla said at a hearing on the subject on January 30th.

But as electric vehicle owners in Philadelphia see it, the moratorium doesn’t make any sense. They’ve been footing the bill themselves to develop a previously nonexistent electric vehicle infrastructure in the city. And, they point out, an electric vehicle parking spot doesn’t actually belong to any one person. There’s no “private possession,” as Bykofsky referred to it.

“I was so proud of this program,” says Fishtown resident Jonathan Fink, who obtained a permit for an electric car spot on his block of Marlborough Street. “I was excited to be a part of it. But now I’m disappointed. The city isn’t as innovative as I thought.”

According to Fink, he has had “zero negative feedback” from his neighbors — not one person has complained to him about the spot.

“Actually, it’s quite the opposite,” he tells us. “People passing by say things like, ‘It’s so neat that the city is doing this’ and ‘Oh my God, this is so cool!'”

Jim Engler, the deputy mayor for policy and legislation, says that his office will be testifying in support of the moratorium on Tuesday and promises that that the city will find a way to accommodate electric cars in the future.

“The original bill was intended to spur EV development,” Engler points out. (The original bill was sponsored by then-Councilman Jim Kenney). “[The Mayor] is happy with where we’ve gotten over the last several years, and as the market continues to grow, we need to look at a whole menu of options.”

“They should consider speaking to the stakeholders, like electric vehicle owners,” suggests Fink, who says there wasn’t one electric car owner at the January 30th meeting. “They suckered us into this thing. And now they’re hanging us out to dry, and we’re looking like the bad guys. The ‘rich’ guys.”